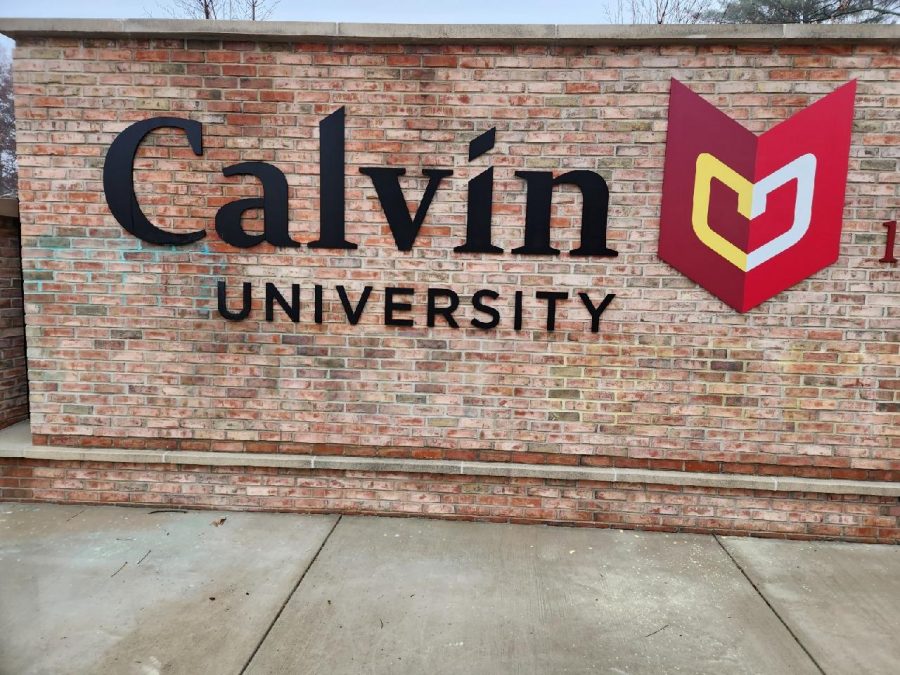 Campus Safety removed the message from the Burton Street sign about an hour after it was written.

A Calvin student wrote “antisemitism here?” on the Calvin University sign facing Burton Street. The Dec. 10 act came five days after an Instagram post made by the university’s chapter of Turning Point USA drew backlash for advertising an event with the theme of Kanye West, who recently made headlines for making a series of antisemitic comments.

Campus Safety reported in the week’s crime log that “Campus Safety officers responded to a report of an individual vandalizing the Calvin University sign at the Burton Street entrance to campus. An unknown individual was observed painting the brick wall by students as they entered campus from Burton Street.”

The individual was no longer present when Campus Safety officers arrived. A vandalism report was filed with the Grand Rapids Police Department.

TPUSA is a conservative nonprofit organization that helps students organize around issues of free markets and limited government. The Calvin chapter was chartered by the Campus Involvement and Leadership office this year after two years as an unofficial student organization.

The chapter posted to Instagram on Dec. 5, advertising their final gathering of the semester. The post included a photo of the rapper Kanye West in a Christmas hat and the words “Kanye Club.” The image also stated that “Turning Point USA does not endorse anything that Kanye has said, it’s just funny to see all the crazy stuff he is saying and we needed a theme.”

The post faced backlash on the app. Several students condemned the post due to West’s recent antisemitic comments and called for a response from Calvin administrators.

In response to a student comment on the post stating that the idea of combining a Christmas party with a discussion of West was “out of touch,” a spokesperson for the club said “the educational spin was meant to be a criticism of the antisemitism and the hate from West. It clearly was a bad idea to do both and we’ll definitely consider removing the Christmas part.”

TPUSA student leadership removed the post the same day and posted a statement clarifying that the event was intended to be informative and condemning of West’s recent statements. The statement also noted that the chapter is taking disciplinary action within its team in response to the incident.

Five days after TPUSA’s advertisement was posted, a student used a paste of flour, food dye and water to write messages condemning antisemitism in various places on campus. The message on the Burton Street sign was painted sometime between midnight and 1:30 a.m., according to the Campus Safety report, and removed shortly after.

Other messages written on the pavement outside Commons and on a sidewalk between the Science Building and the chapel, read, respectively, “Christmas is about Jesus, not Kanye” and “Love + Need U” under an image of the Star of David. These messages were not immediately removed.

In an email to Chimes, Executive Vice President for Student Experience and Strategy Sarah Visser said TPUSA’s post “represented a serious lack of judgment.” The university directed TPUSA to cancel the event advertised in the post, according to Visser.

“As for the graffiti, the university provides a wide range of avenues for members of the community to express themselves,” Visser said. “Vandalism is neither an appropriate nor particularly effective form of expression, and anyone found to be engaging in vandalism will be subject to disciplinary action.”