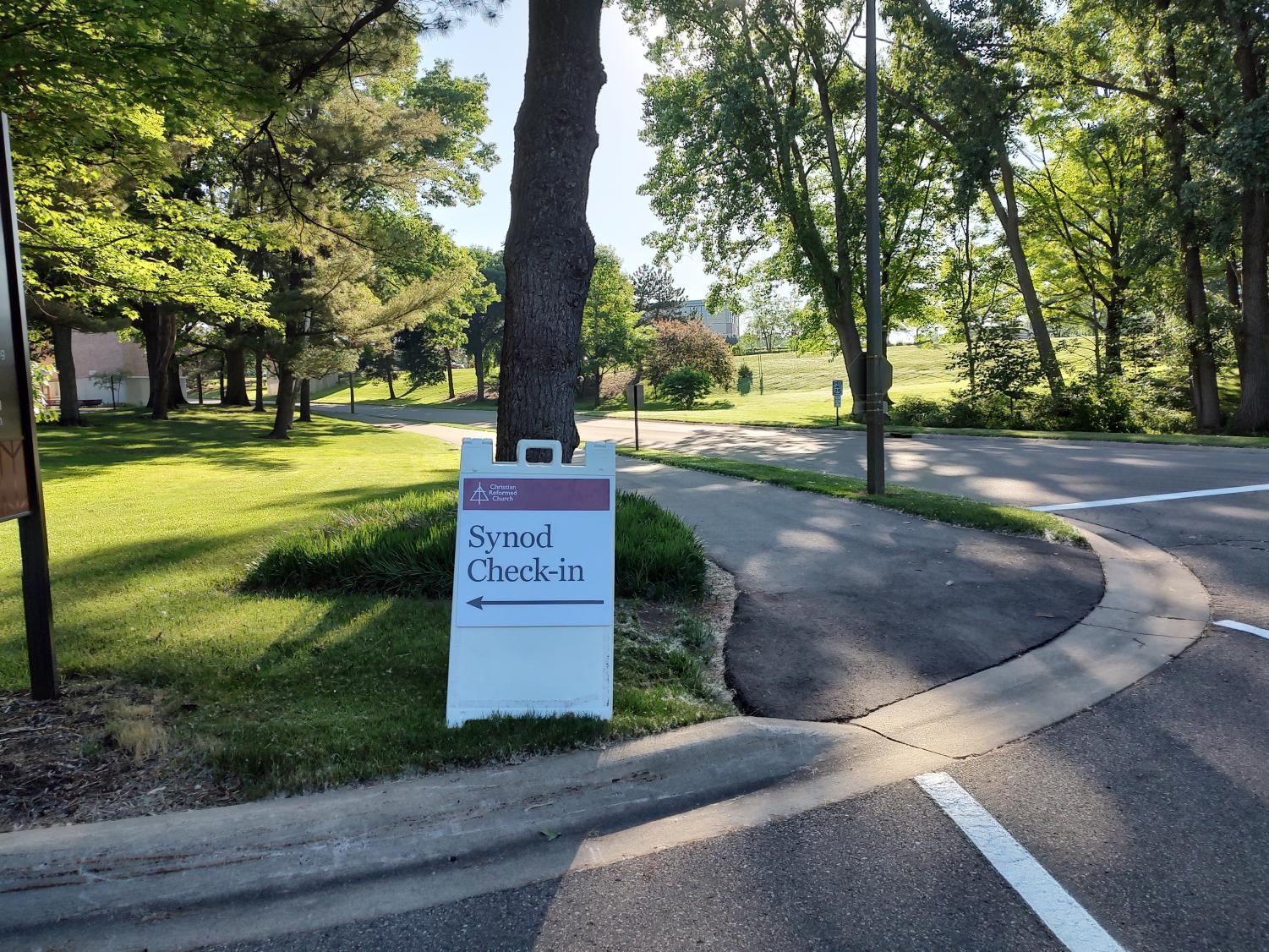 The CRCNA’s Synod 2022 meetings are underway on campus. (Photo by Abigail Ham)

The CRCNA’s Synod 2022 meetings are underway on campus.

The Christian Reformed Church in North America — Calvin’s denominational mother — opened the in-person portion of its Synod 2022 meetings last week at the university chapel. While the gathering’s main current impact on campus is a parking nightmare, the discussions happening this week could have serious and long-lasting ramifications for the university.

Synod is the annual leadership meeting of the CRCNA. Delegates from each of the denomination’s classes (regional clusters of congregations) gather on Calvin’s campus. Each delegate is appointed to an advisory committee, which shapes and presents a report on a given issue to the general assembly. Advisory committees met in the Covenant Fine Arts Center this weekend and general assembly discussions are now underway.

This year’s synodical agenda shares space with two years of deferred agenda items, including discussion of the much-talked-about human sexuality report, which was released in 2020 and argues that the denomination’s stance on sexuality is already confessional.

Here’s what you need to know about the human sexuality report, the meetings and what’s to come for Calvin.

Sherman Street CRC, a reformed congregation near Calvin, brought an overture to Synod in 2011 seeking the formation of a committee to study and reconsider the denomination’s position on LGBTQ+ issues. Although same-sex marriage had been legal in Canada, where about 25 percent of CRCNA churches are located, since 2005, Synod declined that overture, arguing that there was not sufficient new information to make it worth reconsidering.

Same-sex marriage was legalized in the U.S. in 2015. The following year, former Calvin professor and acclaimed reformed philosopher Nicholas Wolterstorff announced his support for same-sex marriage. In the same year, Classis Grand Rapids East, which encompasses the congregations in the vicinity of Calvin, issued its own report on the issue, arguing that the denomination should agree to disagree, as it does with the issue of women in church leadership.

At Synod 2016, a study committee was appointed to put together a report developing a “foundation-laying biblical theology” on sexuality.

The committee released its report in October 2020, a month after Neland Avenue CRC in Grand Rapids faced backlash for appointing a deacon in a same-sex marriage. In December, one-third of Calvin faculty signed a letter expressing concerns about the report to President Michael Le Roy and the Confessional Commitments and Academic Freedom Committee. Numerous professors also expressed their disagreement and concerns on social media and in private faculty forums. In February 2021, Synod 2021 was postponed due to concerns about the spread of COVID-19, delaying the denomination’s formal consideration of the report.

The Reformed Church in America, the CRC’s close denominational cousin, has been facing internal controversy over similar issues. In January 2022, at least 43 congregations split from the denomination, leaving the remainder concerned about the denomination’s long-term financial viability.

Tensions have also run high within the CRC. After two years of deliberation, First CRC of Ripon, California, disaffiliated from the CRC last month, citing the congregation’s desire to take more conservative positions on LGBTQ+ issues and gender roles than the denomination as a whole. In February, Classis Minnkota, which includes congregations in southwest Minnesota and South Dakota, declined to participate in a delegates’ prayer group that also included members of Classis Grand Rapids East. Classis Zeeland submitted an overture suggesting that all office-bearers of Classis Grand Rapids East be publicly admonished and unseated from Synod 2022 for failing to act on Neland Avenue CRC’s appointment of a deacon in a same-sex marriage.

The denomination’s current official stance remains that sex is reserved for one man and one woman in marriage. Under this definition, all sexual activity outside of heterosexual marriage is considered sinful. Same-sex orientation, however, is not considered a sin. The question facing Synod is whether that stance is confessional. Confessions rank just behind scripture and the creeds in terms of authority for doctrinal and moral teaching in the CRC — a designation with less wiggle room for disagreement than the stance’s current status as pastoral guidance.

This week, Synod will consider numerous overtures regarding the human sexuality report.

The classes of Holland and Minnkota have asked Synod to adopt the recommendations of the report. Those asking Synod to not adopt all or part of the recommendations include Classis Grand Rapids East and Classis Toronto as well as members of First CRC in Denver, the councils of First CRC in Toronto, Ann Arbor CRC, Emmanuel CRC, Lantern Community CRC, River Park CRC and The Road CRC in Calgary, and Fellowship CRC in Edmonton. The Council of Fellowship CRC has also requested the appointment of a new study committee.

While Classis Grand Rapids East and members of First CRC in Denver have requested that the entire report not be adopted, other requests not to accede focused on the recommendations of the report directly addressing the question of confessional status.

All deliberations about the HSR and the Neland Avenue question at Synod will take place in closed sessions.

Responses to the Human Sexuality Report

The report issued in 2020 was intended to be a comprehensive study of human sexuality through the lens of Christian Reformed theology. The report touched on a wide variety of topics including homosexuality [the report’s term], gender identity, sexual desire, premarital sex, divorce, polyamory and pornography.

While going against pastoral guidance can cause backlash, pushing back on a confessional stance could put their orthodoxy at risk”

The report concluded that the denomination’s current stance on sexuality is already confessional, arguing that the 108th answer of the Heidelberg Catechism — “That God condemns all unchastity, and that therefore we should thoroughly detest it and live decent and chaste lives, within or outside of the holy state of marriage” — justifies confessional status. According to the report, “unchastity” covers “all sexual immorality, including homosexual activity.”

The report suggests that confessional status won’t mean the stance is set in stone: “even if a teaching has confessional status, that does not mean there is no room for disagreement within the bounds of that teaching. In addition, the church sometimes allows for pastoral accommodations.” However, Neland Avenue CRC has argued that the status would make a significant difference for individuals and congregations who want to be affirming; while going against pastoral guidance can cause backlash, pushing back on a confessional stance could put their orthodoxy at risk.

The study committee that developed the HSR was composed of 12 CRC individuals, including, according to the committee’s mandate “an African American pastor, a Hispanic pastor, a Korean pastor, three faculty members from Calvin Theological Seminary, a same-sex attracted person, a chaplain, a philosopher and a social scientist.” All committee members were expected to “adhere to the CRC’s biblical view on marriage and same-sex relationships.”

The report insufficiently engages with relevant scholarship from our disciplines, leading to a biased view of the theological, scriptural and scientific basis for the report”

The faculty opposition letter of December 2020 asked university administration to communicate to the council of delegates that adoption of the report “has the potential to negatively impact Calvin University’s status as an academic institution.”

The letter highlighted concerns about academic freedom should the stance be declared confessional and questioned the standard for scholarship used in the creation of the report.

“The report insufficiently engages with relevant scholarship from our disciplines, leading to a biased view of the theological, scriptural and scientific basis for the report,” the letter read. “The discussions of gender identity and sexual orientation lack the scientific and hermeneutic rigor and accuracy of prevailing peer-reviewed scholarship and thereby have the potential to compromise Calvin’s academic reputation.” Signees of the letter represented 20 disciplines including philosophy, religion, psychology, sociology and historical studies.

In a separate letter to the Confessional Commitments and Academic Freedom Committee, English and gender studies professor Linda Naranjo-Huebl outlined further concerns about the research behind the report. According to Naranjo-Huebl, the report cites sources that are minority viewpoints in their fields and misrepresents or overlooks the major work of leading Christian scholars in the field of gender and sexuality, as well as overlooking the contributions of disability theologians.

Naranjo-Huebl told Chimes her letter was acknowledged but none of the issues raised have been addressed.

The most recent update on the CCAF from President Le Roy to faculty was a Feb. 17 email. It highlighted the work of the Colossian Forum, Hekman Library’s resource page on the human sexuality report and a resource guide prepared by the CCAF. The CCAF guide was intended to clarify existing positions of the university, explain the relationship between the university and ecclesiastical process and summarize the university’s approach to confessional commitment and academic freedom. The document was affirmed by the CCAF, the Professional Status Committee and the Board of Trustees.

The CCAF document stated that the university does not take a position on HSR and that faculty, staff and students are free to express a variety of opinions on the report. It also warned of the dangers of expressing those opinions publicly: “We strongly urge any member of the Calvin community who debates the HSR in a public forum to clarify that they are speaking only on their own behalf, not on behalf of the institution as a whole. Likewise, those who read or hear statements from individuals within the Calvin University community should not ascribe those positions to the University itself.”

The document encouraged faculty and staff to direct their responses to the report to denominational channels.

This spring, LGBTQ+ issues were at the center of controversies at the university, driving a split with the former Center for Social Research and the loss of social work professor Joe Kuilema. More than 3,000 students, alumni and community members signed a petition to “end discrimination against LGBTQ+ people” and students, faculty and staff took to sporting “keep Kuilema” stickers and rainbow pins in a show of support for the professor and LGBTQ+ students.

Stakes are high for Calvin faculty, who are required to sign a synodically approved covenant pledging that their teaching, speaking and writing is in harmony with the confessions”

A group of Calvin staff members circulated a petition earlier this month to alter language in the staff handbook to be more inclusive of LGBTQ+ staff.

Stakes are high for Calvin faculty, who are required to sign a synodically approved covenant pledging that their teaching, speaking and writing is in harmony with the confessions.

According to philosophy professor James Smith, some faculty have already reconsidered their place at Calvin due to the university’s handling of LGBTQ+ issues and more likely will.

Smith, who holds the Gary and Henrietta Byker Chair in Applied Reformed Theology and Worldview, told Chimes the HSR is “an embarrassment” and “intellectually facile,” and said he’s hopeful that at least recommendation D – the recommendation suggesting that the stance already has confessional status – will not be adopted. If it is, he said, “the university is going to face very serious challenges.”

On May 25, President Michael Le Roy and board of trustees Chair Bruce Los sent a joint letter to the Calvin community in which they reiterated their commitment to welcoming LGBTQ+ students and colleagues as well as ongoing discussions about LGBTQ+ issues.

“We have become more aware of the ongoing work necessary to strengthen Calvin’s distinctive approach to human sexuality, reflecting the university’s identity as an academic institution in a covenantal ecclesiastical partnership with the denomination,” the letter read. Senior university administrators are working to develop more succinct summaries of current positions, policies, processes and practices, as well as a hiring toolkit and guidelines for hiring managers and other supervisors.

Le Roy and Los have recommended that the board of trustees assemble a task force from across groups of stakeholders – including students, alumni, faculty, staff, administrators and representatives of the denomination – to help provide clarity and “alignment of direction” on issues of human sexuality in relation to the university’s identity and practices.