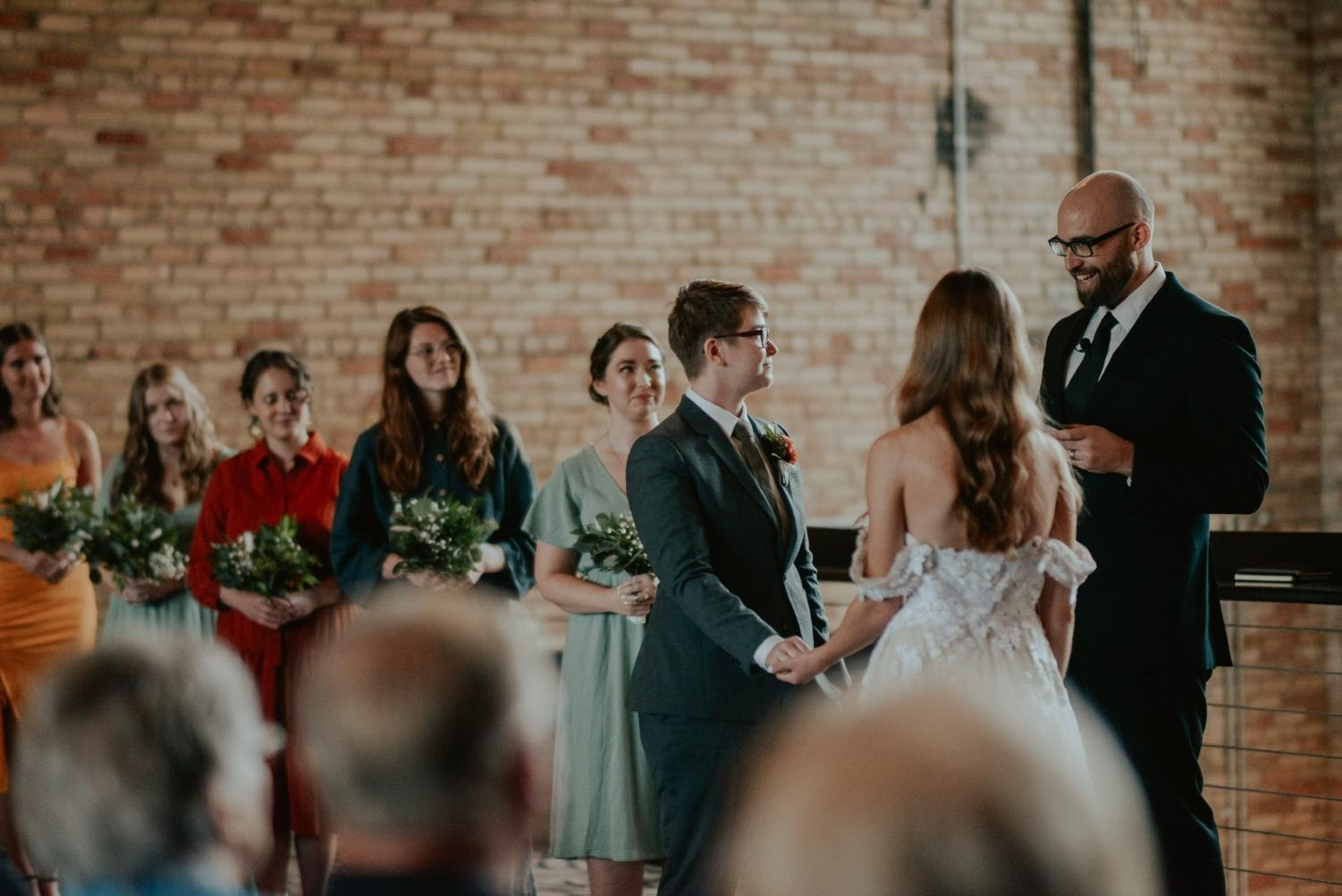 ‘I’m not going to be ashamed’: Queer CSR employee quits to speak freely about split from Calvin

Nicole Sweda didn’t know what to expect when she received an email from the provost’s office on Jan. 24 asking to meet the next day. As a full-time research associate at the Center for Social Research, she worried that perhaps one of the student research assistants she supervised had gotten themselves into trouble.

Although it had crossed her mind, she hardly thought it was possible that her marriage, a queer relationship, could be the reason the university’s chief academic officer wanted to speak with her.

“I was really nervous going into the meeting. I was honestly just trying not to have a panic attack the entire morning,” Sweda told Chimes in an exclusive interview.

When she arrived for the meeting, she was greeted by the provost, the university’s director of human resources, and the dean tasked with overseeing centers and institutes.

The meeting was brief. After beginning with prayer, the provost asked Sweda two questions: Had she been married to Annica Steen (now Sweda), a woman, since the fall of 2021, and had the couple been living together since May 2020.

Sweda answered “yes” on both accounts.

But she wasn’t fired that day. Instead, as Chimes earlier reported, Provost Noah Toly and CSR Director Neil Carlson arranged for the research institute to become a separate legal entity from the university – an entity that could fully embrace the CSR’s desires to be inclusive and affirming of LGBTQ+ employees. Not wanting to cause further issues for the CSR while it remains at Calvin, Sweda quit her job on Monday, March 7.

“I quit to talk freely about this without any fear of repercussions at my job, but also for them, quite frankly,” she said, adding that she may plan to return once the CSR has successfully separated from Calvin.

Calvin’s policies on human sexuality clearly prohibit sexual relations outside of marriage, which the Christian Reformed Church, and subsequently the university, only recognize as “a covenantal union between a man and a woman.”

Under such policies, an employee in a same-sex marriage would be fired, according to comment from the provost and Andy George, director of human resources.

Similar policies apply to students, according to Becki Simpson, director of residence life, though students are much less likely to be married. “Adherence to the student conduct code is an important part of our expectations for all students, no matter their role or position,” she said when asked about how policies regarding human sexuality might affect student employment.

A frequently-asked-questions document published on Calvin’s website under the Sexuality Series event further explains the complicated middle-ground the university attempts to stand on in issues of human sexuality.

The document emphasizes the value of a “caring and diverse community” and notes that derogatory speech, especially based on sexual orientation, is prohibited. It also details all the ways in which Calvin strives to create a community that accepts people of all sexual orientations and gender identities – so long as they don’t engage in sexual relations outside of a heterosexual marriage – an action the student conduct code considers sexual misconduct.

As a queer student at Calvin, Sweda became familiar with the university’s stance on sexuality. But she was anything but prepared when she first entered college after graduating from a large public high school in Rochester, Michigan.

“It wasn’t abnormal that people would come out. It wasn’t abnormal that there were queer relationships – not to say that they were fully accepted, but they just kind of were and no one really said anything … It was sort of like, ‘Yeah, now we can move on and get on with it,’” Sweda said of her high school experience. “So, I sort of came to Calvin thinking it would be similar, which is not true at all. I think most queer students at Calvin realize they’re queer sometime in college.”

Sweda was already openly queer. She came out to her parents years before coming to Calvin and began dating her future spouse in the fall of her junior year of high school.

When it came to sexual orientation and finding community, Nicole and Annica Sweda had radically different college experiences.

“My experience was a violent contrast to what she was having at Calvin,” Annica Sweda, who graduated from Grand Valley State University, said. “It was hard.”

On the couple’s three-year dating anniversary, both tried to celebrate the occasion with on-campus LGBTQ+ groups. Annica shared the anniversary with GVSU’s First-year Queer Alliance and recalled being received with oohs and aahs and even being asked to show pictures and talk about how they’d met.

Nicole Sweda shared news of the anniversary with Sexuality and Gender Awareness, Calvin’s LGBTQ+ student organization, and said she was met with silence and awkward stares. She never went back to another of SAGA’s meetings.

I think the picture that’s painted of the way LGBTQ+ students are treated on campus is not accurate, and I’d rather they’d just say that”

“It’s like just walking through a minefield and hoping you don’t hit a landmine,” Nicole Sweda said. “It’s really on queer students to figure out who is safe to talk to and who is a welcoming presence. Nobody is going to do that for you.”

In her undergraduate years, Nicole Sweda navigated that minefield by becoming close with professors who were affirming of her sexual identity. One in particular was social work professor Joe Kuilema.

When the couple got engaged and planned their wedding for Oct. 15, 2021, they asked Kuilema to officiate.

“We talked pretty in depth with Joe when we asked him to officiate the wedding and said, ‘Hey, we want you to do this for a number of reasons, but we know it might just be an outright no,’” Nicole Sweda said. “And that was fine. We felt like that would be fine and we would be happy we at least asked.”

But Kuilema said yes, despite the issues that might arise due to the university’s stance on marriage.

It’s unclear what repercussions Kuilema now faces, but sources told Chimes that his reappointment decision, normally due before the board of trustees in January, has been delayed. Kuilema declined to speak with reporters.

In 2018, Kuilema’s tenure appointment was not approved by the board of trustees, despite unanimous recommendation from the Professional Status Committee. At the time, some members of the university questioned whether or not his support for LGBTQ+ causes and students played a role.

“There’s this hard switch from when you’re a student to when you’ve graduated that any façade of support – and I do think it’s a façade for students on campus – any part of that is gone with the snap of a finger when you’re no longer a student and you’re not paying money to be there,” said Nicole Sweda of Calvin’s positions on LGBTQ+ issues.

“I want Calvin to be honest. I think the picture that’s painted of the way LGBTQ+ students are treated on campus is not accurate, and I’d rather they’d just say that,” Nicole Sweda said. “I would not have come to Calvin if I knew the kinds of things that were going to happen to me and what was going on. And I don’t think other people would, either.”