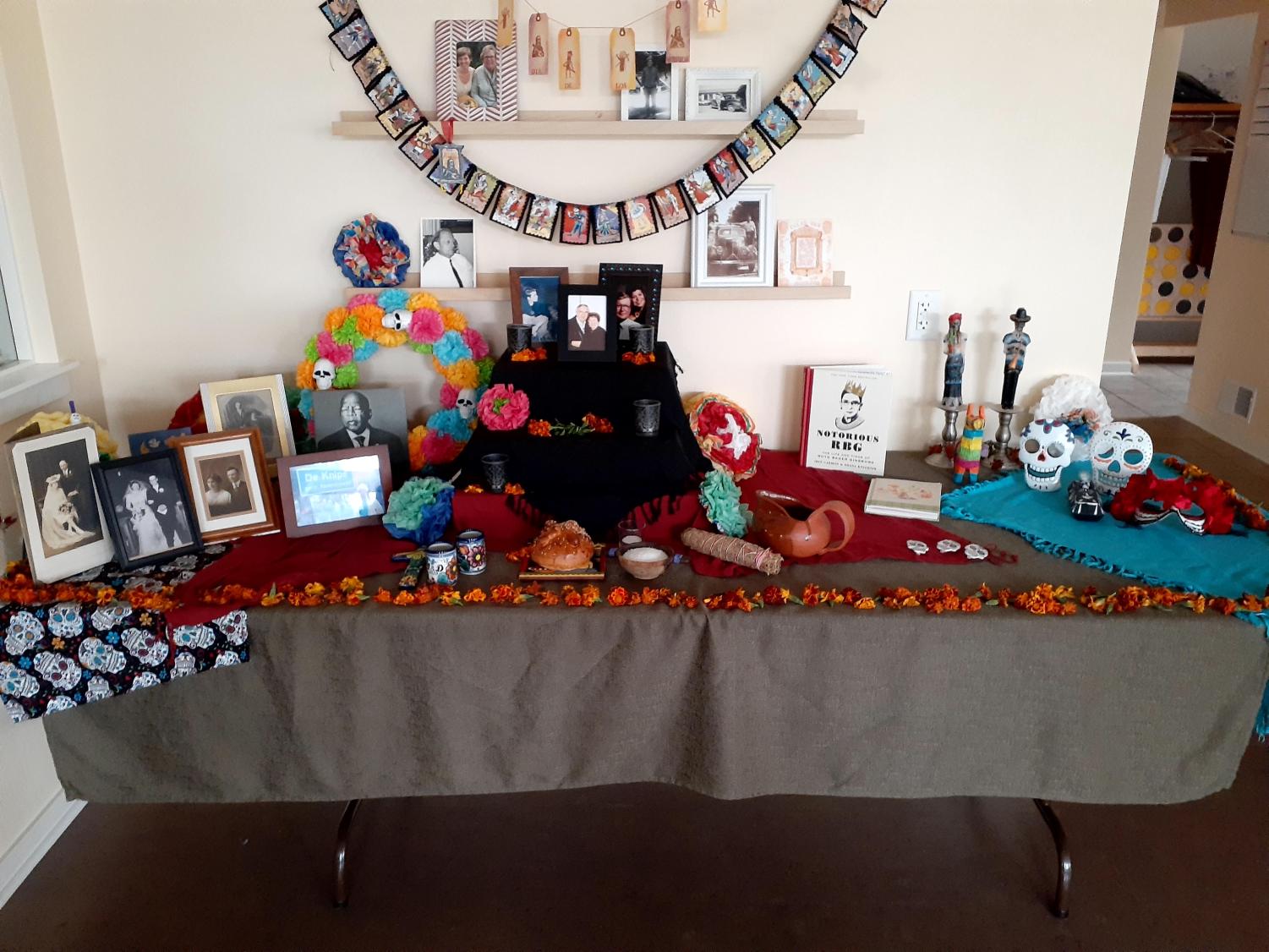 “Calaveritas,” crucifixes, “cempazúchitl” and candles are set upon “la ofrenda.” Family members return home to take part in multi-generational gatherings. The traditional visit to “el cementerio” commences as people come carrying flowers, pictures, and cleaning supplies to tombstones. Voices fill the air as memories of each family member are recalled, creating a song of remembrance.

The Day of the Dead predates Columbus and modern Mexico, with roots in Aztec and indigenous traditions some 3,000 years ago. Throughout the centuries, the tradition of honoring the dead fused with one of the dominant religions in Latin America: Roman Catholicism. The holiday occurs on Nov. 1 and 2, otherwise known as All Saints Day and All Souls Day.

“There isn’t just one indigeous tradition,” Spanish professor Abraham Ceballos-Zapata said. Ceballos was raised in Yucatán, the Mexican state, and although he did not grow up practicing the tradition, he was surrounded by it as it is ingrained in much of Mexican culture. Although the holiday combines indigenous tradition and Christian religion, Ceballos said that it is not about praising the dead.

“It is welcoming the dead, it is not worshipping them,” Ceballos said.

Nora Koster, the Spanish Immersion program director, described how the holiday is a combination of indigenous beliefs and religion; however, she specified that the fusion between religion and beliefs varies based on geographic region. Koster was raised in Guatemala, and while her family honored el Día de los Muertos, the celebrations in the Guatemalan highlands, with a heavy ethnically Mayan population, are different from her own.

In the highlands families spend weeks preparing giant colorful kites to fly on the holiday, according to Koster. “It is a beautiful, colorful display,” Koster said.

Always included are candles, cempazúchitl (marigolds), pan de muerto, sugar skulls, photos of our loved ones who have died, and mementos and food associated with them.”

The idea is that the bright kites will reach their dead loved ones in the sky. The people wear vibrant clothing for the celebration as well, Koster said.

While Koster’s family tradition is still colorful, it takes shape in a few other forms.

“The day of the dead, specifically where I come from, is a family gathering,” Koster said. “It’s a time where everybody goes back home.”

Family members from the capital bring flowers, and when they arrive everyone heads to the cemetery to clean the graves and talk about those who have passed. Then, they go back to the house nearby to eat special foods, such as a candied pumpkin dessert, and continue reminiscing about their family.

Professor Linda Naranjo-Huebl also grew up honoring the Day of the Dead. “Growing up Catholic, we celebrated on Nov. 1 by going to church and, usually, to the cemetery to decorate graves and spend time with our ancestors,” Naranjo said in an email to Chimes.

“In preparation we set up ofrendas in our home, table-top altars, which have different elements with symbolic meanings,” said Naranjo. “Always included are candles, cempazúchitl (marigolds), pan de muerto, sugar skulls, photos of our loved ones who have died, and mementos and food associated with them.”

Naranjo specified that they did not celebrate Halloween, as it was a secular holiday. Koster and Ceballos also emphasized how Halloween has no connection to the Day of the Dead.

“Halloween did not even exist for us growing up,” Koster said.

Nancy Roman, a senior studying social work and Spanish, and Leslie Melendez, a junior studying strategic communication and business, also grew up celebrating the Day of the Dead.

Though Roman was born and raised in Holland, Michigan, her parents are from Guerrero, Mexico and brought the tradition with them.

This person isn’t here anymore; however, there are things I can do to say thank you for the time they spent with me and the love they gave me.”

Melendez is from San Salvador, El Salvador. “I would go with my parents to a cemetery and visit my dead family members,” she said.

To Roman, the Day of the Dead is special because of the memories she shares with her grandmother.

“When someone has passed away usually there’s a lot of grief, there usually isn’t room to celebrate that person; with el Día de los Muertos it’s more of a moment of an understanding,” Roman said. “This person isn’t here anymore; however, there are things I can do to say thank you for the time they spent with me and the love they gave me.”

Similar to Koster, Melendez would visit the cemetery with her family and visit their family tombstones. “It’s a day where Salvadorians pay tribute to those who have passed away,” Melendez said.

Looking to the future, Melendez hopes to continue the practice. “I feel like it’s a tradition that I have gone through since I was a kid,” Melendez said. “I would love to keep that tradition for my kids or my future family because it’s a special day where I can reflect and think about what that person meant to me.”

“It’s a reminder that they can be gone physically, but spiritually they are still with us,” Koster said.