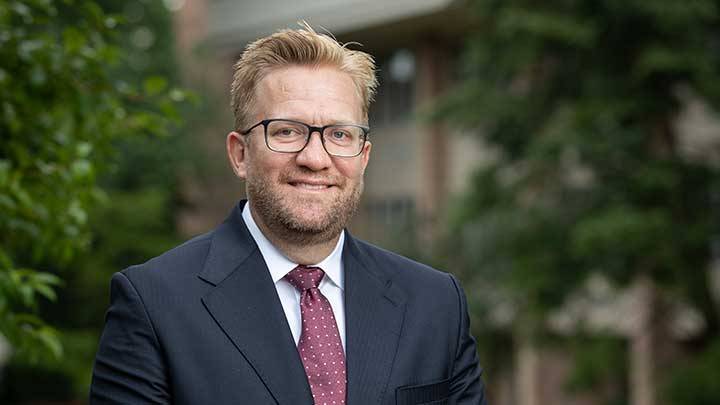 After speaking to friends, family members and other Calvin alumni, Boer finally applied for the President position on the very last day that the application was open.

For some people, home is a simple thing.

“If you ask me, ‘Where are you from?’ [my answer] depends on how long I have to talk to you,” Boer said. “If it’s someone that I’m seeing in passing, I’ll just say I am from Grand Rapids, because it’s where my house is now. [But] if it’s someone with whom I have more time, I will say I am from Nigeria, where I grew up.”

In many ways, Calvin’s newest president defies categorization. His life thus far has been characterized by a dynamic vigor: from Jos to Nairobi to Grand Rapids, he is known for sparking change wherever he goes. Boer told Chimes it felt like a call from God — a “Jonah moment,” as he termed it — brought him back to Calvin.

Boer’s childhood in Nigeria was — in a word — “magical.”

Born to Christian Reformed missionary parents, Boer spent the first few years of his life living in Baissa, a remote part of Nigeria. “Very few people there spoke English,” Boer said. “I spoke Hausa [a native language] before I spoke English as a kid.” Although English is now his primary language, he still speaks Hausa fluently.

After a few years, his family moved to Jos, a city in northern Nigeria. Boer’s childhood memories are anchored there, in a place that he fondly described as “one of the safest places in the world” at the time.

The community was religiously diverse but without tension, according to Boer. “The Muslims would go to church with us. We would go to the mosque with them,” he said.

Boer attended an international missions school in Jos. About half of its 600 students were Nigerian; the other half comprised students of “every nationality you can imagine,” he said.

For Boer, belonging has always been complicated. “You fit everywhere, and you fit nowhere,” he said of being a “Third-Culture Kid,” a term which describes a person who has lived their formative years between multiple cultures — a person who “has a passport from one country and grew up in another.”

Although he felt welcomed in Nigeria, Boer also felt like an outsider growing up. “In Nigeria, I always wanted to fit in — but I didn’t, and I couldn’t,” he said.

Boer’s appearance made him stand out. “We [Boer and his siblings] had really blonde hair. So if we would go on road trips in Nigeria and stop in a rural area, kids would come running up to us and rub our heads, because they were just so fascinated by how strange we looked,” Boer explained. “Now, looking back at it, that was sort of unusual. But it was something that happened so often that we just got used to it.”

University in the United States

After living in Nigeria for his entire life, Boer applied to several colleges in North America. Calvin seemed the natural choice: both of Boer’s parents had attended, as had his older siblings.

But following in his family’s footsteps didn’t appeal to Boer at first. He “wanted to be different,” so he found himself leaning toward bigger schools, like the University of British Columbia and the University of Michigan.

Boer’s parents hoped he would attend Calvin, but they didn’t wield their influence directly. “They were very smart. They guided me, knowing that if they were the ones telling me, I — as a typical teenager — would have resisted,” Boer said. Instead, his parents used other influential figures in his life to direct him to Calvin.

One such figure was Brian Diemer, an Olympic medalist who coached Calvin’s cross-country team. As a favor to Boer’s cousin, Diemer wrote Boer a letter encouraging him to attend. “So, I was in Nigeria. I was a long-distance runner there,” Boer said. “And I thought, ‘Wow, the Calvin coach knows who I am! This is so awesome!’”

Boer eventually realized that the letter had just been a favor. “But it worked out, because the cross-country experience was one of the best parts of my time at Calvin,” he said. He even taught his teammates some Hausa so they could communicate during races without other teams catching on.

But living in West Michigan was a huge shift for Boer. “It was a shock, because it was the first time in my life that I looked like everyone around me,” he said — and he didn’t like it. “I felt like, ‘I need to make sure that it’s clear to people that I’m not from here.’” So instead of dressing like the typical Calvin student, he wore dashikis — a type of traditional Nigerian garment — and covered his coat in Nigerian cloth.

“It was a bit over the top,” Boer laughed, admitting that, in retrospect, a midpoint between fitting in and maintaining a unique identity might have been healthier. “Eventually, you come to terms with your identity and find your place.”

After graduating from Calvin in 1997, Boer, inspired by his father’s achievements, decided to pursue a doctorate in African history at Yale University.

“I thought I was either going to be a professor or go into the diplomatic corps,” he said. But “while in grad school, I began to realize that I was very entrepreneurially oriented.” So, Boer began to apply for international development jobs — a decision that has propelled his career ever since.

Working in the private sector

By 2010, Boer and his family were established in Nairobi, Kenya, where Boer was working for the Rockefeller Foundation. “It’s a very comfortable place to work,” he said. “Nairobi is an incredibly nice place to live.”

Then, Boer was recruited by a Nigerian banker to build a new foundation in Lagos, Nigeria — a very different city, which Boer described as having “insufficient infrastructure.”

Initially, Boer wanted to stay in Nairobi — but soon enough, “it became clear that it wasn’t really a choice,” he said. “It was sort of a Jonah moment. I was running away from a call.”

The call, Boer said, was this: to “go and teach rich men how to engage with the poor.’’

Ultimately, he obeyed the call.

Boer and his family moved to Lagos, where Boer spent several years learning about leadership and building his network in Nigeria. Many of Boer’s proudest accomplishments occurred during his time in Nigeria. In 2017, Boer began to work for a subsidiary of Shell that invested in Nigerian renewable energy companies. “Solar energy was almost nonexistent” in Nigeria, he said. “We were essentially building the industry.”

According to Boer, foreigners dominate the solar power industry in East Africa. These foreigners are often European or North American social entrepreneurs, whom Boer described as the “evangelists of this generation.” “They have a bit of a savior complex,” he said.

These foreigners’ pervasive influence made it difficult for locals to succeed in the industry. “If you were a Kenyan entrepreneur with exactly the same idea, your ability to get investment capital was almost impossible compared to [foreign entrepreneurs],” Boer said.

So, Boer hoped to create a better situation in Nigeria. “I wanted us to do something different,” he said. “We made a conscious decision that we were going to focus on Nigerian entrepreneurs as much as possible.”

When they thought about the future, Boer and his wife, Joanna, imagined that perhaps they would move to Europe next.

“Every now and then, my wife would ask me, ‘do you think you’d ever go back to Calvin?’ And I would always joke, ‘I’ll only go back as president,’” Boer said. “But I didn’t actually mean it!”

But on one fateful day in 2021, Boer happened to open a Calvin alumni email. He was surprised to learn of former President Michael LeRoy’s intended departure.

Then, Boer glanced through the desired characteristics for Calvin’s next president. “It talked about ‘innovative,’ ‘entrepreneur,’” he said. “I thought, ‘this kind of describes me, strangely.”

After speaking to friends, family members and other Calvin alumni, Boer finally applied on the very last day that the application was open. “I didn’t think I would hear back, because I thought, ‘I’m too much of an outlier.’ And then it just kept going, step by step. And it seemed like it just worked.”

Ultimately, and to his utter disbelief, Boer was offered the position. “It was quite emotional, because my parents had gone here. I had gone here. My wife had gone here,” he said. “This is such an important institution to the community I was born into — and it was asking me to come and lead. It was an honor.”

But Boer and his wife initially had some hesitations. They wondered if they would fit in in Grand Rapids; they wondered if returning to the United States would be like “going backward,” after all their international experience. In the end, though, “it was almost like a second Jonah moment,” Boer said.

“It’s a call to come and carry Calvin to a bigger glory, and to make this the best Reformed institution in the world,” he said.

Now, Boer’s mission is to transform the way Calvin is portrayed.

“It’s been a difficult period, and there’s a lot of talk in the community,” he said, describing the “negativity” of the community’s self-talk as “self-fulfilling.”

Because of this self-talk, when Boer visited Calvin during the interview process, he expected the school to be in a sorry state. “I thought, ‘okay, are the insides of the buildings going to be falling apart and the paint chipping? Are the faculty going to be not showing up for class? Will the students be lower quality?’ That was almost what I was thinking from what was being said.”

But he said that wasn’t the case at all. Instead, he found “world-class” facilities, committed faculty and staff and high-quality students, with an emerging School of Business and School of Health to boot. “So what is the issue?” he asked.

“Let’s better tell our own story,” Boer said. “And let’s not wash our laundry outside.”

This article has been correct to reflect that the social entrepreneurs mentioned were North American, not North African. Chimes regrets this error.