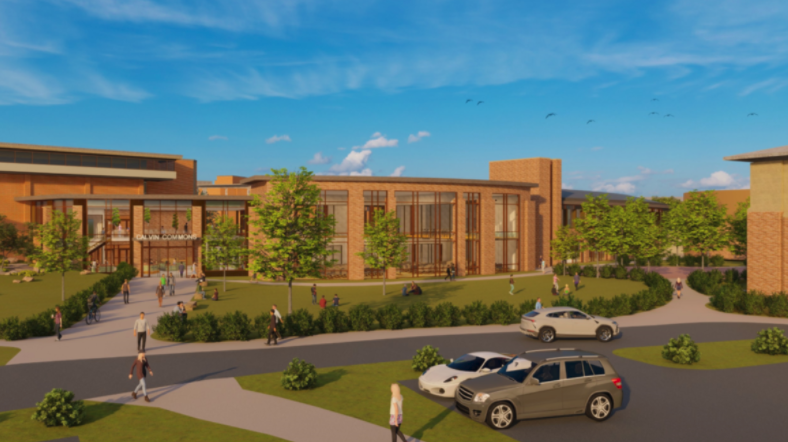 Common’s Union, now renamed the Learner’s Common, is on the docket for construction in the next ten years.

Calvin’s Strategic Budget Review and Calvin Tomorrow initiatives have culminated in a new financial strategy that will shape residence life, athletics, academic programs and the university’s physical campus over the next 10 years.

Very difficult decisions have been made in the past five years or more and it has been a very difficult time for all of you.”

The strategy calls for the university to maximize its existing assets and to increase investment in key areas, including undergraduate residence life and non-traditional program growth. The university plans to operate in a deficit for about the next four years in hopes that the investment increases which that will allow will pay off in the years following, according to documents provided to Chimes by Chief Financial Officer Tim Fennema.

“Very difficult decisions have been made in the past five years or more and it has been a very difficult time for all of you,” President Wiebe Boer told faculty and staff at a finance and planning town hall Sept. 7. “And because of those difficult decisions and what happened we are now in a place where we can start looking to grow.”

Over the last five years, the university has been forced to absorb a $27 million decline in revenue. That decline contributed to layoffs of 12 professors in summer 2020 and two tenured faculty, seven minors and five majors being cut in summer 2021. It also motivated the outsourcing of facilities last year, the implementation of the Voluntary Exit Incentive Program, designed to encourage older faculty to choose retirement, and the ongoing transition from a three to four-two credit hour system.

The strategic review of the university’s budget began in September 2021. The Strategic Budget Review team presented Calvin Tomorrow – an initial three-year budget plan designed to prevent further cuts – to the board of trustees in January 2022, followed by a full plan in April. Fennema presented that full plan, which aims to grow revenue from this year’s anticipated $76 million to about $98 million by 2031, to university employees at the town hall.

Declining undergraduate enrollment has contributed to the decline in revenue over the past few years. But cost-cutting as a reaction to enrollment could undermine the university’s mission, according to Fennema. “You can look at [the decline in enrollment] and go, ‘Okay, how could you be successful at 2500 undergrad students?’ That’s a whole different thing. And when you get to that level it hurts the student experience, it hurts the university,” Fennema told Chimes.

Fennema hopes focusing on investing to grow will help the university be more financially sustainable by reaching enrollment goals by the end of the decade.

An endowment spending increase of $500,000 annually for the next three years will help to facilitate increased investment in brand building, targeted marketing efforts, additional admissions counselors, personalized visit experiences and progress on the university’s Athletic Strategic Plan (developed last year). In Fiscal Year 2023, the university aims to invest a total of about $2 million in these areas in hopes that these will help build toward an enrollment goal of 3,200 undergraduate students in the future.

Typically, financial plans are reassessed after the university’s day 10 census in order to take final enrollment numbers into account. Because the new plan is multi-year and not trying to achieve a balanced budget, it will not be reassessed this year, Fennema said at the town hall.

The university also plans to invest in expanded opportunities for degree completion, graduate degrees and certificate courses, as well as for underserved communities of learners to access programs across the board, with a goal of swelling graduate enrollment to 1,000-1,500.

The overarching goal of these programs is to “deliver what Calvin has to more people in more places on more platforms,” Boer said at the town hall.

“What we’re trying to do is make strategic investments to grow the university. And we’re concentrating on the ones that we think will give us the largest return the fastest,” Fennema said.

The four-two transition is expected to trim about $1.5-2 million off expenses, according to Fennema.

Total expenses this year are anticipated to come in at about $81 million. The goal for the next 10 years is for expenses to grow a little less quickly than revenue. By 2031, expenses are predicted to total about $96 million — about $2 million less than the revenue goal for that year.

Expense predictions factored in planned savings due to the four-two credit hour transition, utilization of adjuncts and fellows, and increases in efficiency, but also assumed no further reductions in workforce and increases in salaries and wages.

We’re not going to expect you to do more of what you’re doing with the limited resources you have now.”

The Educational Policy Committee had completed curricular repackaging approvals for 10 of 28 departments as of Sept. 6. The committee has been working on this project since July and hopes to complete it by November of this year.

Some faculty have expressed concerns about increased workloads due to the transition and expansion of non-traditional programs. Being asked to do more with less was a key theme of employee concerns raised on a workplace health assessment administered at Calvin by the Better Christian Workplaces Institute earlier this year.

“We’re not going to expect you to do more of what you’re doing with the limited resources you have now,” Boer said at the town hall. Expansion of the faculty will come when enrollment grows, according to Boer.

According to Elzinga, the university’s next major comprehensive fundraising campaign will include specific attention to the academic division.

Campus development plans include funding for the university’s new Residential Master Plan, which is anticipated to cost about $120 million over the next 10 years, according to the documents. Renovations to the University Center are also planned, as well as new projects in the outdoor athletics complex, and construction of the Learning Commons (formerly referred to as Commons Union) and new School of Health. According to Vice President for Advancement Gregory Elzinga, the university needs to raise about $20 million by summer 2023 to fund the Learning Commons and planned soccer stadium.

According to Fennema, the university will not add to its about $85 million in outstanding debt by borrowing more money unless it’s needed at the end of the 10-year plan to finish projects, and then only if enrollment is climbing. Fennema said some new projects, including the Learning Commons, may also be able to qualify for historical tax credits that the university can sell to outside companies.

Additionally, the plan calls for maximization of the university’s existing physical infrastructure assets by keeping more buildings open year-round and expanding use of event services, with the goal of increasing event services revenue to $5-7 million.

Infrastructure was also a theme of the January 2022 Calvin Tomorrow update, which recommended selling ancillary real estate as part of its shrink-to-grow plan for cutting costs. This summer, the university closed on sales of the Youngsma Center Building and Surge Building, located east of the Beltline and north of the Ecosystem Preserve, for a combined $2.85 million.