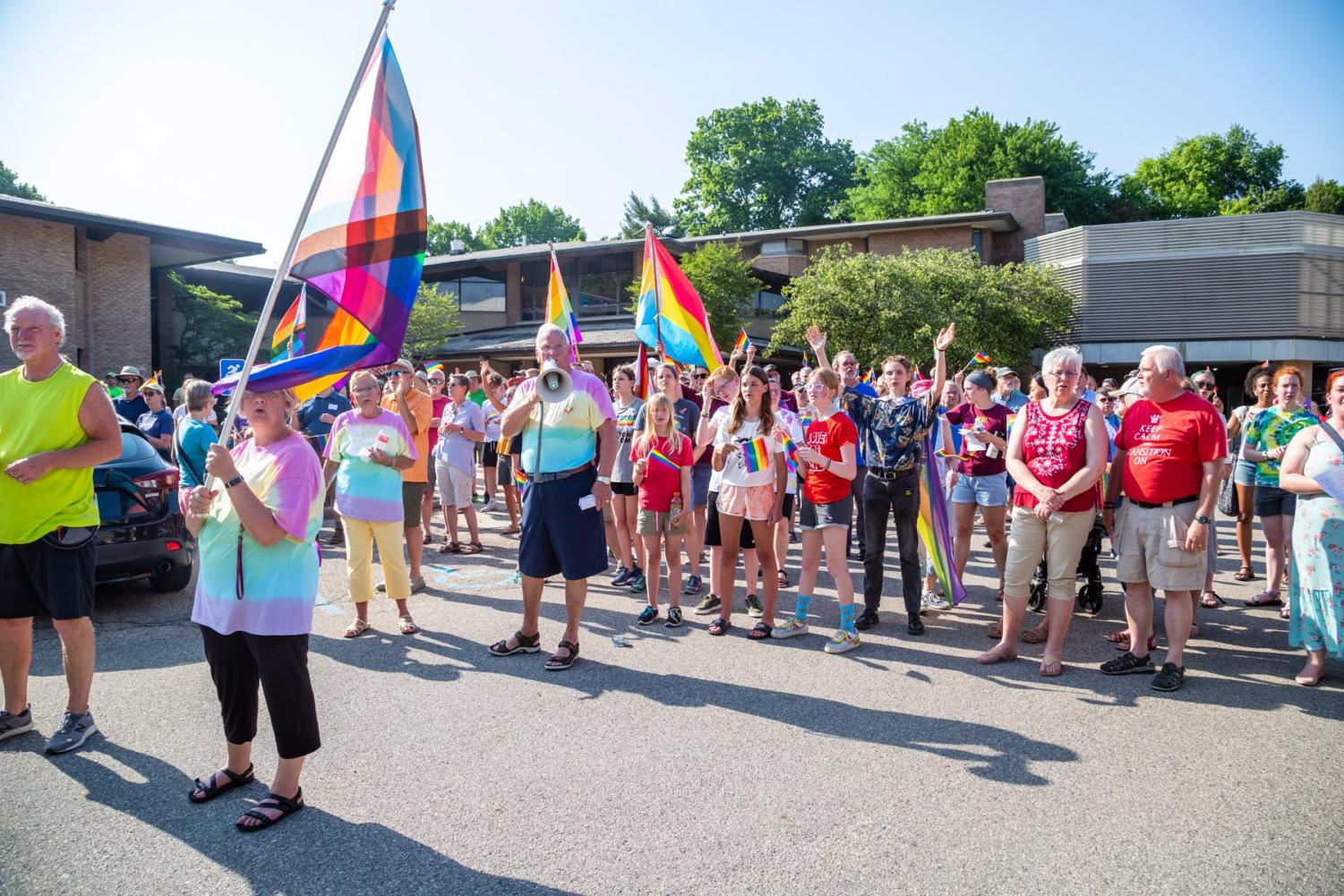 LGBTQ+ rights are a significant area of contention in Calvin’s political dialogue. (Photo by Cheryl Tenbrink)

LGBTQ+ rights are a significant area of contention in Calvin’s political dialogue.

Synod is over, but what will its decisions mean for Calvin?

The Christian Reformed Church in North America’s governing body voted in favor of recommending the Human Sexuality Report to churches and affirmed that an interpretation of the Heidelberg Catechism used to justify the denomination’s stance against “homosexual sex” has confessional status. For decades, that stance has been considered pastoral guidance, a much less firm designation.

During deliberations, Calvin University President Michael Le Roy asked Synod to keep Calvin’s students and faculty in mind. A task force is planned to work through the implications of Synod’s decisions, but the full extent of the consequences for the university may not be known for years. Here’s what’s clear so far.

Synod, the annual gathering of representatives of the CRCNA’s 49 classes (regional clusters of congregations) uses advisory committees to streamline their deliberation on issues. Most committees submit a single report which outlines and defends a set of recommendations for the general assembly to consider. Advisory committee eight, the committee tasked with responding to overtures and communications regarding the HSR, was one of three unable to do so this year, submitting instead both a majority and a minority report.

Seventeen members of committee eight joined the majority report, which advised that Synod recommend the HSR to churches as “a useful summary of biblical teaching regarding human sexuality.” It also recommended Synod affirm that the term “unchastity” in the Heidelberg Catechism answer 108 refers not only to adultery but also to “premarital sex, extra-marital sex, polyamory, pornography and homosexual sex,” granting that position confessional status. Both recommendations ultimately passed.

The majority report argued that committee members had “discern[ed] the need to call the church to radical obedience for chaste living” and cited recommendation D of the HSR, which argues that “this [position] reflects the shared perspectives of the majority of the Christian traditions and denominations historically and globally.”

Five detractors filed a minority report, arguing that “the interpretations of key texts” in the HSR “are not the only or even the most compelling or faithful way to interpret these texts.” The minority report expressed concerns about the HSR’s position on divorce, specifically that it might compel abused spouses to stay in dangerous relationships. It also noted that “the report’s engagement with scientific evidence is insufficient and raises significant questions” – a concern Calvin faculty have also raised — and suggested that there was a lack of representation of the diversity of opinions within the denomination in the report.

Discussion of issues related to the HSR centered on disagreements over what constitutes a reliable scientific source, the composition of the committee that wrote the HSR, historical precedent and varying interpretations of scripture. On all sides, delegates frequently brought up the needs of LGBTQ+ people and the pastors who counsel them. While traditionalist delegates argued that such people need clarification and solidification of the denomination’s stance, delegates who spoke against the HSR suggested that belonging and inclusion were more important, even if it meant the stance remained somewhat ambiguous.

In an effort to clarify the denomination’s position beyond all doubts, the majority report asked Synod to start the process of adding a footnote to question and answer 108 of the Heidelberg Catechism to precisely define unchastity. This measure was not approved by Synod.

A denominational task force is expected to be appointed in the coming weeks to discern the implications of Synod’s decisions for congregations and the denomination’s affiliated institutions, including Calvin. A Calvin-specific task force is also planned. That task force, which is expected to include students, alumni, faculty, staff, administrators and representatives of the denomination, will begin their work after President-Elect Wiebe Boer’s arrival late this month.

According to a June 15 email to faculty from Provost Noah Toly, the task force will be asked to “think alongside the church, reflecting together on the implications of our covenantal ecclesiastical partnership.”

The university has also scheduled a debriefing session for faculty and staff to process the decisions alongside University Pastor Mary Hulst, Synod Parliamentarian and adjunct professor of church polity at Calvin Theological Seminary Kathy Smith, and John Witvliet, director of the Calvin Institute of Christian Worship.

A group of Calvin staff submitted a letter to Calvin’s Director of Human Resources Andrew George and faculty senate on June 13 seeking clarification on the university’s policies for staff concerning sexuality. The letter requested that the sentence “Marriage is understood by the university and the Christian Reformed Church, with which it is affiliated, to be a covenantal union between a man and a woman,” be removed from the staff handbook. “Staff are not considered office bearers of the CRC and do not sign confessional agreements. Therefore, we think allowing variability between the staff and faculty handbook on the issue of marriage makes sense,” the letter stated.

According to the letter, the signees’ goal is “not to change theology or the CRC denomination’s stance but to recognize that good people have differing viewpoints, and biblical interpretations related to sexuality should not be an employment issue at Calvin.”

The letter was signed by more than 140 staff and faculty.

Despite a heat wave, community members, including Calvin students, staff and faculty, gathered outside throughout the day on June 14 as Synod discussed the HSR. They prayed, sang and waved rainbow flags as delegates exited and entered the CFAC.

After the affirmation of confessional status and passing of a motion to instruct Neland Avenue CRC to rescind their appointment of a deacon in a same-sex marriage on June 15, people gathered outside Commons Annex, many dressed in black, to lament the decisions. The gathering was silent and positioned to be clearly visible to delegates leaving the CFAC for dinner. Some delegates joined the gathering, which also included Calvin students, staff and faculty as well as groups from local CRC congregations.

Implications for students and faculty

President Le Roy was present at Synod throughout the HSR deliberations and spoke on behalf of Calvin’s students and faculty.

Le Roy asked the presenting committee to clarify what the affirmation of confessional status would mean for those who have publicly opposed the HSR. A representative of the committee said church order would guide all next steps in the wake of a decision. A delegate later repeated Le Roy’s request and did not receive a response. Le Roy also asked Synod to commit to protecting the academic freedom of Calvin faculty conducting research in the field of gender and sexuality. Advisory committee eight reporter Douglas Fakkema said the HSR encourages such study.

We need to take these discussions and decisions very seriously and remember we are talking about real people, not just an ‘issue’ or a matter of opinion”

In an email to faculty and staff Tuesday, Le Roy, Boer and board of trustees chair Bruce Los said they “remain steadfast in Calvin University’s commitment to be a place of belonging where the love of Christ is central to the ways we live, work, study, and commune together … We seek to be a community where lesbian, gay, bisexual, and transgender persons are treated with respect, justice, grace and understanding.”

Le Roy also expressed concern for Calvin’s LGBTQ+ students in his comments at Synod. “A special and deep concern of ours is for the higher suicide rates [of LGBTQ+ youth],” he said. “We want to draw them closer to Jesus and we want to keep them alive.”

Amanda Stienstra, a counselor at Calvin’s Center for Counseling and Wellness and a graduate of Western Theological Seminary, told Chimes she is “deeply concerned for the overall mental health of our LGBTQ+ community at Calvin in light of the decisions that have been [made] at Synod this week and the current policies, debates and decisions that are being made at Calvin as a whole.”

“Considering that LGBTQ+ youth are already four times as likely to attempt suicide than their peers due to mistreatment and stigmatization, we need to take these discussions and decisions very seriously and remember we are talking about real people, not just an ‘issue’ or a matter of opinion,” Stienstra said.

Several LGBTQ+ students and allies Chimes has spoken with in the last year said they have considered or are in the process of transferring due to the university’s handling of LGBTQ+ matters. Some faculty, who are required to sign a covenant agreeing to keep their teaching, speaking and writing in harmony with the confessions, may also have difficult decisions ahead.

For those who remain at Calvin, conversations about human sexuality will go on. “Our decision-making will not be hasty or abrupt but consultative, collaborative and deliberate,” Le Roy, Boer and Los assured in their letter, adding, “Past synodical decisions with implications for the university (e.g., faith and science, confessional commitment and academic freedom, human origins, abortion) have unfolded over several years.”