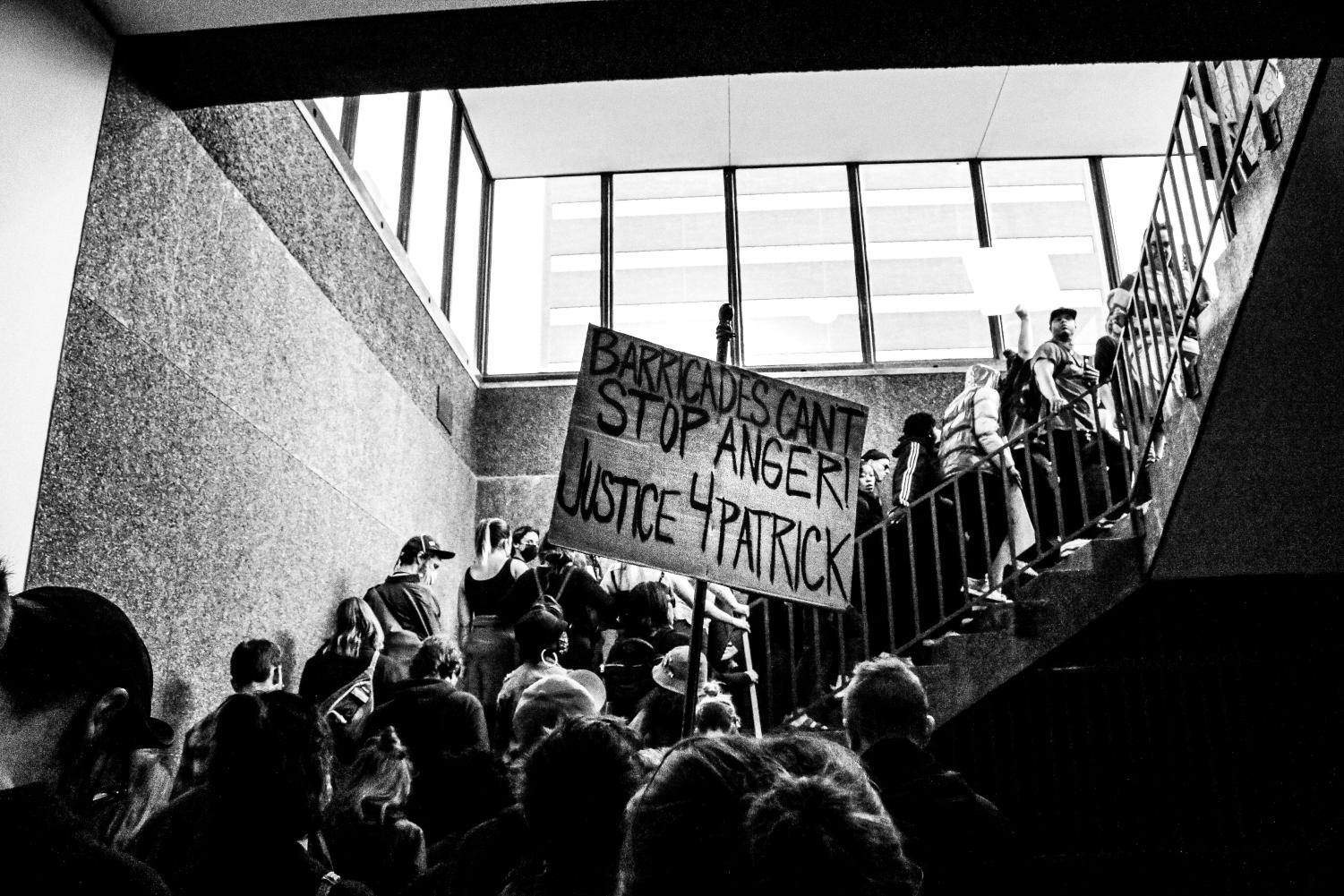 Protestors gathered in downtown Grand Rapids throughout the week.

‘Another day in America’: Calvin community responds to killing of Patrick Lyoya by GRPD

When Calvin senior Oliva Mason first heard about the killing of Patrick Lyoya by a Grand Rapids police officer, a feeling of numbness came over her. It wasn’t until later that she found herself crying, and then “I wished I could stay numb,” she said.

Media attention to police brutality often fades between the killings that make national headlines, but for some Calvin students, like Mason, the feeling of exhaustion doesn’t stop: “That fatigue and frustration layers up, and it isn’t just when someone is killed. When someone makes a seemingly innocent remark [that] implies he deserved to die? The tension adds up. Microaggressions in conversations, feeling like you don’t fit in … this tension is reinforced by smaller pieces of daily life.”

First-year student Simone DeMan told Chimes she also experienced numbness: “As I have been reflecting on the shooting and watching the videos, I have realized how numb I have grown to police shootings. I am neither shocked nor surprised.”

While this shooting may come as a great shock to some, for someone like me, this is another day in America”

And she’s not the only one: “My attitude is not much different from my other BIPOC friends,” DeMan said. “We live in this reality every day; we are always prepared for something like this to happen and are rarely shocked when it does … while this shooting may come as a great shock to some, for someone like me, this is another day in America.”

It was excessive force at a traffic stop that triggered the racial unrest of 1967 in Grand Rapids, in the wake of which more than 100 Black Grand Rapids residents were arrested and no reforms were enacted.

Concerns about the GRPD’s use of force and racial discrimination haven’t been limited to traffic stops, however. In recent years, incidents have piled up, including a 2019 ACLU complaint about the GRPD’s treatment of a Latino teenager, a GRPD officer’s 2020 Facebook posts which seemed to confess to racial profiling, officers’ altercations with crowd members at a parade honoring Breonna Taylor, an incident in a McDonald’s parking lot in 2021 which drew widespread concerns about excessive use of force against an unarmed man and the controversial use of pepper spray and flashbangs at protests. The department has long been criticized for being too quick to draw guns.

What’s in it for a powerful police force to truly just protect us?”

“I’m not sure if there is a way to make the GRPD care about significant change,” Mason told Chimes. “What’s in it for a powerful police force to truly just protect us? If the GRPD isn’t being abolished or seriously defunded anytime soon, how are we going to build trust? Because there is this deep distrust and tension now — and that makes things more dangerous.”

In the wake of the murder of George Floyd in 2020, Grand Rapids increased total funding for the GRPD, despite calls for decreased funding.

Grand Rapids’ city charter mandates that 32% of the city’s general operating fund be allocated to policing — a mandate introduced in what Kuilema described as “the midst of the ‘90s ‘tough on crime’ frenzy” and never repealed. Additionally, Grand Rapids police still have “extraordinarily strong union protections,” according to Kuilema.

The GRPD released videos of the killing of Lyoya on Wednesday, April 13. In response, Calvin President Michael Le Roy released a video statement in which he expressed support for community members “who grieve and mourn” as well as those “who want justice, who seek change, who want a government in our city that is capable of protecting and caring well for all people.”

Prior to Le Roy’s statement, Calvin’s Center for Intercultural Student Development issued a written statement on the killing. “[The CISD] laments the fact that once again there is need to assert the God given dignity and value for a person’s life,” the statement said. “Considering the tragic death of Patrick Lyoya, we want to request prayers for his family and all parties involved. We pray for truth, light and justice.”

The CISD and Campus Ministries both hosted walk-in hours on April 13 offering “a safe place to process, pray, vent or cry,” according to the statement.

Regroup, a monthly gathering to discuss current events and social justice which the Perkins-Grassroots Justice & Equity Learning Community hosts in partnership with the Center for Counseling and Wellness, met on April 14 at the J.M. Perkins Leadership House “to provide a space for students to process issues related to race and race-based trauma,” according to the statement issued by the CISD.

‘Don’t let yourself off the hook’

To Mason, the Calvin community’s track record of responses to injustice against marginalized people is inconsistent. The pain and anger of past hurt lingers for marginalized students, Mason said, especially those with “intersectional identities”: “We are still holding that tension, even when no one else sees it. So when tragedies like Lyoya’s death happen, we are walking onto campus with a brand new layer of tension. The slate is not clean – we are still holding the tension of our unmet needs, even when we give the Calvin community grace for ignoring them.”

Senior Kate DeHaan, who is white, told Chimes she feels the Calvin community has a long way to go in showing support for the communities most in danger of police brutality: “We all need to feel deep shame for our complicity and deep sorrow for the loss of life that was preventable,” DeHaan said.

“Obviously you don’t have to say anything when these things happen, (you may, in fact, be as burnt out and grieving as I am) but if you are willing to offer support, openly recognize or acknowledge the tension fellow students are carrying, that helps,” Mason said. “Don’t let yourself off the hook for showing support – because you never know who is sitting beside you in class tense to the bone because of these events.”