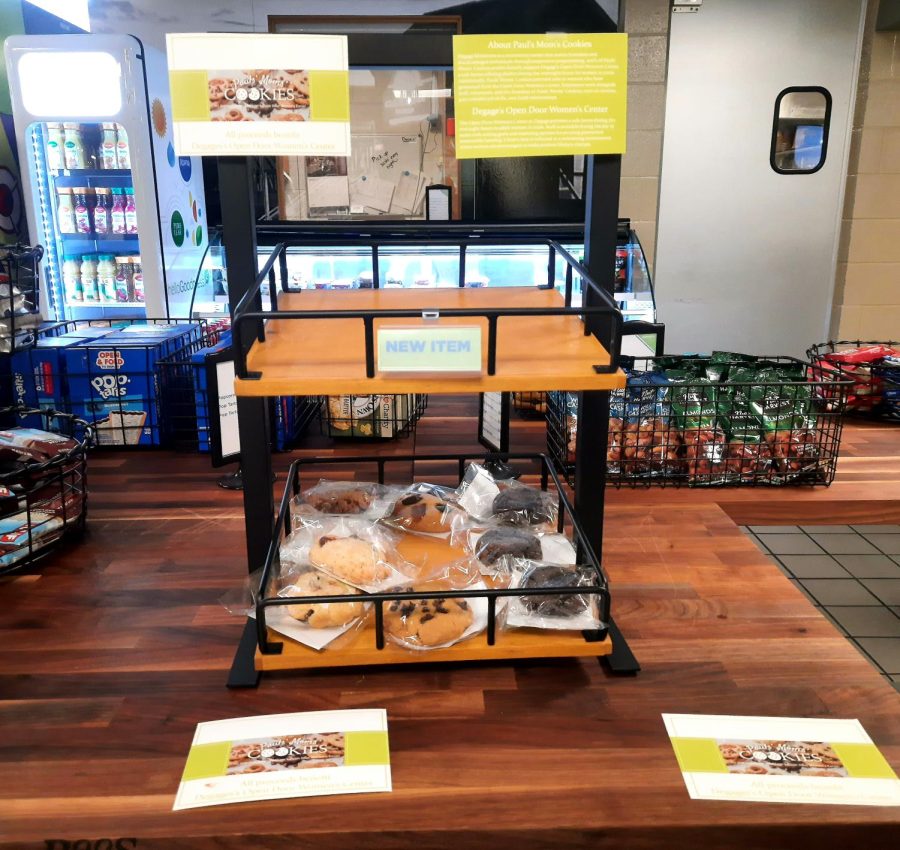 Pauls’ Mom’s Cookies was originally started by two moms. Now it is a branch of Dégagé Ministries that directly helps to fund their women’s center.

Walking into the basement of LaGrave Avenue Christian Reformed Church, the smell of freshly baked cookies fills the room and strengthens the sense of community among the workers. Pauls’ Moms’ Cookies is more than just a company working to make money; they’re working to make a difference through donating all their profits to Dégagé Ministries Open Door Women’s Center. This center gives women who have no other place to stay a second chance to get back on their feet and then offer them employment at Pauls’ Moms’ once they leave. Now, Calvin’s community has the chance to take part in this mission as Johnny’s recently began selling them. This partnership came from junior Abigayle Dayton.

Dayton associates her community-based nursing clinical experience with the smell of freshly baked Pauls’ Mom’s cookies. A nursing major, Dayton served in a low-income community, Heartside, in partnership with Dégagé Ministries last semester as a part of her program. Dégagé is a center that focuses on helping the homeless in Grand Rapids.

“My clinical prof, Professor Schuitema, works closely with Dégagé, so we would go over to the LaGrave’s [church] basement to do different screenings for them, testing blood pressure, blood sugar,” she said in an interview with Chimes. “While we worked, we always smelled the cookies they were baking in the basement next to us.”

One day, Dayton’s class was putting on a foot spa day for women who worked for Dégagé and they told her about Pauls’ Mom’s. Lauren Schuitema, a professor in the nursing department, brought some of these cookies for her students during their post-clinical conferences one day. She remembered the students being impressed with the quality of the baked goods and the company as she expanded on what the women had told them earlier.

“We’re trying to lean more into our so cial responsibilities and support more local diverse-owned businesses, so this fits into our mission”

Pauls’ Moms’ Cookies are a branch of Dégagé Ministries that directly helps to fund the women’s center. Jenna Vermeer, Calvin alum of the class of 2016, is the business coordinator for Pauls’ Moms’. She said the business was originally started by two moms who had a passion for baking and giving back to the community.

“They sold their cookies at farmer’s markets and similar places and gave all their profits to different charities,” Vermeer said.

Around 2016, the business was growing too much for the women so they gave it to Dégagé. The company then began hiring employees out of the women’s center to give them an opportunity for work. Not only that, but 100% of their proceeds began going towards the shelter to continue to provide a safe haven for women.

When Dayton heard about the story, she recognized that this was important work. “[Dayton] asked where these cookies were currently being sold,” Schuitema said. “From that conversation, Abby made it her mission to share this newfound knowledge with Creative Dining Services.”

“I was just a small voice connecting two things that I knew would work well together,” Dayton said. She reached out to the dining services over Christmas break.

Beth Anne Finley, retail manager for Creative Dining Services at Calvin, recalled reading about Pauls’ Moms’ mission and being drawn to how it matched dining services’ goals. “We’re trying to lean more into our social responsibilities and support more local diverse-owned businesses, so this fits into our mission,” Finley said. “Jenna was all about partnering with us and this whole process was the easiest partnership I’ve ever set up.”

By mid-February, Dayton remembers feeling shocked as she scrolled through her phone and saw a story saying there were free samples of Pauls’ Moms’ Cookies in Johnny’s lobby. The free sampling eventually became a permanent addition to the store. “No one told me it was happening!” Dayton said. “I was thankful that Calvin listened to me and took my idea seriously. My advocating made something happen that will last longer when I’m gone and cause something to happen for these women.”

Susan Ryan is one of the women whose lives have been af- fected by Dégagé’s women’s shelter. “I was living in California and got a call from my brother and he was telling me he had stage four cancer, so we decided that I’d come back and spend his end days with him,” she said in a conversation with Chimes. “We got a townhouse in Muskegon. When he passed away, I didn’t think about the bills by myself.” Before Ryan knew it, she was homeless and living in a Muskegon shelter. That was when her niece told her about Dégagé.

“Since I’ve been [here], my life has been turned around and so many doors have been opened. This is home.”

After being homeless for almost three years, she got back on her feet and moved into her new apartment. Now, she works for Pauls’ Moms’ cookies. “I’ve been here for about a year and a half,” she said. “Even if I retire, I’ll probably come back and volunteer, my heart is here for sure.”

Working for Pauls’ Moms’ not only provides women with employment, but also the chance to do what they love and to enjoy their work. “My first love has always been baking and cooking so this is the best job ever. I could not be happier,” said Sandra Wameyo, who had only been working for Paul’s Mom’s for a few months but counted it as some of the best months of her life.

Wameyo lived in the women’s shelter only for a short time. Born and raised in Grand Rapids, she moved to Port Huron when she was in tenth grade and stayed on the east side of the state ever since. “I came back [to Grand Rapids] in September only to visit my sister, but when I got here I instantly knew I was in the right place,” she said. “Since I’ve been [here], my life has been turned around and so many doors have been opened. This is home.”

Currently, the company employs three workers and has volunteers who come in for different shifts during the week, but they have hopes to continue expanding past their 12 locations and to hire more women. Dégagé Ministries is currently under construction and plans to build a kitchen for Pauls’ Moms’ Cookies to move their baking from their basement location, according to Vermeer.

“We’re also planning on having a name change to ‘Open Door Bakery’ this summer,” Vermeer said. Dégagé also plans to open a retail store in September where they will sell cookies, cupcakes and other products. Vermeer said she had been so focused on rebranding and designing the new kitchen that she remembered it being a nice surprise when Calvin reached out to her about the idea for a partnership.

Dayton remains passionate about helping women. She credits Schuitema with being instrumental in the process and encouraging her to continue to advocate for the ministry.

“Carrying Pauls’ Moms’ Cookies in Johnny’s is a very tangible way for Calvin’s community to be God’s agents of renewal in the world,” she said. “Deciding to buy a specific kind of cookie over another kind has that intentionality in mind of where your money is going.”