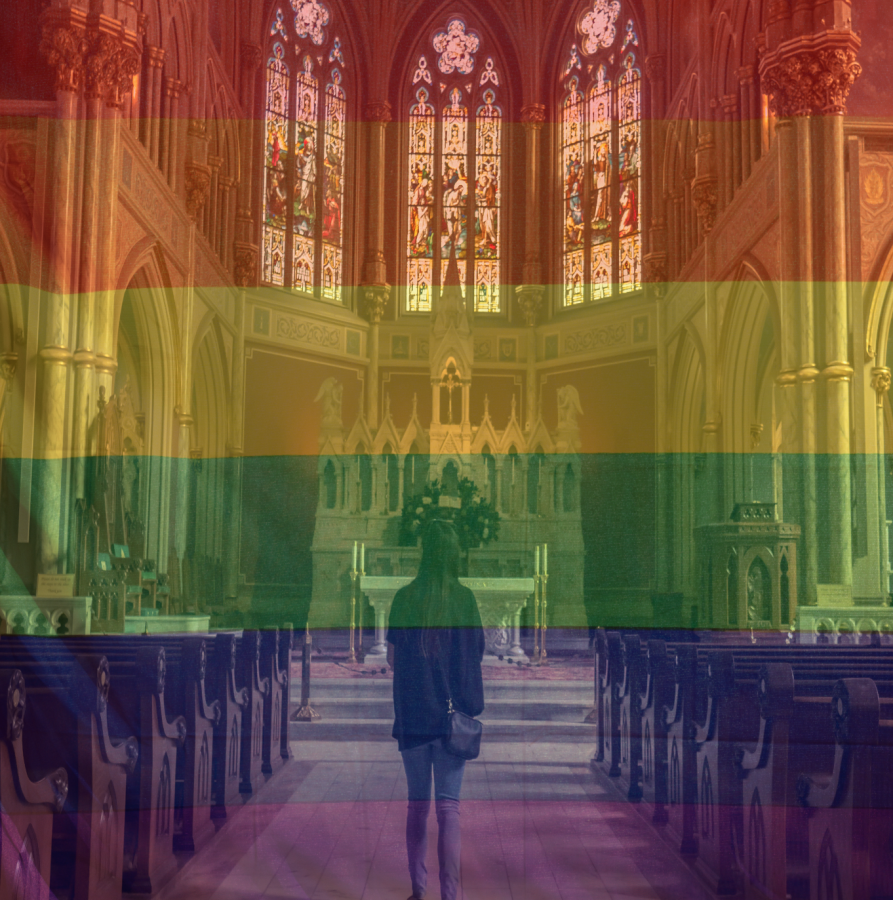 Politics, sexuality, faith – go for a walk around Calvin, and it won’t take long to notice these are divisive issues. On a campus that struggles to avoid branding itself politically, filled with students who often look to do just the opposite, conversations across political divides are a must. At least that’s what university administrators were thinking when they called in the Colossian Forum last summer.

The Colossian Forum, a Grand Rapids-based non-profit focused on Christian conflict transformation, is here to help the Calvin community grapple with the implications of the CRC’s human sexuality report, according to documents shared with facilitators. Political science professor Micah Watson told Chimes he noticed sexuality was an issue “right below the surface for a lot of people” when he came to Calvin: “It was something that students certainly cared about, and faculty, and that people had deep convictions on either side and yet … those tensions rarely surfaced.”

In the last year, those tensions have become more prominent, both on the denominational level, with RCA divisions appearing to be premonitions of what’s to come for the CRC, and on campus, where events like an anti-LGBTQ tabling event have spurred strong, mixed reactions, but are still rarely addressed directly. Calvin’s partnership with the Colossian Forum aims to help bring the issue to light in an intentional, faith-centered conversation.

The Colossian Forum’s programming is designed for churches. Adapting the curriculum for Calvin’s particular situation involved collaboration between Colossian Forum consultants, university staff and administrators, and facilitators-in-training to create a curriculum for seven small-group sessions. According to Vice President Sarah Visser, the goal of the partnership “is for the Calvin University community to grow our capacity to explore issues on which we disagree with depth and rigor, with patience, generosity, wonder, and love.” Faculty and staff training to be small group facilitators were influential in narrowing those “issues on which we disagree” to an intentional focus on sexuality.

According to Watson, at one point in the training sessions it seemed that politics were taking center stage: “It seemed like a lot of it was going that direction and the facilitators said ‘We really thought we were doing sexuality?’ … ‘If we don’t do sexuality then we’re kind of punting what we all thought we were doing,’ and they listened to that.”

Horras, a career coach for business and health sciences, told Chimes that the plan for the sessions now is to “focus on ‘How do we posture ourselves in response to the human sexuality report from the CRC?’” Sessions will also address political divides more broadly.

A total of fourteen faculty and staff members were trained to lead small group sessions, which kicked off at the end of January.

According to University Pastor Mary Hulst, who was among those tasked with adapting the curriculum, one addition was a special session on caring well for students around issues of sexuality. “We want participants to know how we already care for students,” Hulst said, “… and how we can continue to do that with love and integrity, especially around matters of sexuality.”

The facilitators trained in the fall, meeting every other week for 90 minutes to work through the small group curriculum themselves and prepare to co-lead seven small groups. Each small group has eight to 17 members.

Eighty-five employees from across departments and divisions began meeting in late January.

Horras attended an informational session after the announcement of Calvin’s partnership with the Colossian Forum last year and was intrigued by the idea. “I basically knew that it was ‘how to engage in conversations on topics that need to be discussed,’” said Horras. After the session, she accepted an invitation to attend facilitator training.

According to Watson, the training experience was a good opportunity for people on both sides to “hear the hearts” of those with other views. “To sit in a room and do that is scary, but it’s also very good,” Watson said.

“Whatever happens with the decisions at the denominational level, there’s going to be some direction that’s going to make some people happier than others and yet we still will need to figure out how to work well together,” said Watson. His small group met for the first time last week.

Horras’ small group has also met once. “I’m encouraged because in my group I have a wide range of representation [of opinions],” Horras told Chimes. She hopes the variety of faculty and staff participants from across departments will be able to start a “trickle-over effect” of conversation across campus.

According to Watson, one risk of the small groups that has already been identified is the possibility of having a group in which most participants share a view, leaving those who disagree hesitant to speak up. According to Watson, the Colossian Forum told facilitators that “The danger isn’t really that you have blow-ups … the danger is that people don’t share.”

“I think the difficulty that might be is when things are hard or we don’t know how to enter into a conversation we hold back,” Horras said. Facilitator training focused on helping people to get comfortable with jumping into difficult conversations, Horras told Chimes, and she’s hopeful that having opted in to the program means people will come ready to dive in.

Watson said he has gotten the impression that people in his small group are “relieved” to be able — even expected — to talk through differing views on sexuality. “People of each conviction can feel like they’re the ones that get in trouble for saying it,” he told Chimes. According to Watson, people with more traditional views fear being seen as bigoted: “They genuinely can understand how the church has handled this so poorly in the past … even if you think it’s right to hold a traditional position, the way that that can be communicated can cause pain, and they don’t want to do that.”

“I’ve learned that, through my training, that sometimes anger is the back – the root of that is fear. And I think when we are afraid we feel like something we value or love is at stake. And we might not always articulate that well,” Horras said. “We might not express that well, and it comes off hurtful. So I’m hoping that instead of us being quick to jump in with our thoughts or opinions that we would be quick to listen and that we’d hold that space for that sacred listening.”

We’re not going to agree, this is not going to get everyone on the same page — but that we would be more charitable … about where our brothers and sisters are coming from”

“I pray that they grow in grace toward each other, themselves and our students, and that they learn how to communicate well across conflict,” Hulst said of her hopes for participants. “I think their experience will shape our campus to be a place where people can strongly disagree AND love each other. The world is desperate for models of how to do that. Wouldn’t it be great if Calvin can show them how?”

According to Watson, the goal is not to come to a conclusion: “We’re not going to agree, this is not going to get everyone on the same page — but that we would be more charitable … about where our brothers and sisters are coming from.”