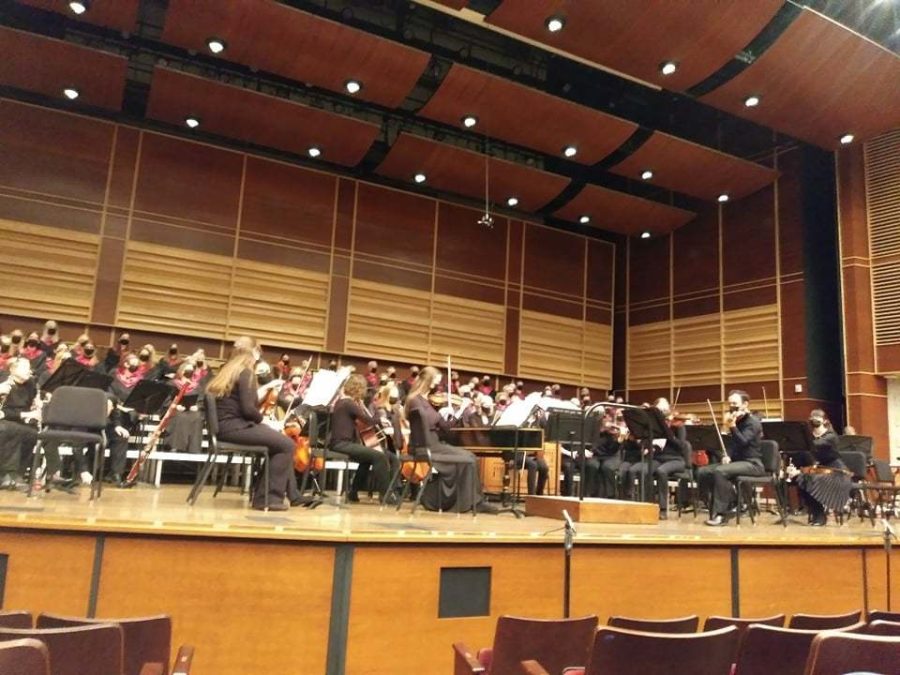 Live performances of the Messiah returned this year for the Oratorio Society’s 102nd season.

For over 100 years, the Calvin Oratorio Society has heralded the arrival of the Christmas season with performances of Handel’s Messiah. In 2020, a group of Calvin faculty, staff and students joined Calvin Orchestra and Campus Choir for one day to put an ensemble together. They performed a trimmed 40-minute version, filmed by Calvin’s Tech Crew and later streamed on Youtube.

This year, the Society resurrected live performances of the Messiah on Friday, Dec. 3 and Saturday, Dec. 4 in the CFAC. For those who couldn’t sit through the traditional version, this year’s performance offered a new twist: the highlights of the three-hour tour de force in just an hour and a half. The performances still featured a full choir and orchestra as well as soloists.

“For us, it’s a year of rebuilding,” the Society wrote in their 2021 season announcement, “it’s a live performance during a global pandemic, it’s an effort to be safe while honoring a long-standing Calvin tradition.”

The choir and orchestra came together for the first time on Tuesday evening, and their first rehearsal with the four professional soloists was Thursday evening, just a day before the first performance.”

The performances featured an abridged version of the Messiah, highlighting the most familiar movements in a 90-minute performance — about half the usual runtime. New this year, too, was a Saturday matinee performance designed to be more accessible for demographics who prefer not to be out late.

Music professor Pearl Shangkuan, who is also Calvin’s director of choral activities, is serving as interim music director this year. She previously served in that role in the 1998–2003 seasons — the first, and still only, female director.

The choir and orchestra came together for the first time on Tuesday evening, and their first rehearsal with the four professional soloists was Thursday evening, just a day before the first performance.

More than a Performance

For many, the Messiah experience is more than just a performance. “They don’t just sing it as a piece of beautiful music, you can see the heart and soul in the music … They believe what they’re singing. They treat the concert as a form of worship,” Shangkuan said. The same is true for the audience: “People who come are spiritually nourished by this work.”

For many, the annual performance is also a family tradition: three generations of Schenkel’s family will be performing together this year. “Ever since I was born, the Messiah has been well known in my family. My mom always talked about the day we would sing together in the Messiah performance at Calvin, so it’s surreal that it is finally coming true,” Schenkel told Chimes. “My grandmother sang with her mom, my mom sang with her mom, and now I have the beautiful opportunity to sing with my mom and grandma.” According to Shangkuan, this isn’t unusual; the performances are a “family affair” for many.

The choir brings together students, staff, faculty, alumni and other community members. Chemistry professor Douglas Vander Griend has been involved on and off since his first year at Calvin as a student. Now a faculty member, he continues to value the experience of performing in the Messiah. “The chance to worship God with such a committed and polished group makes the performances so life-giving,” Vander Griend told Chimes.

Although COVID restrictions are looser than last year, obstacles remained for live performances, including the need to sing in masks and require that community members be fully vaccinated to join the choir. Shangkuan told Chimes this was done due to the risks of transmission during choral singing; requiring full vaccination status allowed the group to ease some contact tracing and quarantine protocols. Students involved were not required to be fully vaccinated, due to Calvin’s existing weekly-testing option for unvaccinated students.

The requirement brought the group size down some. This year the performances featured a choir of 80, less than many past years but, according to Shangkuan, actually closer to the number that a performance in Handel’s era might have used.

“Obviously singing in masks is less than ideal, but I am so grateful that people are willing to make small personal sacrifices so that we can protect each other,” Vander Griend said.