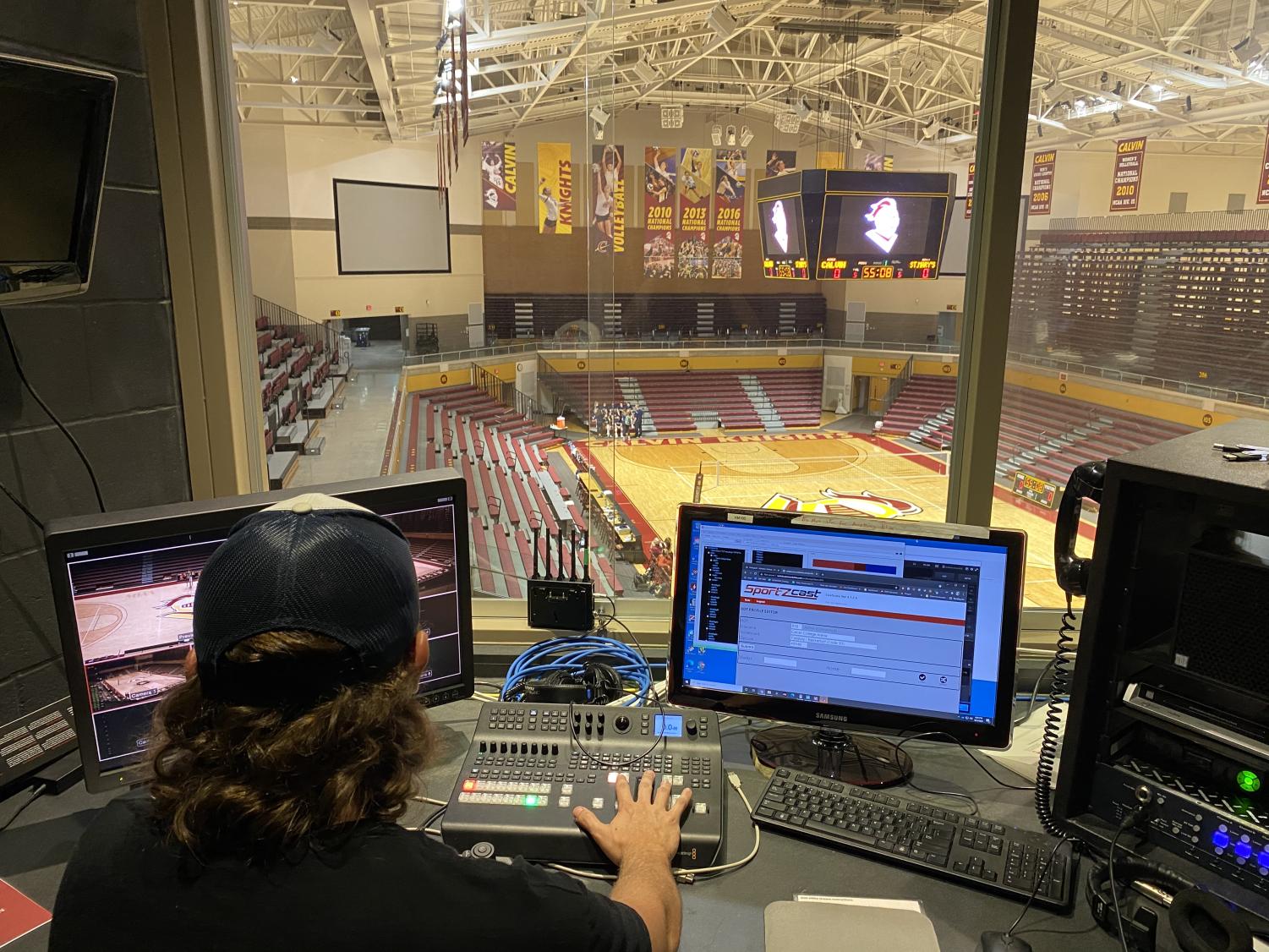 Calvin junior Joe Hayduk looks out over Van Noord Arena from the tech booth before a volleyball game.

It’s an October day at Zuidema Field, and the Calvin soccer team is competing in a midseason matchup. A sizable crowd takes in the action from the stands, but across campus, someone else is watching — and making the viewing experience possible for hundreds more across the globe.

Over the last year and a half, demand for streaming of events has increased due to caps on in-person attendance and other COVID-related restrictions; the Calvin Video Productions team has been there to meet that demand, gaining career experience while they’re at it. And with the incorporation of new technology, possibilities are only growing.

A group of seven Calvin students, along with video producer Nate Porter, is responsible for streaming the vast majority of Calvin’s sports events on campus. For events that take place at Zuidema Field, including soccer and lacrosse matches, a single student worker typically manages the video feed that Calvin streams from its online platforms. The video comes from a fixed, weather-sealed camera next to the press box overlooking the field that can be controlled by the student, who’s seated in the control room in the basement of Hiemenga Hall. From the control room, the student can use a joystick to make the camera follow the game action. A similar setup is located in the upper reaches of Van Noord Arena, where a tech booth overlooks the court.

On a game day, a student who’s signed up to stream an event typically arrives at the control room or tech booth an hour before the game is set to start. The student’s first task is to select the camera view they’ll use for the game and check the scoreboard and camera controls to ensure everything is operating smoothly. During the game, they’ll control camera angles while listening to audio from play-by-play commentary from the field’s press box as well as an atmospheric microphone that picks up shouts of players and cheers from the crowds. The audio and video are wrapped together and sent out in a video feed that reaches homes across the world.

There are a number of things to manage, but not too much. “We need it to be simple enough that we can have one person operate it, and easy enough for students to be trained and learn how to do it [each year],” said Porter, who trains and manages student workers. It’s a balance between creating a high-quality product while keeping the process from becoming too complex, which could lead to abundant opportunities for things to go wrong.

It’s a process that multiple Calvin student workers learn every year, with students of all years becoming members of Porter’s team. Students pick up shifts throughout the week streaming sports matches and other live events that happen on campus. Porter typically hires one to two new student workers each year to maintain a staff that’s big enough to cover any event that might happen on campus, but small enough to provide each worker with enough work hours.

Most of Porter’s team members come from Calvin’s communication arts and sciences program, adding some hands-on experience to their classroom education.

“They can … have this experience of, ‘I worked in video production for my college as I was going through it, so I can put that on my résumé so I’m more likely to be hired for another gig because I’ve had this experience,’” Porter said.

Joe Hayduk, a junior double major in film production and marketing, said that working for Calvin Video Productions has paved the way for high performance in the classroom and beyond.

“Our job moves at such a faster pace, and there’s always something interesting and unique happening, so I’ve learned a lot of things before doing it in class, and it just makes me better in my classes and improves my class performance,” Hayduk said, adding that most student workers encounter technology and skills on the job before learning about it in class.

Aside from helping him in the classroom, Hayduk’s work experience has provided him with skills that he knows will be valuable in a job post-graduation.

“What we’re using equipment-wise is what other news channels and sportcasts are using,” Hayduk said, noting that he’s recognized the equipment being used in behind-the-scenes shots of several non-Calvin-affiliated broadcasting companies.

Porter is seeking to expand that real-world experience for Calvin students who aren’t employed by Calvin Video Productions. For the communications 222 class that he’s teaching this semester, Porter is offering opportunities for students in the class to participate in the video and audio production process at events. It’s a solution that gives students the opportunity to gain practical experience while expanding the possibilities for live productions by increasing the number of people staffing events.

“I’m gonna teach them how this kind of stuff works, how this infrastructure works and have them be doing a couple of games or other events that are happening, so we can kind of integrate the needs of the college with the needs of the students trying to learn how to do some of these types of things, and kind of blend these two areas,” Porter said.

More students pitching in to help may broaden Calvin’s horizons as it explores more streaming possibilities. CVP is in the midst of a transition from an old technology system to a new one that may reorder how live events are streamed. The old system relies on physical wires that run from each individual camera to the control room, from which events are streamed. One such wire runs all the way from Prince Conference Center to the control room in Hiemenga. Under the new system, physical wires are still necessary, but streaming can be controlled from any space on Calvin’s network, meaning that workers might not have to be in the control room to stream events.

Coordinating the technology transition, which requires replacing all cameras on campus, hasn’t been easy. For cameras like the one at Zuidema Field, Porter must find a time when staff are free to swap the new camera in for the old sometime when teams won’t be competing, and hope for good weather to top it off. It’s a big challenge, but one that Porter hopes will prove worth it in the long run.

Porter also hopes that help from his communication students will allow Calvin to create a viewing experience with more variety for events at Van Noord Arena. An anonymous donor recently gave money for Calvin to purchase a Ronin gimbal, which can be used for getting action shots down on the floor during games. Fitted so that it can be worn like a backpack, the Ronin holds the camera in place while the user directs the shot. Motors on each axis move as the user moves, stabilizing the camera to create a smooth viewing experience. During games, a student might wear the Ronin to capture footage while another student in the tech booth chooses which camera angles go on the stream.

Sports events aren’t the only thing that CVP covers. Porter’s team provides the livestreams for everything from chapel services to on-campus lectures to concerts to the January Series, while filming video segments for marketing materials and Calvin LifeWork as well.

Hayduk noted that there’s a marked difference between streaming sports and other live events, however. “I’ve been able to do homework during certain events, just ‘cause it’s just one speaker … the camera’s locked on them and you’re not doing much,” he said. “But then there’s been times [with sports] where I just blink for a second and all of a sudden you’ve lost track of the ball.”

While many recordings of other events are saved to Calvin’s website, this is rarely the case for sports. Instead, recordings of matches are streamed, downloaded and saved to a Google Drive folder for Calvin coaches to analyze with their teams, without being publicly available to any opponents looking to scout them.

The show must go on

As the world adjusted to social distancing last year, event streaming suddenly became more important than ever before. Viewership skyrocketed as fans were no longer allowed in stadiums — and along with the viewers came the complaints. At the beginning of the pandemic, fans were grateful to just have some way of watching events, but expectations changed as time went on and viewers began to compare Calvin’s services to other broadcasts.

At the same time, the demand for livestreaming capabilities increased as social distancing guidelines went into effect and event planners realized that they could reach a larger audience that wasn’t geographically-bound if they made events available to watch online.

Through all these changes in the world outside, the process for streaming most events remained the same: one student alone in a control room running the show. As sports seasons come and go, Porter hopes that CVP can continue to provide a consistent and quality way for Calvin fans to watch games from a distance, and he’s quite content if most viewers never think about the work that goes on behind the scenes.

“I don’t want people to realize what goes on,” Porter said. “They just kind of like watch the stream, and they’re like, ‘This is great.’ They don’t think about it that we did our job.”