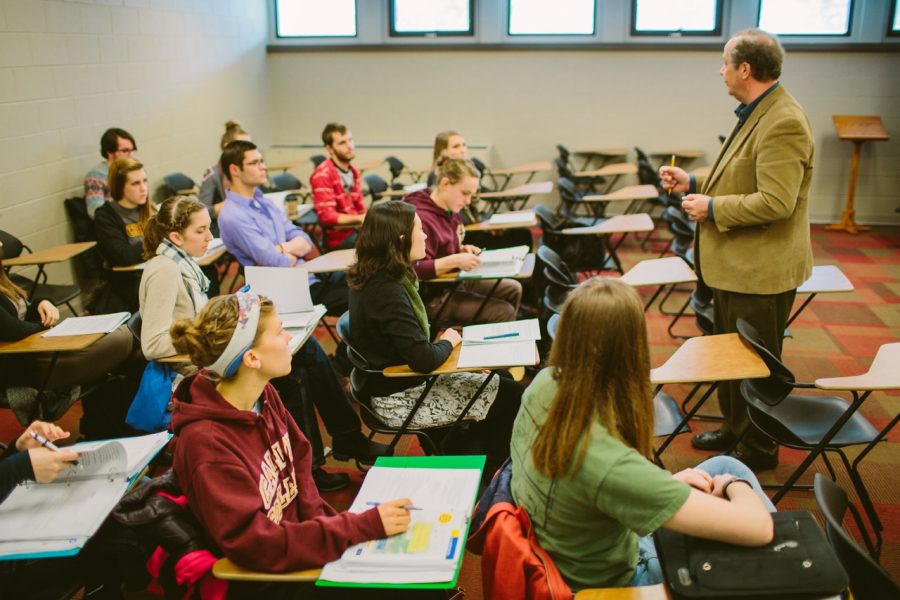 All Calvin students must take at least one religion class to graduate, but only 27.1 percent of these students are CRC. The information divide between students and CRC theology is large, but, according to students, it is not affecting their experiences in class.

Emma Delfin, a sophomore studying speech pathology and audiology, attended a Catholic church in elementary school. Then, for middle school through high school she attended a non-denominational church. Although she has a religiously diverse background, she didn’t know much about the CRC before coming to Calvin.

Delfin is taking religion 121, “Bible Literature and Theology,” with Professor Daniel Harlow. “I knew it was going to be different [from] the Bible classes I had had before, which were more devotional style. I was worried and felt underprepared because I didn’t know much about CRC-specific doctrine,” Delfin said.

Joshua Kim, senior philosophy and religion major, also had a few doubts heading into his first religion class. Kim was raised Presbyterian, and his father is a pastor.

“I didn’t feel prepared, but you just get used to it over time,” Kim said.

“I chose [the class] because I was super nervous for my first religion class at Calvin and another friend who had Professor Harlow said it went well,” Delfin told Chimes. Although the homework in the class tends to be long and rigorous, according to Delfin, she enjoyed learning about the Bible in its cultural context.

Zachary Rozendal, a sophomore studying mechanical engineering who is also taking a religion class for core, grew up in the CRC. He is also in REL 121 and learned about it from friends. Unlike Delfin and Kim, Rozendal felt “prepared, since [he] grew up learning this [his] whole life.”

Jesse McCurdy, a sophomore, had a bit of a different experience. Initially entering Calvin only as a biochemistry major on the pre-med track, McCurdy had no intentions of adding another major. However, after his first theology class, honors 102, McCurdy decided to add a religion major.

“I absolutely fell in love with the idea of studying religion,” McCurdy said. “I not only grew intellectually in my faith but also in a more personal connection to God.”

McCurdy grew up in a Church of God household. Calvin encourages CRC tradition, but never has it felt coerced, McCurdy said.

According to Rozendal, Harlow’s class explores multiple perspectives — not just the CRC.

“My favorite part is learning about the stories from different perspectives that I have not thought about before,” Rozendal said.

Similar to McCurdy, Kim has not felt coerced into the CRC. Kim wants to be a pastor one day, most likely for another denomination. His desire has not been squelched at Calvin.

“I don’t think I ever felt like I was indoctrinated, like I had to think this way,” stated Kim.

Soon enough, however, he began to see his religion classes as opportunities.

“It’s an opportunity to actually learn more about your faith and dive deeper in what you believe and why you believe it,” Kim said.

“I would say I did feel prepared for the foundation of religion classes at Calvin, growing up [in] a Christian household and school up to middle school,” said McCurdy. Nevertheless, he said he felt challenged in the course.

“My best advice would be to approach the religion classes at Calvin with an open mind,” McCurdy said.

“I make clear to nonreligious students or students of other faiths that my courses aren’t catechism classes and are not meant to proselytize or convert them to Christianity in general or the Reformed tradition in particular,” Harlow said in an email to Chimes. “I tell my students that the biblical studies courses I teach do not presume any prior knowledge of the Bible or theology. They can learn from, benefit from, and excel in our Bible and theology courses even if they come into them with little or no prior knowledge of the Bible or Christian theology.”

Harlow said he can relate to many students, as he also did not grow up in the CRC.

“I do like to share with my students that I grew up as a Pentecostal but that I left that tradition and aligned with the Reformed tradition when I went to seminary and graduate school. I think my sharing that may put some of our non-CRC students at ease. Anyway, I hope it does,” Harlow said.

“I like it a lot more than I thought and it’s not as overwhelming as I had expected,” Delfin said. “To anyone else who feels intimidated coming into a Calvin religion class, especially without a CRC background, I would say that talking to my friends about their experiences with certain classes and professors really helped me to feel better and find a class that I could get some enjoyment out of.”