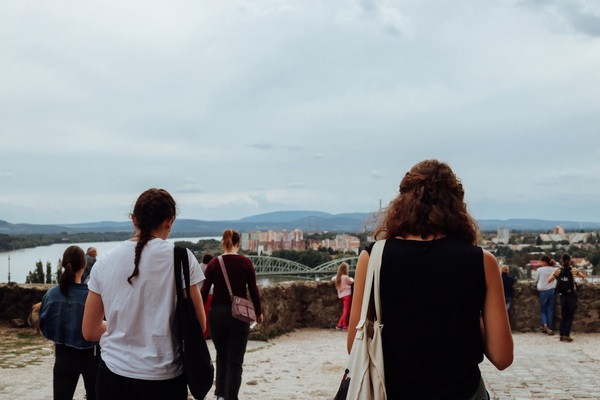 Calvin students look out toward the border with Slovakia from the roof of the Basilica of Esztergom in northern Hungary.

Calvin students are studying abroad this semester for the first time since early spring 2020, when the Great Britain, Ghana and Spain groups returned to the United States due to the pandemic. Thirteen students are living in Budapest, Hungary this semester and studying at two local universities, Karoli Gaspar Reformed University and Corvinus University of Budapest. They are also studying with Calvin professor Peggy Goetz of the department of speech pathology and audiology.

Hungary is the only abroad program running this semester. “In a normal year, there would have been more programs,” Off-Campus Programs Director Cynthia Slagter told Chimes. “We were hesitant to start up everything and I’m very glad we didn’t.”

Students in Hungary this semester faced a few obstacles unique to studying abroad during a pandemic. Embassies around the world have been slowed as a result of COVID and are behind on processing things like visas, which the students needed to stay in Budapest for the semester. Students in the program didn’t receive their visas until they were in Hungary. According to AlisVan Baren, a Hudsonville native who is currently in Budapest, some students had trouble boarding their planes in the U.S. because they weren’t able to present visas. Slagter told Chimes that acquiring visas may be a struggle for the spring abroad programs as well.

They initially expected to be required to quarantine, according to both Slagter and Van Baren but ultimately did not have to thanks to their vaccination status.

Despite being fully vaccinated, students in Hungary also had to go through a lengthy process to get a European Union-issued digital vaccine card in order to travel and study.

“To travel freely in the EU, you need a digital vaccine card issued by the EU itself, so the ones we all had to get in the states don’t cut it,” Jack Rogers, a junior abroad this semester, told Chimes. “While it’s possible to get these vaccine cards, it’s a time consuming process with lots of stages.”

Regarding COVID restrictions in Hungary, Rogers said: “There are very few … Every now and again, some places want to see some verification that you’ve received the vaccine before entering. Outside of that there isn’t anywhere that requires masks except for one or two classes. Everyone keeps a mask on them, but you don’t need to wear it all the time.” Although Hungary’s vaccination rate is similar to the U.S.’, Hungary has not experienced as drastic of a spike as the U.S. has recently. The Hungary program students were sent with a supply of COVID tests, provided by the Student Life office.

Studying abroad is probably the very best way of decentering yourself from ethnocentrism, egocentrism, and really suddenly realizing the things around you … It helps us realize we’re part of a world community.”

Van Baren is a speech pathology and audiology major who says she was set on going abroad while in college but didn’t necessarily expect that experience to take place in Hungary, which fit into her packed SPAUD-class schedule better than other options.

According to Van Baren, most students on the trip were hesitant to plan much for things like weekend trips to other European destinations, worried that their semester abroad wouldn’t happen at all: “None of us really set ourselves up for this, we didn’t want to end up really disappointed if we couldn’t go.”

But those fears were not realized, and Van Baren and the 12 other Calvin students are now almost a month into experiencing Budapest first-hand.

Meanwhile, the office of Off-Campus Programs has been hard at work keeping up with COVID requirements around the globe. In preparation for the spring re-launch of study-abroad programs in Spain, Honduras and Great Britain, they have been “constantly in contact” with host countries and universities, according to Slagter.

“Studying abroad is probably the very best way of decentering yourself from ethnocentrism, egocentrism, and really suddenly realizing the things around you,” Slager said of the importance of these programs. “… It helps us realize we’re part of a world community.”

Slagter encouraged students who don’t have full semesters to dedicate to an abroad experience to consider summer or May-term programs. “Don’t think you can’t study abroad,” she said.