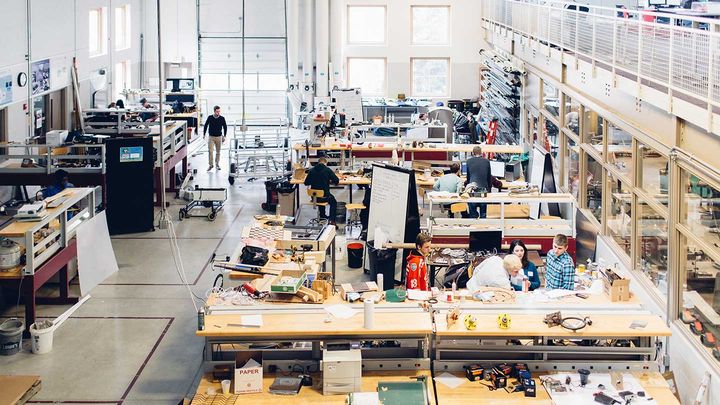 Unlike other years, the engineering department is partnering with a “client” that is not on campus: Habitat for Humanity.

Over the last 19 years, Professor Matthew Heun has been teaching engineering 333, “Thermal Systems Design.” The class has worked with various on-campus departments to gain practical engineering experience in building sustainable and efficient thermal systems. This year, however, as a result of a partnership between Heun and Habitat for Humanity, students are getting real-world experience in a class structured as an engineering firm to study Habitat for Humanity’s newly built low-carbon house.

Every fall, Heun finds a new project for his thermal systems design class to tackle. The class is structured to teach mechanical engineering students how thermal systems function and are designed. At the same time (in “parallel tracks,” as Heun calls it) the students assume the roles of engineers in a professional setting, replete with deadlines, product presentations, status reports and a “client” the class answers to. Usually, this client takes the form of various departments within the university. This year, it is the Kent County division of Christian nonprofit Habitat for Humanity.

Over the summer of 2021, HFH Kent built a low-carbon house, dubbed the “carbon footprint build.” Mark Ogland-Hand, who had worked with Calvin and Heun on a thermal design poster project a few years ago, reached out to Heun in the summer.

“Mark emailed me out of the blue to see if we would have some students available to give a poster at the celebration event for their low carbon housing project,” Heun said. But the professor said no. “I’ve never repeated a project … It’s been a different thing every year for 20 years,” he explained in a conversation with Chimes.

He wasn’t closed to the idea of a partnership, though. “I thought, ‘Oh, that’s kind of interesting. I wonder if [HFH Kent] has somebody doing the analysis to see how much carbon they’re saving with their low-carbon house build.’” Heun saw an opportunity for his thermal systems design class to move outside Calvin’s sphere. “Maybe my students could do that … [they] could learn something about the construction process, they could learn a lot about energy, we can do energy modeling on the house,” he said. He pitched the idea to a receptive Ogland-Hand, and the partnership began.

Thermal systems design is split into two sections. Both analyze and interact with the design of the “carbon footprint build” (known by students as the “London house,” named after its street) while also studying the structure of standard HFH homes.

Each section analyzes one standard house: Section A looks at the “Stolpe house” and Section B studies the “Woolsey house,” both named for their street locations.

Senior and Section A member Adam Tjoelker referred to this as “parallel processing,” meaning that two sections are looking at all aspects of the construction of one of two “control” homes and putting it side by side with the cost and efficiency of the London house. Each class emulates an engineering firm and separates students into four groups.

Senior and Section B member Baylee GalanBrowne told Chimes that each group looks at disparate aspects of carbon emissions through the lifetime of a house. These groups include a design team, an embodied carbon group, an onsite energy group and a utilities group. This structure represents how a real engineering firm would operate when working on a similar task.

Heun said that modelling the class on real firms helps students work together to achieve the common goal of serving the customer’s needs.“The benefit of having a … customer of the project [is that it] helps to guide the students as they’re doing their analysis and design work,” Heun said.

Despite the safety net of not having a career on the line, students feel the pressure to go above and beyond class requirements. “It’s a lot, but I think it’s a lot in a good way,” GaylanBrowne said. “I think that it’s teaching life skills that we’re going to need in our engineering firms later on after graduation.”

Senior and Section A member Cameron Snoeyink has struggled with the logistics of the class and how the work is divided among groups.“The challenge for me in this class has been its organization, figuring out how each group works together. That’s a really hard thing to do, but necessary in all careers,” Snoeyink said. Heun said this pressure is always present in class, yet has become more significant with this new client.

Thermal systems design has been utilizing a real-world engineering firm structure and accountability to a customer for all of the 20 years that Heun has taught the class.

“In my experience, the students are always interested in and excited by an external customer being in the classroom,” Heun said. However, he says this particular customer has moved the class beyond its normal interest in the project. “I think the level of engagement is higher this year, with a customer who is somebody not from Calvin’s campus. Also, because Habitat for Humanity’s mission is so resonant with our Christian commitments and with the idea that we Christians should be aware of pain and poverty and try to solve it.”

Snoeyink wasn’t aware of the partnership between Calvin and HFH until the first class, but he was enthusiastic when he learned about the project. “I was excited to work with them. I think they’re a really cool organization. Mark, the [HFH] liaison seems to be really excited about what we’re doing and about figuring out how to reduce the carbon output of the house.”

More than anything, Heun sees the way students are excited to contribute to an organization like HFH. “There have been a few times in [the biweekly status report meetings] where Mark Ogland-Hand will say, ‘Oh, we’ve never thought about that before,’ or ‘Oh, we’re interested in that.’ And that is exciting for the students, because they think, ‘Okay, we’re providing some real value here, they haven’t thought of that yet. So, let’s dig into it and figure it out.’”

Although Heun has taught and currently teaches many other classes, he says that ENGR 333 will always be one of his favorites. “The students are learning so much,” he said. “And I’m not teaching them. They’re teaching themselves.”