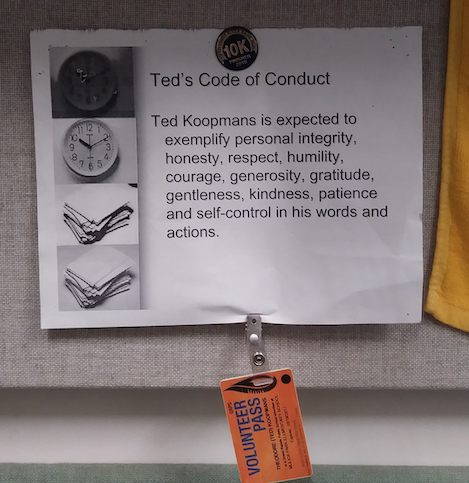 Ted Koopmans, Calvin’s former head of building services, displayed a code of conduct in his office.

Over his desk in the basement of DeVos Communication Center, Ted Koopmans kept a copy of his personal code of conduct. “Ted Koopmans is expected to exemplify personal integrity, honesty, respect, humility, courage, generosity, gratitude, gentleness, kindness, patience, and self-control in his words and actions,” it read.

He was the supervisor of the university’s building services until last month.

University President Michael Le Roy announced on June 7 that Calvin’s in-house facilities management staff would be replaced by contract labor no later than June 27. The staff and faculty-wide announcement came while facilities employees were still in a meeting informing them of the changes. Employees were given less than 48 hours to consider job offers from the incoming contractor.

“[Koopmans] has wholeheartedly committed every single one of nearly 15,000 days to the people of Calvin. He has gone above and beyond in his work (often without recognition), challenged colleagues and students to think deeply, and has been a true agent of renewal in your square inch of the world. Ted Koopmans is what Calvin should be,” his daughter, Jenny Van Wienen, wrote in a letter to Le Roy.

Along with Jack Phillips, head of mechanical maintenance, and a number of other facilities staff, Koopmans has chosen to leave his position at Calvin rather than transition to working for National Management Resources Corporation, the company Calvin’s facilities services will be contracted through. NMRC is based in Lagrange, Georgia and specializes in facilities management for private schools.

In his June 7 announcement, Le Roy stated that NMRC “will maintain or enhance the level of service we now are able to provide on campus” and “every current Calvin employee will have an opportunity to continue to work at Calvin and receive a benefits package that includes a competitive salary, respects seniority, and offers comparable benefits including healthcare, vacation, and retirement.”

Koopmans and Phillips disagreed, saying that neither the level of service nor the benefits will be comparable under NMRC. “I’m very skeptical of the success that Calvin’s going to have due to these decisions,” Phillips said. Under NMRC, Phillips believes staff will have less motivation and freedom to provide cost-saving repairs to Calvin equipment.

An FAQ document provided to Chimes by facilities director Russell Bray stated that the partnership with National is intended to “honor and keep our facilities employees.” Calvin will continue to directly employ Bray, as well as an assistant facilities director and an environmental health and safety officer. Bray did not respond to a request from Chimes staff for additional comments.

“The remaining 50 positions will transition and become employees of National working at Calvin University,” the FAQ explains. According to Phillips and Koopmans, however, many of those 50 won’t transition.

Todd Hubers, vice president of people, strategy and technology, said that about half of current facilities staff will make the transition.

Members of the facilities department gathered for a mandatory meeting on the afternoon of June 7, where they were told NMRC would be replacing their jobs.

There was no way in hell…you could have paid me fifty an hour more and I wouldn’t have done that. I’m not for sale.”

The next morning, there was a meeting with NMRC where facilities staff were to pick up paperwork for the transition. That paperwork was due Wednesday morning, leaving employees with less than 48 hours to make important career decisions. “We tried to address the short implementation time by offering every employee a position at the same salary,” President Michael Le Roy told Chimes, “We tried to eliminate any obstacles that would require a rushed decision.”

Phillips told Chimes he never picked up the paperwork. For Koopmans, likewise, working for NMRC was not an option. “There was no way in hell…you could have paid me fifty an hour more and I wouldn’t have done that. I’m not for sale,” Koopmans said.

The week that followed was an emotional one for facilities staff. “The next day grown men were crying because of the pain they felt,” Koopmans said, “not only for themselves but for each other…and for Calvin.”

Facilities staff that do make the transition to NMRC will still be eligible for the K-12 tuition grant and the Calvin Dependent Tuition Waiver, which help children of Calvin staff attend Christian primary and secondary schools as well as Calvin. Calvin will also retain responsibility for any additional healthcare premium costs resulting from switching from Calvin benefit plans to an NMRC plan for a period of 12 months after the transition.

Those who don’t transition won’t receive any aid. According to Phillips: “We’ve had to downsize or terminate in the past…they got severance, they got help; we got nothing.”

In addition to the loss of full time employees who aren’t transitioning to National, the university will no longer hire student facilities employees, and existing positions will be eliminated at the end of August, though other on-campus work opportunities remain.

“I’m committed to working with colleagues to find ways to ensure there are pathways to student employment that will support those who depend upon these opportunities the most,” Vice President of Student Life Sarah Visser told Chimes. “We all benefit from the excellence that students bring to their on-campus employment.”

A recent third-party assessment by Sightlines reported that Calvin’s physical plant was the best they had assessed, despite having the fewest people and the lowest budget, Koopmans told Chimes.

However, Le Roy’s email said the transition to NMRC was made to save money.

“In looking forward, it will be increasingly difficult to provide excellent service while continuing to reduce costs, so we needed to look at a longer-term solution for managing our facilities operations…” the email said, “Through this partnership [with NMRC], we will reduce and control facility costs for the next five years.”

The FAQ adds “National has the depth of resources and expertise to advise and support us…National can realize cost savings on equipment, supplies, insurance, maintenance management software, etc., at a level that we alone simply cannot.”

Koopmans and Phillips were less than convinced. “The changes we make seem so shortsighted,” Phillips said. The dedication of the current staff and their perseverance in repair and maintenance are “intangibles no one thinks about,” according to Koopmans.

Faculty members have spoken out about some of these “intangibles” as well. According to economics professor Adel Abadeer, many faculty and staff “lament Calvin’s community covenant of shared value, mutual trust, concern and care for the welfare of one another” that’s been jeopardized by these changes. “I hope, one day, Calvin will be ‘one’ again, woven in Calvin’s covenant of shared ethical Christian values, mutual trust, and care and concern for the welfare of one another, where Calvin’s faculty and staff are treated as integral assets, not liabilities or disposable collateral,” Abadeer told Chimes.

“It is important to remember that Calvin works with a number of partners to fulfill our mission, including Creative Dining Services, Follet, Spectrum Health and I would expect that we can successfully partner with National as well.” Le Roy said in an email to Chimes, “[National] will enable us to prioritize resources so that we can continue to support a vibrant mix of programs for our students.”

After 41 years of glancing up at his code of conduct every morning, training and mentoring student employees, decorating the overpass for the holidays, and making extra trips to campus to clean the chapel, like he did on his last Sunday as a member of Calvin’s staff, Koopmans turned in his key.

“It was complete betrayal,” Koopmans said, “and I still love this place.”