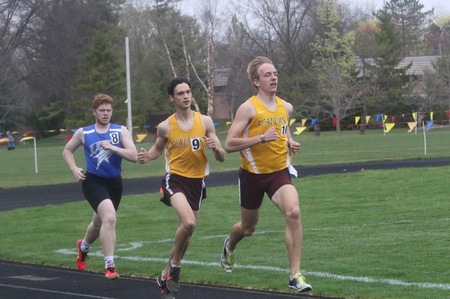 Calvin’s Simon Detmer broke the national record in the men’s 800m for T37 classification para athletes at a meet on April 8. The previous record had been held for more than two decades.

“When I came across the line, I knew I was close to the national record, but I didn’t know if I had cut it because I knew I was within hundredths of a second,” said Detmer. “When we figured it out, it was just such a huge honor.”

Detmer said he’s been dreaming of breaking this record for years. His time on Thursday of 2:16.88 was just enough to do so.

Detmer was born with cerebral palsy, a motor disability affecting about 1 in 345 children, according to the Centers for Disease Control and Prevention. A junior studying planetary geology, he’s fought through many disability-related injuries to become the runner he is today.

“I have right-side hemiplegia, which means my right side is partially paralyzed from head to toe. That means I have reduced muscle sensory ability, reduced muscle control, and weakness,” Detmer told Chimes.

Thursday’s record was not the first recognition of Detmer’s potential as a world-class athlete. In 2019, he was one of only 20 athletes selected to compete as a member of Team USA at the World Para Athletics Junior Championships held in Switzerland.

In addition to placing 13th in the 200m, 14th in the 100m, and 6th in the long jump at the championship, he was also the flag bearer for Team USA at the opening ceremony.

Detmer first started running his freshman year of high school, motivated by the opportunity to compete, the team environment and his family’s history of running.

As a result of his hemiplegia, Detmer propels himself using mainly his left side. He regularly cross-trains on a bike, in the pool, and with weights to prevent injury and develop strength and speed, according to Rick Otte, Calvin’s middle-distance event coach.

Detmer’s cross-training became all the more important in 2019.

Just after the 2019 world championships, he nearly stress fractured his tibia from overtraining. With the guidance of his coaches, Detmer took a step back and placed increased focus on strengthening and cross-training. He didn’t resume racing until last month.

“I was frustrated, but I knew I had a little bit of time to rebuild and refocus before the 2020 Paralympics,” said Detmer.

Thursday’s meet was his first time running the 800m in nearly 18 months.

“Going into Thursday, I didn’t know exactly where I was at, but I knew I was stronger than I had been previously. So, going into the opportunity to run the 800, I was very excited to see what could happen,” said Detmer.

Looking ahead, Detmer hopes not only to break the national records for the 400m and 1500m but also to compete at the 2020 Paralympic Games in Tokyo, Japan. The 2020 Paralympics were rescheduled to Aug. 24-Sept. 5, 2021 after being delayed due to the coronavirus pandemic.

Unfortunately, Detmer’s classification for the 800m was cut from the 2020 Paralympics event list. Instead, he’ll be looking to qualify for the 400m, 1500m and possibly the long jump. The games won’t have a T37 1500m either, so Detmer will be competing in the less-restricted T38 classification if he makes the cut.

T37 athletes, according to the World Para Athletics Classification, have muscle disabilities in one half of the body but demonstrate “good functional ability in running” despite asymmetrical arm movement. T38 athletes have mild to moderate muscle impairment that affects balance and coordination.

“I’m training not only to compete against people in my own category, but also those who are less physically limited, which makes it all the more challenging,” he said.

Prospects for making it onto the U.S. team depend upon his performance at races in Arizona in May and Minnesota in June. His training is designed for peak performance by the end of May, according to Rick Otte.

A typical week of training involves anywhere from two to three hours of exercise every day.

“Simon is kind, funny, and always has good energy. He brings enthusiasm to even the hardest workouts. It’s hard not to want to give it your all when Simon is there doing just that,” said fellow middle-distance runner Lindsay Pederson.

Detmer’s accomplishments don’t end on the track. As a planetary geology major, he’s been researching deep-sea magma flows alongside Professor Renee Sparks of the geology department and expects to submit papers for publication later this year. He says the project combines his interests in science and mathematical modeling well.

“Simon is one of a kind, which is why we call him ‘The One.’ Simon is a joy to work with. He might be the smartest person I have ever talked to,” said Rick Otte. “He has a relationship with his Lord and Saviour which might be stronger than anybody’s that I have ever known. He is also very humble.”

Detmer is still unsure of his plans after Calvin but hopes to attend graduate school.

“Simon is one of the most hard-working, genuine, Christ-loving people I have ever met. His hard work is evident to everyone through his recent performances on the track, but it is always on display to his teammates,” said teammate Derek Ten Pas, who helped pace Detmer on Thursday. “…No matter who you are or what you do at Calvin, he wants to sit down and have a conversation with you about what you’re passionate about.”