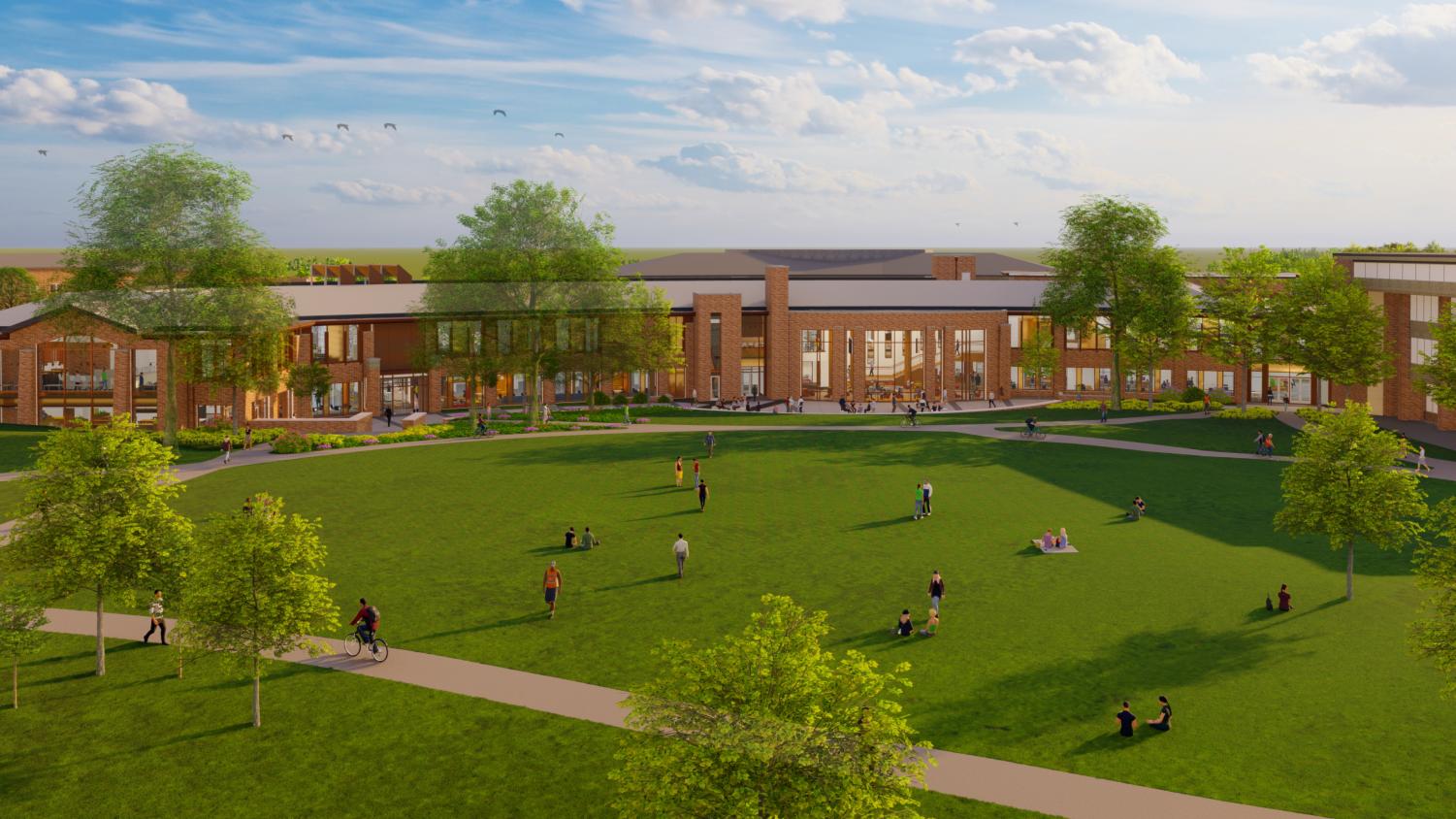 Calvin is planning to build a new Commons Union that will replace Commons dining hall and annex. To date, the university has raised $28 million for the project from donors.

Although the building’s design was finalized in the summer of 2020, construction will not begin until funds are fully pledged, according to Sarah Visser, the Vice President for Student Life. She couldn’t give an estimate of when fundraising will be complete, but said that the university is excited to get started on the project as soon as possible.

Visser shared videos showcasing the design with Chimes. The new dining hall will be able to seat up to 800 students, and the seating outside Johnny’s Market will hold another 140. Dining hall options will include “nine unique restaurants” including pizza, southwest and Asian-fusion options. Dining hall hours will be extended, and having only one dining hall will save $1.2 million on annual costs, according to one of the videos.

The lower level of the building will include an open seating space with a fireplace and floor-to-ceiling windows overlooking commons lawn.  Called “Calvin’s living room,” the area aims to promote community.

The bookstore and career center will also be located on the lower level, along with the new Commons Event Hall, student organization spaces, orientation board offices, and multicultural program offices. The new building will be connected to Hekman Library through a lobby space called the “winter garden” which will include a vertical green wall, and an indoor tree.

The second level of the building will include multiple conference rooms, new offices for Chimes and Dialogue and Campus ministries.

Outside, the CFAC parking lot will be removed and replaced with a plaza connecting the Commons Union and the CFAC.

Centerbrook Architects and Planners and GMB Architecture and Engineering are currently involved in the project. Chimes spoke with Jim Childress, Centerbrook’s lead architect on the Commons Union.

According to Childress, the underlying goal of the project was to centralize dining and create “a gathering place for the Calvin community.” Childress said that Connecticut-based Centerbrook beat out other architecture firms in Calvin’s nationwide search to get the contract.

“Calvin was looking for something forward-thinking,” said Childress, adding that the integration of student life, academics and performing arts was an original idea that most other schools aren’t doing yet.

Holding workshops with the Calvin community was an important part of the design process, according to Childress. In Oct. 2018, Childress and his team visited Calvin to find out what people wanted from the new building. Many students raised the idea of an indoor connection between Commons Union and the library to keep warm during the winter. Students also suggested the winter garden.

Childress emphasized that the atmosphere created by the outside of the building is also very important. The plaza between the Commons Union and the CFAC helps create a more urban environment for the CFAC, and the curvature of the Union was carefully thought out.

According to Childress, sustainability was an important factor of the design. “We went through long discussions about that,” he said. “We pushed that as far as we could.” The goal is for the Commons Union to not increase Calvin’s carbon footprint. However, according to Childress, it is not possible to run the new building with renewable energy. Current energy models estimate that the new building will have approximately the same carbon footprint as the current Commons dining hall and annex, despite its much larger size.

The building will feature two elevators with one on each end. Making the elevators clear and convenient was an intentional choice to promote accessibility, Childress said.

In addition to Centerbrook, Calvin has been working with Grand Rapids-based GMB architecture and engineering. Childress praised GMB’s local expertise and expressed appreciation for how well the two firms have worked together.

The architects and Calvin’s administration debated whether to tear down Commons dining hall or simply expand it. They decided that keeping Commons was not feasible for cost reasons. Childress expressed his disappointment that Commons must be demolished. He hopes the spirit of the building will carry over to the new Commons Union.

Childress added that trying to find the correct ‘tone’ for the building was crucial. “We wanted something new, but also a continuation, nice, but not overdone,” he said, adding that the students with whom he consulted brought a “youthful enthusiasm” to the project.

When it came to the project’s price tag, Le Roy made his expectations clear to the architects. “He looked at us and said ‘You are not going over budget’,” said Childress.