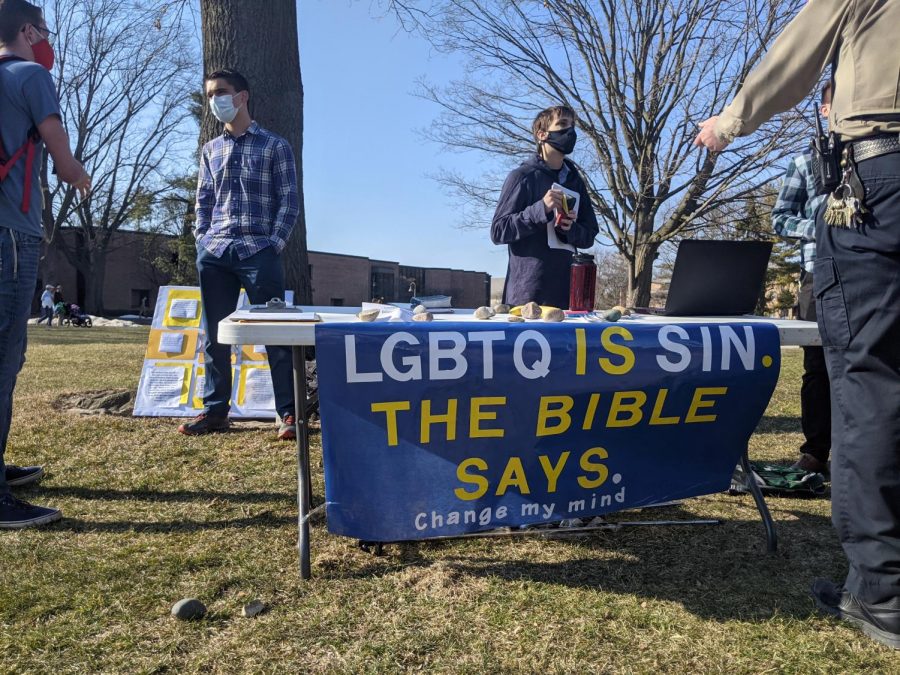 A student-organized table on Commons Lawn spread anti-LGBTQ messages on Tuesday. The university is currently reviewing whether or not they followed the proper procedures to arrange their event.

An anti-LGBTQ tabling event on Commons Lawn on Tuesday brought conversations about LGBTQ issues on campus to a boiling point.

“LGTBQ is sin. The Bible says. Change my mind,” read the table’s banner. The students running the table said they were from a Friday Bible study group and claimed to have received approval for their table from Campus Ministries.

Sarah Visser, vice president for student life, denied that the university had approved a table discussing LGBTQ issues. Instead, the students involved incorrectly and misleadingly submitted approval forms for an apologetics event.

“The form did not indicate the true nature of the information ‘table,’ but indicated it was about Christian apologetics,” said Visser. “It is important to note that no approval for an LGBTQ-based debate or conversation was requested nor approved.”

The table was eventually shut down by Campus Safety and university officials due to questions about its approval by the university and because it was not following COVID safety guidelines.

The group’s leader, Paul Dick, spoke with Chimes at the event, explaining that the Bible study hosted the table out of concern for the salvation of Calvin students being misled by LGBTQ-affirming professors. The Christian Reformed Church currently teaches that sexual orientation is not a sin but that action on homosexual desires is. Dick was clear in conversation that he embraced the CRC stance.

The group’s sign, however, seemed to target sexual orientation as well as action.

Letter to the Editor: LGBTQ+ students belong at Calvin 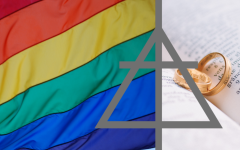 What you should know about the new CRC report on sexuality

“It communicated that people, not their actions, beliefs, or behaviors, are a sin. It is possible that their handouts/pamphlets (which I do not have) clarified this sentence; regardless, an anti-LGBTQ message was sent and received,” said Director of Gender Studies Elisha Marr.

Dick did not immediately respond to email requests for comment after the event.

In a campus-wide email, President Michael Le Roy called out the event for failing to live up to Calvin’s community standards. Administrators are currently reviewing whether the students involved followed the proper procedures and policies to host an event, he said.

“We at Calvin University believe in the God-given dignity and worth of all people, and we acknowledge and mourn the ways in which our nation, our churches, our communities, and Calvin University have not always defended the worth and dignity of members of the LGBTQ+ community,” Le Roy said. “As fellow image-bearers of God, we write today to affirm the image of God in our LGBTQ+ friends. We want all of our students to know that they are loved.”

A number of professors and students wore “You Are Loved” t-shirts on Wednesday as a display of support, according to Marr.

“In this context there should not be any topics, issues, or content that are off-limits for discussion, but there is great responsibility to engage controversial topics in a way that welcomes diverse voices and fosters learning and understanding. The table… did the opposite,” said Marr.

Marr called the table’s tone “defensive and haughty,” saying that the phrase “change my mind” made clear that the event was not a genuine request for engagement.

A silent sit-in supporting LGBTQ students is planned on Commons Lawn from 3-5 p.m. on Thursday and the Center for Counseling and Wellness is holding a Without Shame safe-space conversation from 4-5 p.m. for members of the LGBTQ community to process.

The Sexual and Gender Awareness student organization also plans to host a chalking event from 5:30-6:30 p.m. on Thursday to spread messages like “You Are Loved” and “You Belong Here” across campus, according to a Facebook post.

Social media posts about the event from student organizations like the Calvin Democrats and Student Senate went viral as students replied with expressions of anger and hurt.

“We are encouraged to love one another and to seek understanding,” Student Senate stated on Instagram. “We will disagree, but let us do so in a loving manner.”

Concerned students criticized the response in comments, calling it a “non-statement” and claiming that Student Senate had failed to address “homophobia” and “harassment” that occurred on Tuesday.

The Calvin Democrats proclaimed their support of the LGBTQ community at Calvin but disabled comments on their posts regarding the event due to the overwhelming response from students and alumni.

Marr said she is working with others at Calvin to create safeguards preventing future events that are inconsistent with Calvin’s policies for freedom of expression.

This article has been updated to quote the words harassment and homophobia.