This Land is Your Land: Learning from Grand Rapids Native History 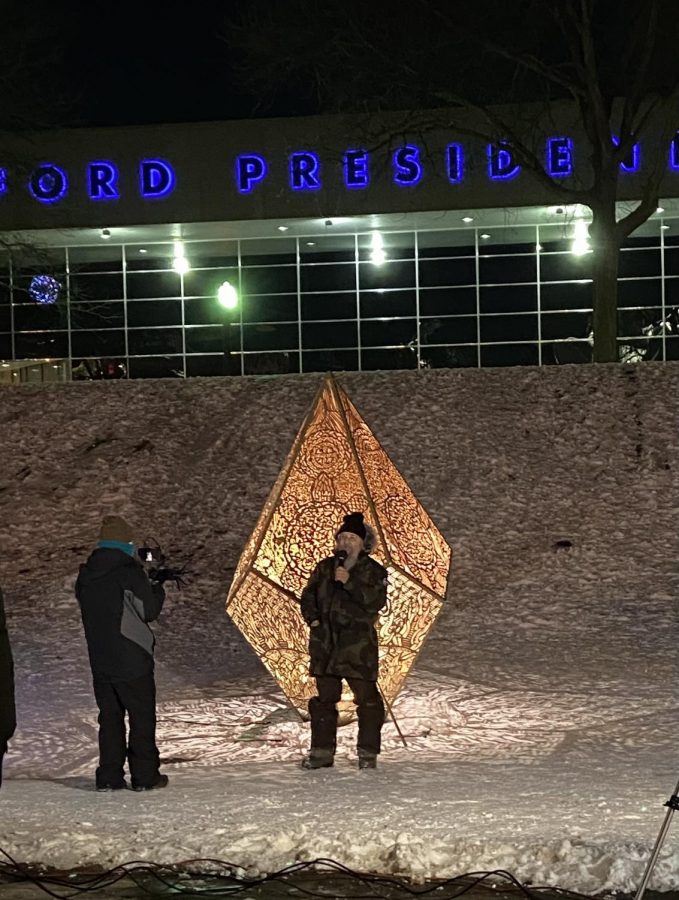 Ron Yob speaks in front of the “Manidoo Bawating” sculture at the Tribal Stories event in Ah-Nab-Awen Park.

A clear, loud voice sang over a crowd of huddled people at Ah-Nab-Awen Park on Jan. 28. The colored lights of the HYBYCOZO art installation splashed intricate shadows across the snow-covered ground, cascading out along with the voice towards the Grand River. Those in the crowd beat their chests to the rhythm of the song.

The voice belonged to Ron Yob, chairman of the Grand River Bands of Ottawa Indians, who was singing the AIM (American Indian Movement) song—an intertribal anthem that he first learned in 1978 during the Longest Walk. This march was made by hundreds of Native Americans to protest threats to their land, water rights and culture. Although Native Americans have made progress since 1978, the fight is far from over. According to Yob, Ah-Nab-Awen Park itself, with its plethora of Native symbols and art, stands on stolen land.

During the night at Ah-Nab-Awen Park and in conversation with Chimes, Yob explained the symbolism behind the light installation’s most prominent structure, “Manidoo Bawating,” and shared stories of the land and the people who inhabited it for thousands of years.

Only 100 yards away from “Manidoo Bawating,” stands a sole wild plum tree, marking the site of a Native healing lodge and plum tree grove burned to the ground by settlers centuries ago to use the site’s fertile land.

Infringement on the land and culture of Native Americans is not just a thing of the past. “The term ‘settler colonialism’ is often used today to communicate that even if we or our ancestors were never a part of acts of violence or other forms of conquest, we nonetheless benefit from it because we live and work on that land,” said William Katerberg, a professor of history at Calvin. “In one way or another, we’re participants in settler colonialism.”

According to Katerberg, it was not just land that was stolen. Assimilation efforts worked to steal Native culture away as well. Yob’s mother, Angeline ‘Naw Kay O Say’ Yob was removed from her Native family when she was five years old and placed into a government-run boarding school. “They were trying to take the Indian out of them,” said Yob.

Because of this time of lost heritage, storytelling and teaching are immensely important to Yob and the Grand Rapids Bands of Ottawa Indians today. Angeline Yob’s work with the Native children in Grand Rapids during the 1970s has aimed to preserve and restore the Native culture that was once stripped from her. The program she founded in service of the Native children still exists today.

“It’s not so much that Native American stories were not told within Native American communities–they continued to be told even despite efforts by white Americans to repress and ignore them,” said Katerberg. “What’s important in the present is the growing willingness of non-Native people to want to hear more and not just grudgingly listen,” explained Katerberg.

Often, European Americans have not interacted well with real Native history, rather appropriated and distorted retellings. “Going all the way back to the colonial period, British settlers and later Americans would ‘play Indian’ as a way of shaping their identity or making a political claim,” said Katerberg. The appropriating act of “playing Indian,” a term coined by author Philip Deloria, is still seen in many civic organizations today from the Boy Scouts of America to the Cleveland Indians.

Though in the past thirty years efforts have been made by Grand Rapids and other cities to acknowledge settler-colonialism, these efforts often go awry. One such example is the fake burial grounds that can be seen in Ah-Nab-Awen Park. Meant to commemorate the over 60 graves that were destroyed and robbed by settlers who wanted fill dirt for the first river walls on the Grand, these fake mounds are largely disliked by local Native peoples.

We can’t just graft Native stories onto the dominant European American narrative—we have to retell the history from the roots up.”

“The Indians never wanted those mounds there…They are manicured sculptures with sprinkler systems and mowed grass—there’s no Natives buried there,” said Yob. “It’s a mockery of an Indian cemetery because there are actually real mounds probably about 5 miles down the river,” he said.

The Hopewell Indian Mounds Park, closed to the public due to mistreatment and vandalism, was threatened in the 1970s when those in charge attempted to cut into one of the mounds to create an exhibit for public viewing. Yob and others protested this attempt, and now the park is protected by a fence.

In 1990, the Native American Graves Protection and Repatriation Act finally mandated that Natives be given primary claim over the artifacts and histories discovered (and often stolen) by anthropologists, historians and scientists. “The challenge is not to just take the Native American stories and incorporate them into the story we already have,” said Katerberg. “We can’t just graft Native stories onto the dominant European American narrative—we have to retell the history from the roots up,” said Katerberg.

Although the persecution of Native peoples continues today, Yob encourages others to not be angry in their advocacy. “Anger and hatred can be blinding,” said Yob. “We don’t forget our stories, and still teach them to our kids—but we don’t do it in an angry tone. One of the biggest things a human being can do is to forgive.”

Students eager to learn more about Native history and the land we live on can attend the upcoming Tribal Stories event on February 27th at Ah-Nab-Awen Park.

2 Responses to “This Land is Your Land: Learning from Grand Rapids Native History”