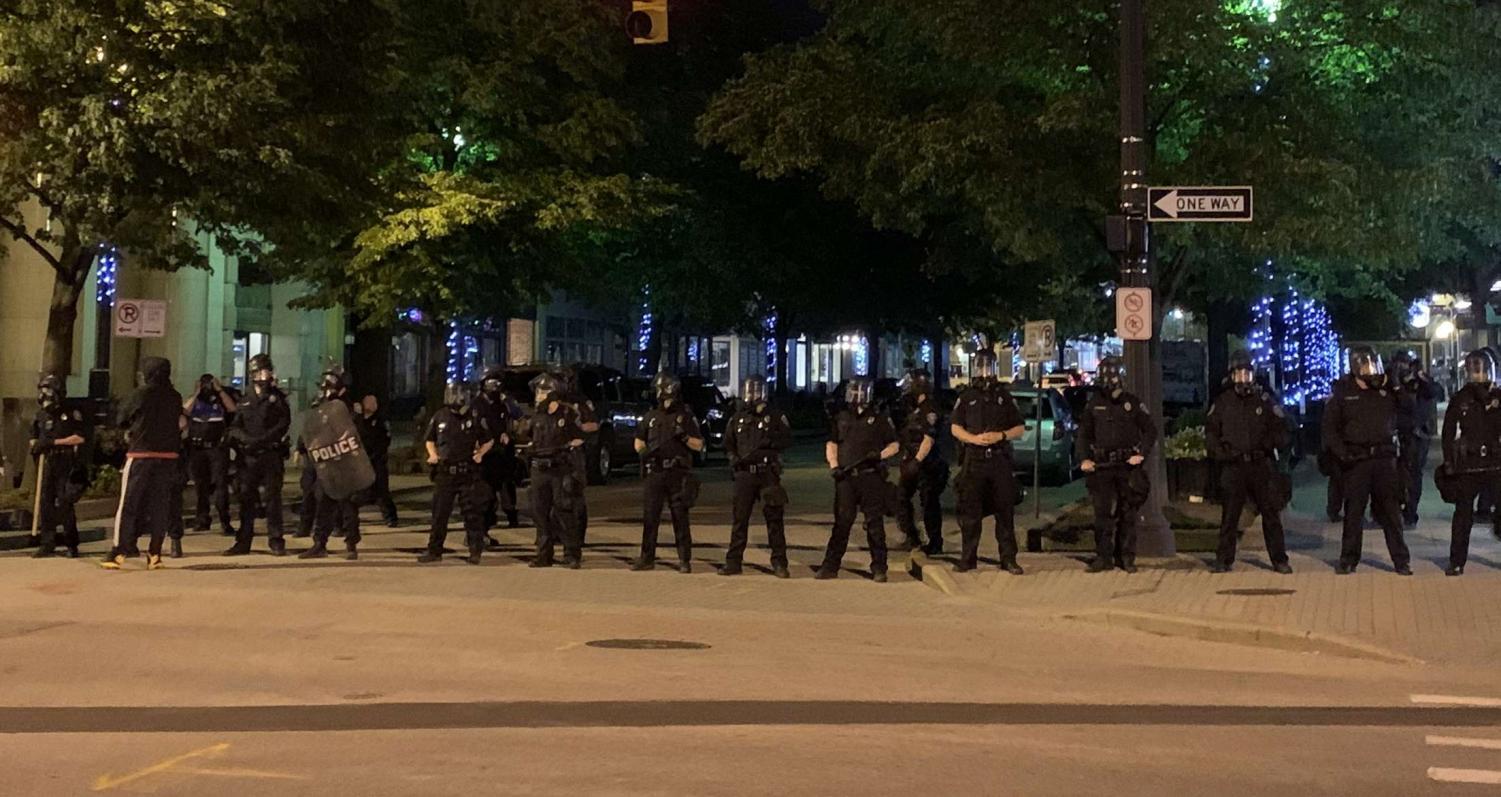 Reformed and always reforming… the police?

Why Reformed Christians should listen to calls to defund the police

The first time one of my graduates called to defund the police, I dismissed the idea immediately. Even as more graduates embraced calls to defund or abolish the police, I continued to dismiss such narratives as naïve or harmful.  However, I knew these graduates were intelligent, loving people.  Calvin University had equipped them to think deeply, act justly, and live wholeheartedly.  The Holy Spirit convicted me.

Reformed Christians should wholeheartedly embrace calls for radical police reform, and recognize that calls to defund or abolish the police stand in the tradition of the Radical Reformers.  My dismissal of such calls reflected a failure to understand my own tradition, a failure of my catechesis, a lack of theological imagination.  It also reflected a failure to listen to those most affected by this issue, and let them lead.

I will use Grand Rapids as an example here, but it is representative of any number of cities.  Probably your city.  In my classes, I warn students when things are “about to get really Reformed,” out of recognition that students may come from other traditions, or no faith tradition.  This is a good place for that warning.  I am writing particularly, but not exclusively, to white Reformed people like me.

Growing up, I celebrated Reformation Day in my Christian schools.  We studied Luther, Calvin, and Kuyper, but I was taught almost nothing about the Radical Reformers: the Hutterites, Mennonites, and Amish.  I was taught that being Reformed meant that we are agents of renewal, that we work from inside institutions to reform them.

The Radical Reformers had a very different perspective.  They rejected both the Catholic church’s cozy relationship to the state and the parallel structures they saw Protestants establishing.  They chose not to disengage but to disentangle themselves from systems in order to be a living witness to an alternative reality.  If they could not participate with integrity, they accepted any consequence, even death.

Calls to defund or abolish the police are calls to disentangle from a system with racist roots and imagine alternative realities.  Even Reformed Christians who feel these calls are too radical should respect this position.  After decades of failed police reform, the onus is on those who engage with the system to demonstrate that it’s possible to reform fallen institutions.  And let us in no way doubt that these are fallen institutions, staffed by fallen people. Fallen is important language, because these systems are not “broken.”  They are, as Michelle Alexander and others have pointed out, functioning as intended.

Reformed Christians also reject any discussion of “bad apples” in a good system.  Each of us, to borrow from Calvin’s Institutes, produces evil “as a lighted furnace sends forth sparks and flames, or a fountain without ceasing pours out water” (2.1.8).  Derek Chauvin was born with “a natural tendency to hate God and… neighbor” (Heidelberg Q&A 5).  Like you, like me, like victims of police brutality.  A Reformed catechesis therefore rejects any narrative which insists on the complete innocence of victims of police brutality as a prerequisite for empathy or action as absurd.

This is not in any way to equivocate between the actions of Derek Chauvin and George Floyd, between Ahmaud Arbery and the father and son who lynched him, between Breonna Taylor, who was born in Grand Rapids, and those who murdered her in her own home as she slept.  To say that everyone sins is not to collapse into an undifferentiated world filled with Christian platitudes about how “all sin is equal in God’s eyes,” where forgiveness comes without repentance, grace is cheap, and there is no justice.   The Belhar Confession, one of our contemporary testimonies, is clear “that God… is in a special way the God of the destitute, the poor and the wronged.”

We also believe that God created humanity “good and in his own image” (Q&A 6).  But no one, no institution, nothing, is totally good but God. To imagine that an institution is free from the corruption of sin and deserves our uncritical support is to create an idol.  Anyone who reads Romans 13 as advocating such blind adherence ignores the Belgic Confession’s call for the  state to build “a society that is pleasing to God” and that our obedience is limited to that which is “not in conflict with God’s Word.”

I grew up not going to certain neighborhoods because they were “dangerous.”  No one ever explicitly said because they were Black, but they didn’t need to.  Grand Rapids is a “hyper-segregated” city, the 26th most-segregated city in a sample of more than a hundred. It was not until graduate school that I understood this segregation as a legacy of the Great Migration’s flight from lynching, of redlining and racial covenants.  The government created this segregation, and when it resulted in the widespread poverty that exploded in the summer of 1967, decided that policing was the right response.  Law and order.

Meanwhile, the Grand Rapids Police Department (GRPD) is disproportionately white.  In 2017 the force was 89.5% white, 4% Black.  The city is 68% white, 19% Black.  These disparities exist all over the nation.  The vast majority of officers, 83%, are not residents of Grand Rapids.  There is evidence that GRPD engages in racial profiling.  A 2015 study found that Black motorists were twice as likely to be pulled over as white motorists.

until we can identify Christ with a ‘recrucified’ black body hanging from a lynching tree, there can be no genuine understanding of Christian identity in America”

We spend a tremendous amount of money on the police.  Grand Rapids is budgeting $56 million for 2020.  The City Charter itself mandates that “Not less than 32%” of the budget be spent on policing.  Nationwide, we now spend twice as much on law and order  as we do on social welfare programs.

As a social worker, I believe shifting resources to education,mental health, affordable housing, substance abuse, or domestic violence would keep us safer.  No one wants violent crime, but Grand Rapids has chosen not to implement evidence-based violence reduction programs despite proposals to do so.  You may imagine that police spend most of their energy on violent crime, but 95% of arrests in the U.S. are for non-violent offenses.

Policing itself is a relatively recent development, evolving from slave patrols and privatized security forces protecting the property of capitalists.  The modern militarized version is even more recent, emerging from our failed War on Drugs.

I realize that beyond my ignorance of this history, part of my inability to understand the deep distrust and profound anger of my Black brothers and sisters towards the police flowed from my misunderstanding of who God is, especially as revealed on the cross.

I first read the Black liberation theologian James Cone because of his influence Allan Boesack, one of the authors of the Belhar Confession.  Cone writes:

“Until we can see the cross and the lynching tree together, until we can identify Christ with a ‘recrucified’ black body hanging from a lynching tree, there can be no genuine understanding of Christian identity in America.” (p. xv)

I could not see this. For much of my life, I was ignorant of the nation’s legacy of lynching.  That history became very real in 2015, when I had the honor of visiting the Equal Justice Initiative.  I met Anthony Ray Hinton, who had been released earlier that year after 28 years on death row.  He was an innocent man who would have been executed.  Lynched.  Later, in one of the most somber moments of my life, I helped collect dirt from the site of a lynching.

Lynching, like crucifixion, is state sanctioned violence designed to terrorize oppressed populations in order to ensure that they remain cheap labor for those regarded as full citizens of the Empire.  The Pax Romana and the Pax Americana were built on brutality, whether at the hands of the Roman legions or the hands of our increasingly militarized, “imperial,” police.

Such state sanctioned violence is often encouraged, even blessed, by the religious establishment.  Innocence is irrelevant.  These are public acts designed to be widely viewed, whether on a hill in Georgia or Golgotha.  They are immortalized in stories, or on postcards, or videos on the internet.  I imagine you have watched videos of some of the hundreds of Black men, women, and children killed by police, the hundreds more brutalized protesting those deaths. Do you see Christ?

I try to no longer watch such dehumanizing videos.  But Grand Rapids has them.  Black boys lined up face down on the pavement for matching a description.  Teens arrested at gunpoint for “failing to cooperate.”  Officers placing a weeping 11 year old girl in handcuffs because they thought she was an adult.  An officer shattering a car window, removing the driver, and beating him as he screams that his child is inside the car.

Can we read these accounts and see Christ?  Or must we watch the videos, put our hands in the wounds, before we can say, like Thomas, “My Lord and my God!” (John 20:28).

According to the Word of God

I know police have helped apprehend dangerous criminals.  Saved lives.  There have been acts of service and compassion.  If reading this has made you angry, I ask you to sit in that space.  Ask yourself “what would it mean if this were even partially true?”

I have never had a problem with the system of policing.  But many of my Black brothers and sisters tell me it’s killing them. ”

You may believe that policing can be reformed from within.  But Minneapolis aggressively pursued police reform for decades.  They have come to the conclusion that it is time to reimagine community safety.  The Radical Reformers would want nothing to do with a system of state sanctioned violence, but the history of the wider Reformation is itself a testament to the fact that some institutions are beyond reforming from within.

Any change must be radical. Radical from the Latin radix, the roots.  Policing grew out of the ground of slavery and white supremacy, watered by the interests of the wealthy.  George Floyd and Breonna Taylor are the strange fruit of that tree.  As Jesus says, “a bad tree cannot bear good fruit. Every tree that does not bear good fruit is cut down and thrown into the fire” (Matthew 7:18).

The Bible also provides a model for reimagining a failed community program.  In Acts 6, we read of a dispute between Hellenistic and Hebraic Christians over a program to feed widows.  The Greek speaking Christians tell the Jewish Apostles their widows are not being fed.  The Apostles are convicted, and in response turn the entire program over to a group of seven Christians, notably all with Greek names.  Like the Hebraic widows who were getting fed, I have never had a problem with the system of policing.  But many of my Black brothers and sisters tell me it’s killing them.

Members of the most affected community are calling for change, and I need to listen and let them lead. I cannot know Christ if I refuse to see him in the recrucified Black body. I cannot proclaim that Black Lives Matter while supporting a system that disproportionately takes them.