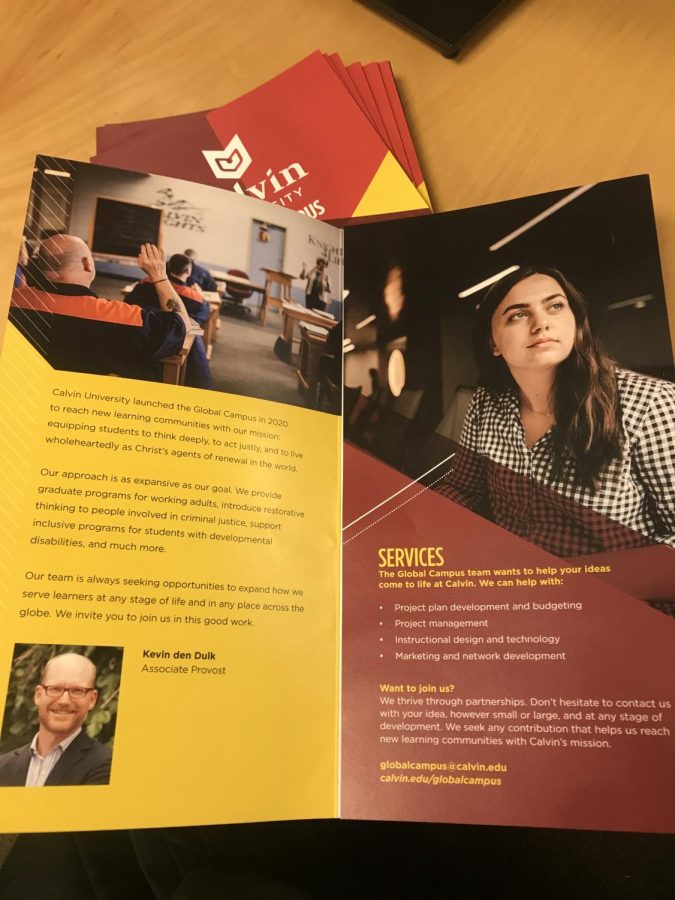 The Global Campus is focused on expanding opportunities for non-traditional students at Calvin.

Calvin’s Global Campus is working to expand existing partnerships and develop new ones in an effort to better engage with local communities. This new focus, informed by the university’s Vision 2030 plan, relies on support from the Global Campus for planning, budgeting and legal agreements, as well as proactive contact with potential partners to identify needs.

The university’s Vision 2030 plan, released in 2019, delineated the university’s growth goals for the next decade.  The Global Campus — an office that intentionally focuses on expanding Calvin’s programs to non-traditional students — is stepping into this vision by developing a comprehensive strategy for developing new partnerships, moving from a more “isolated” and “opportunistic” approach to one that reflects a “culture of partnership” across campus, according to Associate Provost Kevin den Dulk.

“A lot of the work that we were doing was opportunistic and isolated,” den Dulk said. Past partnerships have usually arisen through groups in different departments on campus identifying and pursuing an opportunity, without centralized support. “We haven’t, in the past, as an institution, had a strategy for supporting that and saying, ‘we’ve got a way of doing partnership,’” den Dulk said.

Calvin has worked with partners before. “What we’re really saying is ‘how can we develop an overall strategy and vision for doing partnership really well …  and then use that kind of culture for engaging the city and engaging in pockets around the globe?’” den Dulk said.

Among the programs the office already oversees are the Calvin Prison Initiative and Ready for Life.

Part of the office’s work is to conduct an assessment of needs, by sitting with potential partners to identify their needs, den Dulk told Chimes.  “We’re doing partnership development: developing the relationships and understanding the needs,” he said. “The last thing I would want us to do is to parachute into a place and say ‘we know what you need, and here it is.’”

An example of Calvin’s current partnerships is its newest partnership with Pine Rest, through which eligible nursing students will receive a scholarship and work at Pine Rest both during their nursing program and two years after being licensed in Michigan.

The office also assists in developing written agreements with partners “where we’re just figuring out ‘okay, here’s the need. Here’s what we’re offering. Let’s write it all down.’ But [we] do that in a really clear way,” den Dulk said.

The new strategy is being developed, in part, through the creation of new positions, including a new director of Strategic Partnerships — a position filled by Shaq Anthony — and a director of Continuing Studies — filled by Abbie Lipsker.

“Those two are really key people on my team in the Global Campus, who are helping us move forward with both partnerships and new types of learning through microcredentials,” den Dulk said.

Anthony told Chimes that the new approach to developing partnerships stems from “being able to show up” and “[be] exactly who we say we are” as a university. “My new role was built out of that focus,” he said.

“Anthony and I work collaboratively to seek out, build or strengthen relationships with community partnerships. There’s not currently a ‘Community Partnership Program,’ but rather we are building external partnerships as pipelines into programs and developing a database to store that information,” Lipsker said in an email to Chimes. “Calvin already has a robust network of partners in the surrounding communities, but we are developing a larger institutional strategy behind our partnerships.”

“Where have you been?”

Den Dulk told Chimes that the university is developing this new strategy now for three main reasons: values in the 2030 plan, partners reaching out to the university and the goal of seeking the welfare of the community.

“So it was partly about us saying we want to be this trusted partner in our vision. But it was also about potential partners coming to us and saying, ‘Hey, where are you guys?’” den Dulk said. “So you know when we hear that I think, ‘Yeah, where have we been?’”

Lipsker expects new partnerships to increase opportunities for nontraditional students. “Every opportunity that we’ll provide for adult students, we’ll do as a part of a partnership,” she said.

Den Dulk also hopes that the university will be known beyond its “typical bubbles in the city,” including outside of the United States, while still keeping a focus on Grand Rapids.

“I would hope that at the end of the day there are populations that are learning communities in the city who say, ‘yeah, Calvin is a place for me,” he said. “By the same token, I’m hoping that in certain pockets around the world where we already have some relationships but have not fully developed them that we have the same experience.”