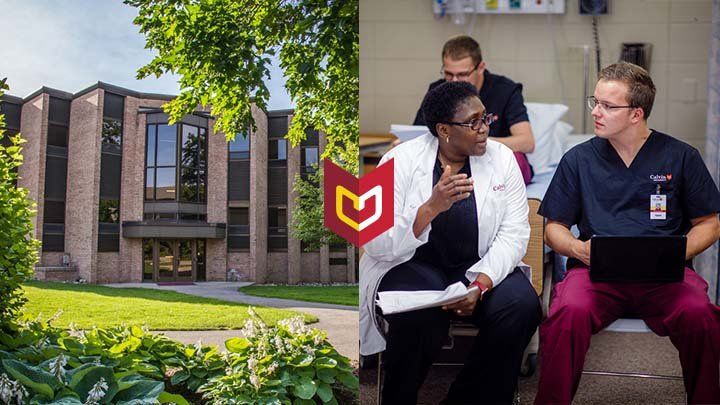 Nursing professor Adejoke Bolanle Ayoola will be the School of Health's founding dean.

Calvin’s School of Health, established after an anonymous alumn donated $15 million in October 2021, has named its inaugural dean and begun assembling an advisory council. Three graduate programs are expected to launch by fall 2022.

A search committee consisting of representatives from each of the School’s programs as well as Provost Noah Toly has named nursing professor Adejoke Bolanle Ayoola the School’s founding dean.

A Calvin faculty member since 2007, Ayoola has taught for both the nursing and public health programs and chaired the nursing department. She is a former Robert Wood Johnson Foundation Nurse Faculty Scholar and American Academy of Nursing Fellow and currently helps to guide 12 scholarly publications. She earned her bachelor’s and master’s degrees in nursing from Obafemi Awolowo University in Nigeria and her doctorate from Michigan State University. She will officially take the helm on July 1, overseeing the about 600 undergraduate and 75 graduate students in the School’s domain.

Ayoola is known for encouraging interdepartmental collaboration and involvement with local communities and has had a hand in several collaborative women’s health initiatives. Preconception Reproductive Knowledge Program, which Ayoola helped to found in 2012, pairs local women with nursing students and professionals to help improve knowledge of menstrual and reproductive health. Ayoola also founded H.E.A.L.T.H. camp, a program that brings together faculty from five Calvin departments to teach more than 100 girls about health and health careers each summer.

“I am motivated to act when I see people or members of my community hurting —physically, emotionally, and spiritually— and when the vulnerable population experience health challenges,” Ayoola said in a press release. “I see health as an important part of what God wants for us.”

In addition to leadership and academic personnel, the School of Health’s founding gift is planned to support equipment investments — including a new $575,000 laboratory and classroom in the former West Michigan Regional Laboratory space —, and expanded course offerings for undergraduates, graduates and non-degree adult learners in the disciplines of nursing, kinesiology, exercise science, speech pathology and audiology and public health.