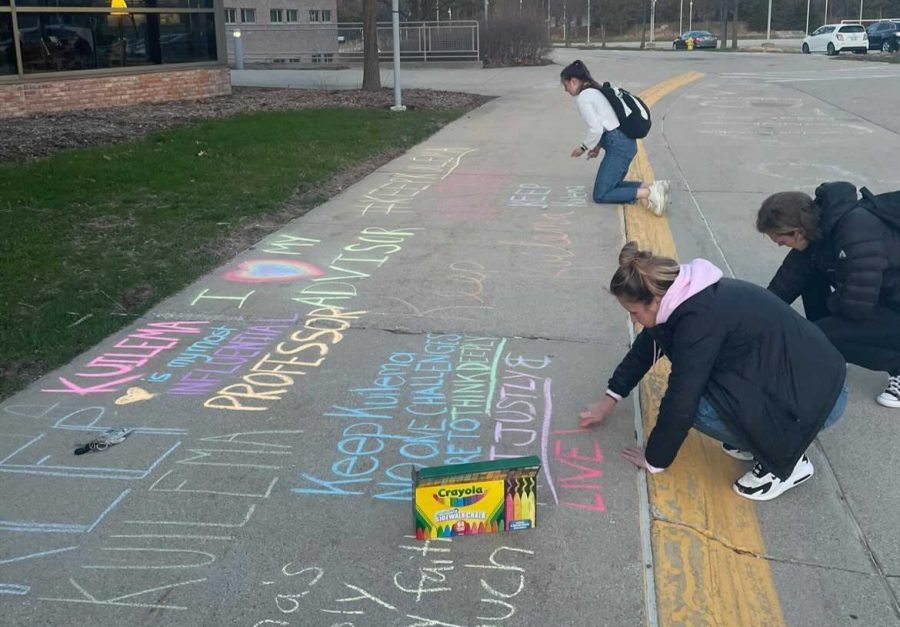 Students gathered outside the Prince Conference Center on Tuesday to chalk messages of support for social work professor Joseph Kuilema in advance of a board of trustees meeting this week. (Photo by Taryn Hoeksema)

Calvin’s Professional Status Committee has recommended against reappointing social work professor Joseph Kuilema due to his decision to officiate a same-sex marriage ceremony, according to documents obtained by Chimes.

A memo from the provost, sent to Kuilema and other members of his department on April 18, laid out the reasons for the decision not to renew his contract. Included with the memo were a summary of the PSC’s discussion and Dean Benita Wolters-Fredlund’s five-page summary of Kuilema’s reappointment dossier, complete with her own recommendation against renewing his contract.

In justifying its recommendation, the PSC cited Kuilema’s failure to consult with Calvin’s administration when making the decision to officiate a same-sex marriage ceremony and “a lack of adherence to the commitments Prof. Kuilema made as a Calvin faculty member to live within institutional guidelines.”

News of the PSC decision raised concerns among faculty, staff and students alike. Eighty-eight professors signed a letter to the board of trustees, which meets this week, stating their disagreement with the decision. As of Thursday morning, 30 staff members had signed a separate letter expressing similar concerns.

“We are afraid of how the decisions we make in our personal lives may impact our employment. Joe Kuilema’s actions in participating in a same-sex marriage occurred within the bounds of his personal life. Same-sex marriage is legalized in all 50 states of our country,” the staff letter reads in part. “A legal, personal action has become an employment matter, which sets a troubling precedent.”

Links to the complete memo recommending against Kuilema’s reappointment and the faculty letter to the board of trustees can be found at the end of this article.

On Oct. 15, 2021, Kuilema officiated the civil marriage ceremony of Nicole and Annica Sweda. Nicole Sweda was also an employee of Calvin at the time, working at the Center for Social Research.

Less than two months later, unaware that Kuilema had officiated the ceremony, Wolters-Fredlund, as dean for humanities, arts and social sciences, recommended that Kuilema’s appointment at Calvin be renewed for two years. The PSC voted to affirm her recommendation on Dec. 2.

Then, on Dec. 10, Provost Noah Toly was given photos of the wedding and subsequently began the process of bringing Kuilema’s reappointment before the PSC for reconsideration, according to the memo. Such a process is outlined in the university’s faculty handbook.

When Toly later learned, in January, that Nicole Sweda was also employed at Calvin, he initiated the CSR’s departure, rather than firing her for violating the staff handbook’s policies against same-sex marriage

According to dates listed on the memo, the PSC reconsidered Kuilema’s reappointment on April 4. Kuilema declined to speak with reporters or provide information after receiving the committee’s recommendation.

Under the provisions of Calvin’s faculty handbook, professors who are not granted reappointment have 10 days to appeal in writing to the executive committee of the board of trustees. In an email to social work majors on April 20, Kuilema expressed his intent to do so.

Should the board choose not to affirm his appeal, Kuilema’s employment at Calvin will end in August, according to the memo.

The PSC’s recommendation against reappointment isn’t the first time Kuilema has found his employment at Calvin in jeopardy for his advocacy on LGBTQ+ issues.

Four years ago, the social work professor was denied tenure by the board of trustees, despite a unanimous recommendation from the PSC. At the time, faculty wondered whether Kuilema’s advocacy for LGBTQ+ students had played a role.

The most recent memo concerning his reappointment confirms that it did:

“In his February 5, 2018 letter to Prof. Kuilema explaining the Board’s decision to deny him tenure, Board chair Craig Lubben makes it clear that while Prof. Kuilema has the ‘freedom to disagree with a position of the CRC,’ the Board has concerns over how this disagreement has been expressed. As Lubben explains, ‘before reappointing you with tenure, the Board needs more evidence that you are committed to working within college policies and procedures,’” wrote Wolters-Fredlund.

After the board’s 2018 decision to deny tenure, Kuilema was granted a two-year renewable term appointment, according to the memo. His current appointment is his second such term. Because term appointments are not considered faculty-track positions, the PSC’s decision not to reappoint Kuilema does not require the board’s approval. Rather, the final decision is made by the university president and relayed to the board in the president’s report. “Normally, the president will affirm the decisions of the Professional Status Committee,” the faculty handbook states.

Calvin’s staff handbook labels sexual activity outside of a heterosexual marriage as sexual misconduct, a position in line with the Christian Reformed Church’s stance on human sexuality.

“Though it is the university’s policy to assure equal opportunity in its hiring, personnel practices and admissions without regard to marital status or sexual orientation, sexual relations outside of marriage are proscribed (See e.g., Handbook for Teaching Faculty – Section 6.1.2). Marriage is understood by the university and the Christian Reformed Church, with which it is affiliated, to be a covenantal union between a man and a woman,” the handbook states.

This policy was the basis for the events that unfolded with the CSR’s departure and in Kuilema’s reappointment decision.

“Prof. Kuilema’s act of officiating a fellow employee’s LGBTQ+ wedding strongly suggests that he condones behavior out of step with stated policies and could furthermore easily be interpreted by outsiders as Calvin condoning such behavior, regardless of Prof. Kuilema’s intent,” Wolters-Fredlund’s rationale reads in part.

Wolters-Fredlund and the PSC’s recommendations also noted Kuilema’s failure to consult the proper officials at Calvin in making his decision to officiate a same-sex wedding ceremony.

“Homosexuality and the Calvin Community,” or HCL 3, as it’s more commonly referred to, is Calvin’s guiding philosophy for dealing with issues of human sexuality in the university. In addition to HCL 3, the PSC’s discussion references guidelines laid out in the faculty handbook and documents relating to academic freedom. All three of these documents place a high emphasis on exercising caution and consulting with Calvin’s administration before publishing scholarship or acting in ways that could be perceived as contradictory to the CRC’s stance on human sexuality.

In its treatment of the intersection between public and private life, HCL 3 reads, “For faculty and staff with high public visibility connected to the college, it would be in the interests of wisdom and high-trust communication to consult with the provost, divisional vice president, or president before engaging in conduct that may cause public controversy.”

Kuilema consulted with his department chair and program director prior to officiating the marriage ceremony; however, the social work professor did not seek out his dean, the president or the provost.

According to the memo, Kuilema’s decision to officiate a same-sex marriage ceremony came as a surprise to Wolters-Fredlund who, as his dean, had seen him repeatedly check in to ensure his actions were in line with Calvin’s policies since he was reprimanded by the board in 2018.

Further complicating matters, Kuilema did seek the counsel of elders, his pastors and the chair of the church council at Sherman Street CRC, where he is an elder, before officiating at the Swedas’ wedding.

“While I do not believe these consultations met the high bar set for Calvin faculty working in controversial areas or the specific expectations set for Prof. Kuilema by the Board in 2018, it should be noted that in each of these consultations he was supported in his decision to officiate at the wedding,” Wolters-Fredlund wrote in the memo.

In conversations with Wolters-Fredlund after news came out that Kuilema had officiated a same-sex marriage, he told his dean that because of the strong conviction he felt on the matter, he would not have heeded her advice anyway had she advised him not to officiate, according to the memo.

As news spread about the decision not to reappoint Kuilema, dozens of faculty and staff came together to express concern and disagreement with the PSC’s decision. A total of eighty-eight faculty members signed a letter to the board of trustees calling Kuilema’s actions an act of civil disobedience and stating that “None of us wants to be part of a Calvin University that excludes the voice and spirit of someone like Dr. Kuilema. None of us want to be part of a university that doesn’t have room to welcome all students, including LGBTQ followers of Jesus who are answering the call of discipleship in ways that are affirmed by their CRC councils and congregations.”

The faculty letter, dated April 19, raises issues with both the way in which the PSC interpreted the policies and the spirit of the law, arguing that the university acted in place of the church and that the reappointment decision seems to contradict a Feb. 2 statement from the PSC to faculty which noted that “the church does not have a position on whether the state should provide for civil same-sex marriage” such as the one Kuilema officiated.

The letter also argues that Kuilema’s actions mirror the decisions of individual congregations to disregard the CRC’s stance on same-sex marriage. Congregations like Neland Avenue CRC, which appointed a deacon in a same-sex marriage in 2020, have yet to see any consequences for their actions.

As of Thursday morning, 30 staff members had signed a separate letter to the board, highlighting the effects of the PSC’s decision on employee fear and morale, as well as the implications for LGBTQ+ members of the Calvin community.

“Calvin presents itself as safe, but this decision clearly sends a contradictory message. We offer support groups, such as SAGA, and faculty and staff are encouraged to invest deeply in students’ lives. But that support, in Joe’s case, has resulted in denial of reappointment,” the staff letter states. “This retaliation places a double burden on those within our community who identify as LGTBQ+. How can they safely find allies when seeking support may put another person’s employment at risk?”

In addition to faculty and staff efforts, students have been petitioning for Kuilema to remain at Calvin since early April with the slogan “Keep Kuilema.” Social work majors, LGBTQ+ students, and other concerned members of the Calvin community have distributed dozens of stickers with the slogan and organized an online petition in support.

On April 19, a group of students chalked “Keep Kuilema” and other messages expressing their appreciation for the social work professor on the pavement outside the doors of the Prince Conference Center, where the board of trustees is expected to meet from April 20-22.

Though Kuilema has chosen to remain mostly silent around advocacy for his employment, he did bid farewell to his students on the evening of April 20.

At the end of a heartfelt email informing social work students of the decision, Kuilema wrote:

“I do ask that as future social workers, you engage this news with professionalism. Stick to the truth, avoid speculation. Maintain your own integrity.  Advocate for social justice. Remember that every person has inherent dignity and worth, even those we may vehemently disagree with. Remember the importance of human relationships, and serve and care for members of our community who are hurting because of this and a variety of other recent actions. Do the work.

It’s been an honor and a privilege to teach at Calvin, and despite this end, I have a deep and abiding love for this place and its mission. I look forward to seeing how each of you goes out from this place to think deeply and act justly. As for renewal, we will wait on the Lord, and be in good company with the psalmist and the prophets. All we can do is do the work.”

The faculty letter can be read in full here: Faculty Letter – Kuilema Reappointment