Shell-ter from the storm: Take a break with the Bunker Center turtles 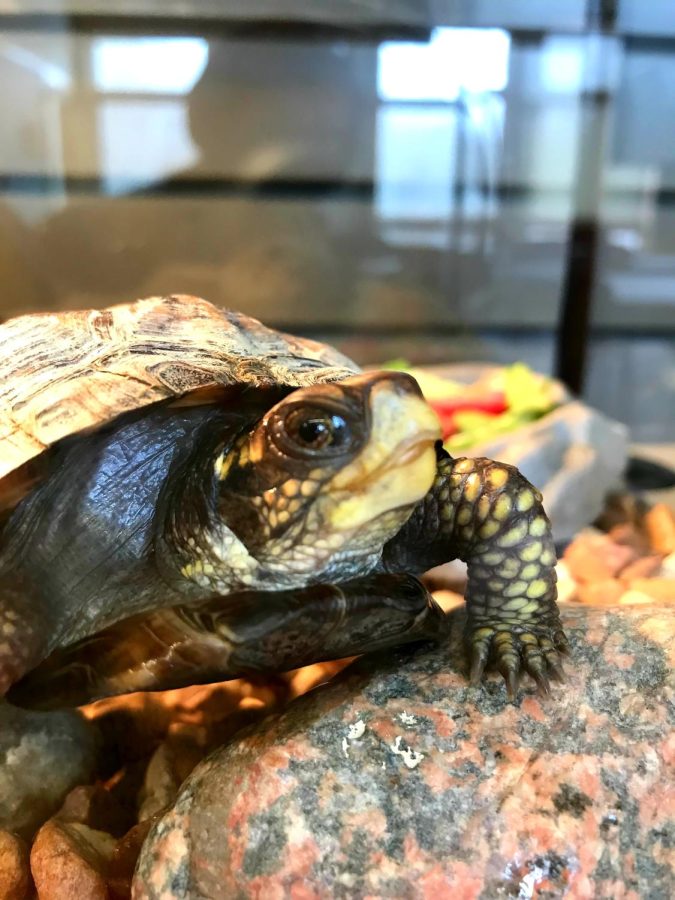 Across the Beltline is a chance to get away from the bustle and craziness of college while enjoying the quiet, pleasant environment of nature. Calvin’s ecosystem preserve is home to over 100 species of native plants and countless habitats. A vast number of turtles also call the nature preserve home; four permanently reside inside the Bunker Interpretive Center.

Sadie Laughlin, a senior majoring in neuropsychology, is the primary caretaker of the four turtles and has been for most of her college journey. “I always loved animals. I came to the summer camps Calvin had when I was a child and I was always checking in on the box turtles,” she said. When Laughlin was looking for an on-campus job, she knew the position would be a perfect fit.

Most of the turtles the center houses are native to Michigan. According to Nicole Larsen, a junior studying environmental health and conservation who is taking over Laughlin’s position next year, all the turtles at the center were brought to the center or found injured. “Lizzie the box turtle, who was brought to us with a deformed shell that we assume had been run over,” Laughlin said.

The one species that is not native is the red eared slider turtle, an invasive species in Michigan which cannot be released into the wild, according to Larsen. “We found him on the side of the road and think he’s probably a pet that someone abandoned,” Laughlin said.

The center also takes in baby snapping turtles when they hatch in the fall. “We collect the turtles when they hatch in the ecosystem preserve because they look like dead leaves so we don’t want people accidentally stepping on them,” said Laughlin. After a couple months, the center releases them, but will occasionally keep one on to measure their growth and development.

Laughlin said the turtles are important for teaching about animal care in a different way than cats and dogs. “Curtis is a good indicator of what effort is needed to take care of an animal his size. He’s about as big as a chihuahua,” she said.

Turtles are also a great way to get people involved and interested in wildlife. “No matter what age you are, you see a live animal, and you’re going to be drawn to it. The turtles add a good point of interest to bring in the public eye, as well as providing a good educational tool,” said Larsen.

According to Laughlin, turtles demonstrate the cyclical flow of nature. They are part of the food chain, both as predators and prey, and they help spread plant seeds through their digestive tract. “Turtles are a fundamental aspect of nature’s continuous flow,” she said.

Larsen said having the turtles creates an opportunity for people to get a close-up look at some of the wildlife in the preserve. “This hopefully encourages people to gain an appreciation for wildlife and the outdoors,” she said.