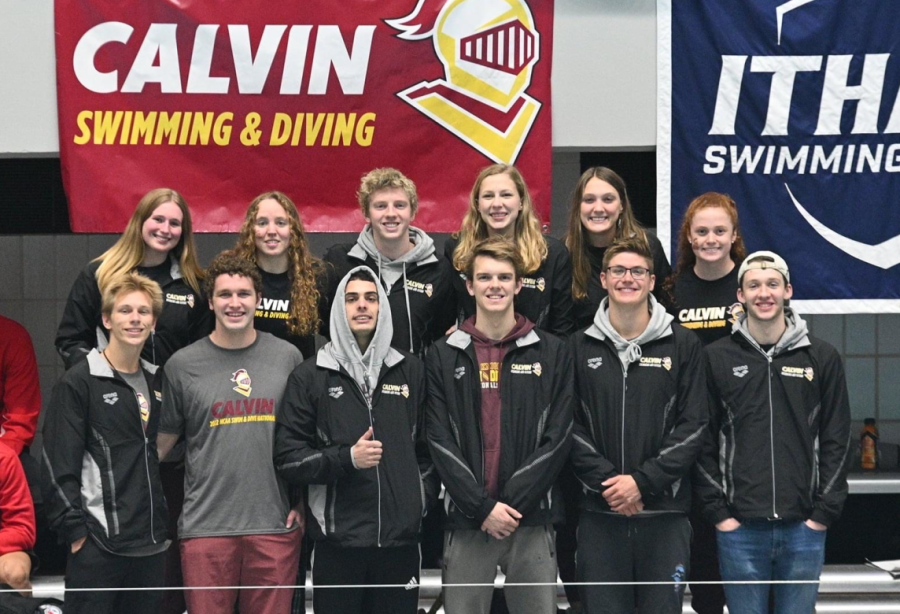 The swim team poses in front of a Calvin flag

Both of Calvin’s swim teams traveled to Indianapolis, Indiana, on March 16-19 to compete at the NCAA championships. They brought home several All-Americas and even a 12th place from the championships.

For the last 20 years, Calvin’s men’s swim team has only been able to join the ranks of the top 20 swim teams four times. This year, they proudly did it a fifth time, earning No.12 in the Championship. Meanwhile, the women’s team finished out a strong winter season by adding additional successes at the NCAA DIII Championships.

“Our team did everything we could to prepare for NCAA’s,” Haley Thier, a first-year student swimmer, said. “It was something we prepared for through our everyday training, with a goal to give our all and do our best for our team and represent one another at the highest level possible.” Thier considered “qualifying for NCAAs and being lucky enough to have to opportunity to represent our team and our school on a national level” one of the biggest accomplishments of the season.

“As a team, we spent spring break together here at Calvin and did lots of fun team bonding activities along with our training to prepare for the big meet,” sophomore and school record holder for the 100-meter butterfly, Margaret Farrell said about their preparation.

“Our preparation for Nationals was more technique focused than our training for some of our other meets,” said Valerie Edewaard, a senior on the swim team. Edewaard said one of the reasons for this was due to the team already being “in top training shape after being in season for the past 6 months.” Thanks to that, they were able to focus on “starts, streamlines and our catch.”

Calvin’s men’s team came away ranked No.12 out of 79 teams. One of the contributions to this includes senior swimmer Julian Iturbe placing sixth in his 100-meter freestyle. Another contributor was the 400 freestyle relay.

“Our men’s 400 free relay had a phenomenal swim in prelims, beating some super fast teams,” Edewaard said. “They were behind during the race but ended up winning their heat. They ended up finishing as All-Americans in that event.”

Jordan Bergsma, a sophomore, also pushed the team forward. He placed No.16 on the one-meter diving board and went into the finals. “We were all tense as he went up to do his final dive, and then he nailed it,” Edewaard recalled. “Our cheering was the loudest in the IUPUI natatorium as his score was announced.”

“On the women’s side, we had a really eventful 400 freestyle relay in prelims,” Edewaard said. The women’s 400-meter relay team was composed of junior Hannah Brown, Edewaard, Farrell and first-year student Sydney Sonday, placed No.21 out of all of the teams.
“The most memorable event of the meet was our last relay, the 400 freestyle relay,” Farrell said. “Watching our senior teammate Val anchor the relay and swim her last race as a Knight was so special, and we all couldn’t wait to hug her as soon as she finished.”

Thier also placed in the top 30 in her 200-meter breaststroke. She placed 24th with a time of 2:22.06.
Even though their season came to an end, Calvin’s women’s swim team left with good memories to reminisce on.

“Getting to go to NCAA’s again after not having gone since my freshmen year was a great experience and a cool way to end my swimming career. I am beyond thankful for the time I’ve gotten to spend with Calvin Swim and Dive and enjoyed every minute of it,” Edewaard said. She, along with the rest of the team, was excited to return to the NCAA since the last one was in 2019. “Only three of us had ever gone before, so it was fun to get to guide our younger athletes in what to expect and what to be focusing on.”

“The best memories from the season were either the electricity of the team during the MIAA relays, the long talks and days on the beach during training trip, our crazy fun room at conference, team dinners at knoll, or just any time spent around each other as a team both in and out of the pool,” Thier said. She said the most memorable moments from the championships include “cheering for one another as well as for the other members of teams in the MIAA who swam there as well.”

“The times we swim and places we get will be forgotten, but the moments we share together like these are priceless and the ones that will be with all of us,” Farrell said.