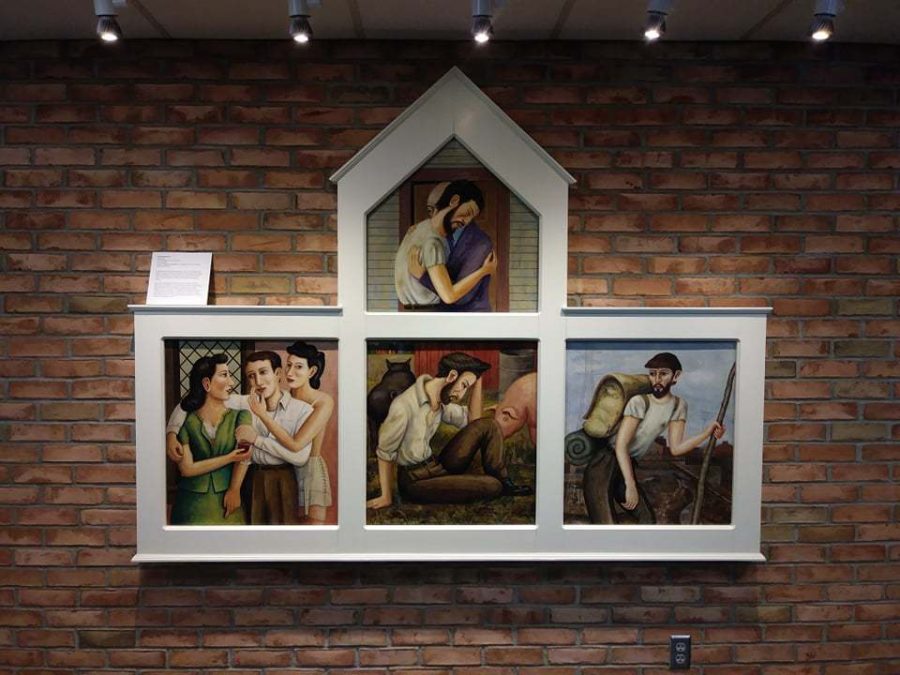 The "Prodigal Son" mural misportrays the narrative of the parable.

It’s easy to miss: on a not-quite-large-enough wall space behind a squat brick column in the library lobby is a series of paintings titled “Prodigal Son.” The scenes portrayed in the four paintings look a little different from the story you learned in Sunday school. The series’ frame takes the shape of an Early American home or altarpiece, and the characters appear as 19th-century figures, with the father in a navy suit and the son dressed in a starched white shirt which deteriorates as the story progresses and an urban, industrial backdrop to the son’s journey home. Rick Beerhorst’s style is an interesting mix of the Early American limner tradition and medieval iconography, and this combination works well to integrate the ancient story into an American context. However, there is a major problem with the series that doesn’t work in either the ancient story but is all too at home in the modern context in which it now sits: the passivity of the prodigal lets the viewer off the hook for their sins, as well as for their judgements about others’.

The bottom left panel, portraying the part of the story where the son wastes his inheritance on “wild living,” shows the prodigal son between two women who seem to be undressing. The female figures are the active ones in this image. One, mostly unclothed, reaches to stroke the son’s face. The other, who has opened her blouse to reveal her undergarment, hands him a glass of wine. The son, it seems, is in the midst of being seduced — a mostly passive recipient.

Whether we take the female figures literally as sexual seductresses or see them as symbols of the seductiveness of a sinful lifestyle more broadly, the problem remains: the story doesn’t work if the son is passive.

The son’s repentance as recorded in Luke is: “Father, I have sinned against heaven and against you,” not “Father, thank you for sending that famine to free me from the seduction of temptresses!” This is an error of interpretation that is made all too often in our culture. Shifting blame for sin — especially sins of “wild living” and especially when that shift exculpates male perpetrators — gets in the way of real repentance. It makes the prodigal son a story in which the son is rescued from the world.

Thinking of it this way removes the possibility of applying this story to anything in the present world because we are not rescued from the world by fleeing to God. And we shouldn’t want to be: we are in the world and so is God’s goodness. The real story is about God rescuing the son from the consequences of his own sin. In this version, the son is the one handing out wine and unbuttoning blouses. Only this version of the story — one in which the sinner acknowledges their sin as their own, and doesn’t seek to shift the blame — can include real repentance, redemption and reunion.

The prodigal isn’t the character in the story that most of us probably need to identify with most. The father’s other son — the one who has never strayed and always behaves well (at least externally) — is livid when the prodigal gets a huge welcome-home party.

It’s easy to picture ourselves as the passive prodigal, accosted by the temptations of a sinful world — that is, as the hero who inevitably overcomes temptation and is embraced by the father. But that’s not the biblical story and it’s not our story. We are not just surrounded by sin; we are part of the sin. We aren’t handed it; we reach for it. We are not the hero. It’s much harder to picture ourselves as the other son — the one who bitterly resents his redeemed brother and has to be reprimanded for not celebrating with his father.

How would the world change if Christians paid as much attention to the reprimanding of the “good” son as we do to the welcome of the “bad” son? How would it change if we stopped thinking of ourselves as better than the world, stopped blaming the world for our sins and took responsibility for them?