Love legacies: For some, meeting a spouse at Calvin is family tradition 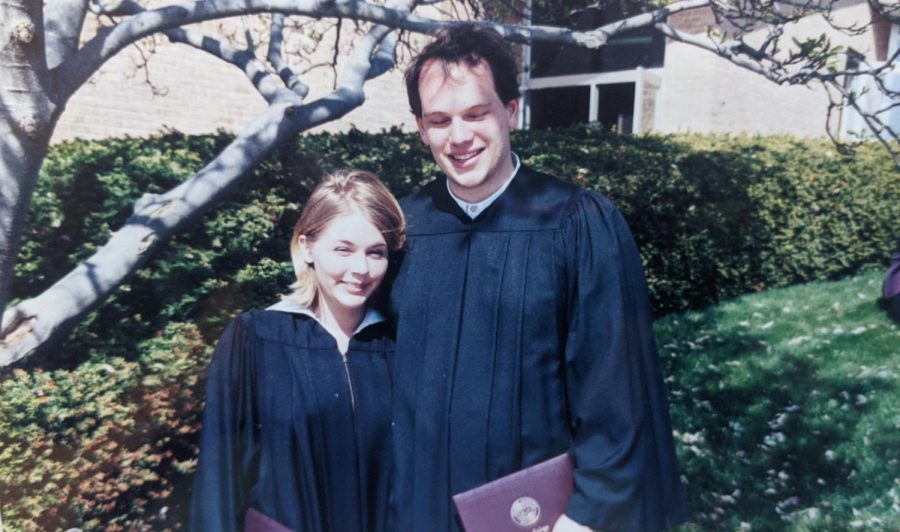 Marc Stonehouse stayed on an extra year to add a minor in environmental studies to his degree. He and Kari were married less than a month after they graduated from Calvin. Photo courtesy Kari Stonehouse.

From a Calvin walk to a ring by spring, Calvin is home to the start of many love stories. Whether it’s all part of a grander plan to increase enrollment is up for speculation, but one thing is certain: Calvin couples give birth to legacy students. Sometimes the cycle repeats for generations.

In honor of Valentine’s Day, Chimes met with Calvin alumni who met their spouses at Calvin and inspired their children — and some even their grandchildren — to do the same.

Marc Stonehouse, Calvin class of 1995, recalled his future wife, Kari Stonehouse, singing in a performance at the Calvin Students Radioactive Donemus, an event that allowed students to showcase their talents.

During Marc Stonehouse’s junior year, he and Kari Stonehouse were in similar social circles. She was a year below him and had romantic interests but he didn’t reciprocate her feelings due to his focus on school. But on the night of the performance, everything changed.

“She was singing songs about liking someone which she had written and sitting there, I realized it was me,” Marc Stonehouse said. “One of her songs had the line ‘with pools of melted carnations left over from cursed Valentine’s Day’ because the show was a few days after the holiday and she hates carnations.”

Marc Stonehouse described a dramatic switch being flipped inside him as he saw Kari Stonehouse in a whole new light through her music. After a long time of not reciprocating, Marc Stonehouse thought he lost his chance with her “Kari [Stonehouse] always remembers me hitting my head in regret against the wall after the show,” he said. “I thought it was too late but I guess it wasn’t; she was still interested so from then on we started dating.”

As Marc Stonehouse described his Calvin love story, his eyes lit up. “I’m not usually an open, touchy-feely guy,” he said. Marc Stonehouse told Chimes he and his wife are two very different people but she is the balance he needs; she makes him better.

“I was the engineer and Kari was the artsy German literature major and music minor. We’re opposite but together it’s a completion,” Marc Stonehouse told Chimes. “I’m the type of person that will bury my head in the sand, but Kari makes me look up and enjoy life.”

“Love is not a feeling, it’s a choice,” he said. “It’s staying together and making it work no matter what; you work to fix what’s wrong. It’s your responsibility to keep that feeling of love.”

A Calvin legacy: Glen and Joyce Walstra, class of 1967

Just as music played an important role in the Stonehouse’s story, it also aided Glen Walstra in asking his future wife, Joyce Walstra, out on a date. Both were members of the 1967 class, the second to live in the Knollcrest campus dorms.

“A bunch of us guys carried a piano over from the basement of what was at the time the boys dorm (now NVW) to the girls dorm (now BV) which we got in a lot of trouble for,” Glen Walstra said. “We set the piano down in the grass and serenaded the girls through the window. I asked Joyce [Walstra] out after that.”

The two became close friends in their freshman year but began their college careers in relationships with other people. They ended their other relationships after getting to know each other and decided to give each other a chance in dating. “We communicated throughout the summer after freshman year and knew the following fall we would be together,” Joyce Walstra said. The two dated throughout college and married in June after they graduated.

Glen and Joyce Walstra both grew up in communities with families who shared similar values, morals and beliefs. “We’re very different, but we’re very compatible,” Joyce Walstra said. Their differences strengthen their bonds, allow them to help each other and to share things they both enjoy. Joyce Walstra prefers to curl up with a good book whereas Glen Walstra is more outgoing and enjoys creating memories through experiences instead of reading.

Calvin brought them together and became a legacy in the Walstra family.

They recall a time when their son, Eric Walstra, turned 12 and they took him out for a birthday dinner. “At the restaurant, we ran into our old classmates Bob and Ruth Bush who were out celebrating their daughter’s birthday. Our kids were only six days apart,” Joyce Walstra said. Beforehand, the two couples had lost track of each other but after that, their children went to the same high school. Eric Walstra, class of 1993, started dating his wife at 16. Now, their son — Glen and Joyce Walstra’s grandson —, Matthew Walstra, is a sophomore at Calvin studying electrical engineering.

For other couples, their Calvin experience serves as the place where they met each other, but not when most of their dating relationship occurred. This was the case for Lisa and Dan Van Zoest, class of 1991 and 1993 respectively. Their children both go to Calvin: Will, a junior studying social work and Rebekah Van Zoest, a senior studying speech pathology.

A transfer student from Iowa, Lisa Van Zoest only spent two years at Calvin. “I met Dan in the lunchline at Commons, my roommate introduced us,” Lisa Van Zoest told Chimes. “We both lived in the same KE apartment, Epsilon, so we would run into each other in the stairwells and talk.”

These interactions lasted until the end of her senior year. They ran into each other again in the stairwell just before she graduated and Dan Van Zoest asked her out on a date, which they spent playing racquetball.

However, because Lisa Van Zoest was starting a career and Dan Van Zoest was still in school, they seemed to be going in opposite directions. As a result, they decided to end their relationship.

Yet, there are more stairwells to this story. Their paths crossed again in the stairwell of Hekman Library. Dan Van Zoest was eager to pursue a relationship, but the timing was still not right for them. They had a close friendship for about a year before deciding to pursue a romantic relationship with each other.

Dan Van Zoest took Lisa Van Zoest on a blindfolded adventure in January 1996, when the weather was sub-zero and snow covered everything in sight. He drove her to Calvin’s nature preserve after buying her roses and driving her in “what seemed like circles,” according to Lisa Van Zoest. When she removed her blindfold, Dan Van Zoest was on one knee. He had carved “Dan Loves Lisa” in the tree next to her.

“Our wedding was a few months later in Calvin’s seminary chapel and reception dinner in the Undercroft. Everything in our story happened at Calvin, beginning to end,” Lisa Van Zoest said.

Lisa Van Zoest recalled her gratefulness for establishing a strong connection with her husband before deciding to date. “It was really good to build that friendship with each other before having a romantic relationship,” she said. “We got to know each other and learned we have a lot of similarities, good conversations, and value a lot of the same things.”

Calvin not only brought these couples together, but it is now a place for their children and grandchildren to find a similar community, and perhaps a spouse. “I told my kids growing up that the people you become friends with and most likely the person you end up marrying would be someone you meet at college,” Marc Stonehouse said. “And it would be great if it was from a place like Calvin because there’s a certain connection and common way of thinking [in this community].”

And whether the connections happen at a talent showcase on Valentine’s Day, through encounters on stairwells, or by carved letters on tree trunks, Calvin has many more stories to tell.