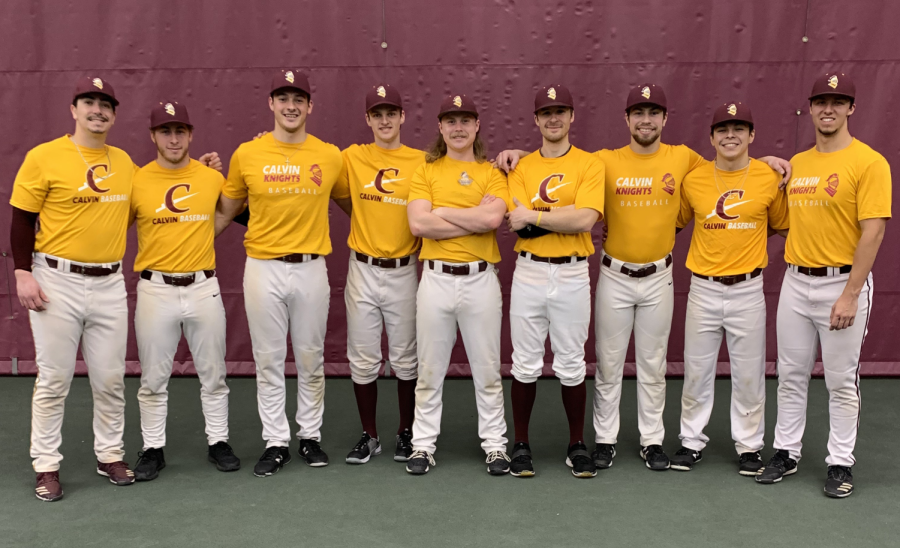 Calvin's baseball team will play outdoors for the first time this year at a tournament in Florida.

After two years of limited travel due to COVID restrictions, Calvin’s baseball team will open the 2022 spring season with a spring break trip to compete against NCAA Division III teams from across the country at the RussMatt Central Florida Invitational in Orlando.

The trip has been a couple of years in the planning, according to head coach Kevin Van Duyn. “It’s a lot of planning but at the same time it’s just a really great opportunity for us just to be around each other and have baseball,” he said.

“Starting off the season with nine games is going to be physically daunting, but my teammates and I are ready to play,” said sophomore infielder Nathanial Mason.

“This trip adds a whole different level of excitement for the team,” according to junior outfielder Carson Warners. “We are used to playing our first few games in sub-40-degree temperatures with high winds and a chance of snow. This trip gives us an opportunity to start playing games without weather being a huge factor.”

Going south to play means competing against teams who have already had several weeks of training outside. Calvin won’t have that luxury. “Baseball in the north, you have to be really, really creative,” said Van Duyn. The team has been practicing indoors at Calvin’s Tennis and Track Center three days a week, as well as at Diamonds Sports Training Academy and Elite Baseball and Softball Training Center, both in Wyoming.

“Our whole team has been grinding all fall and winter to prepare for the long season in the spring,” senior infielder Andrew Hung told Chimes. He gave credit to the team’s strength coach, Aric Ramos, and the six-day-a-week practices that have prepared the team for Florida.

“Our coaching staff has done a very good job at preparing us for this experience and getting us mentally and physically prepared,” said junior catcher Dylan Williams.

Traveling, which has been severely limited for the last two years, will give the team a chance to see how they hold up against teams from outside their conference. “Sometimes it gets kind of ‘boring’ facing the same teams every year, so facing new teams that we have never seen is an exciting challenge,” said Hung.

Coach Van Duyn told Chimes he seeks to encourage a “genuine happiness for others’ success” in his players. The Florida trip is a chance to spread the success around, as the fast pace and density of the tournament will mean each of the 36 team members gets a chance to contribute. “When you play nine games in nine days, you need every single player,” Van Duyn said.

“During a normal week of baseball, it is normal for only a select few players to play; however, that simply won’t be possible with the amount of baseball that we are going to play,” junior pitcher Calvin Miller said. “The most important thing that we have done to prepare is stress that we need every single player to be prepared to go out and compete when their number is called regardless of their grade.”

Sophomore pitcher Brayden Schoonbeck is one underclassman prepared to do his part: “My goal on the trip is to establish some good innings on the mound,” he said. “Whether starting or relieving I intend to make an impact this year as an underclassman on the mound.”

“Regardless of what the weather is, which players are on the field, or which state we are in, we expect everyone to give their absolute best effort,” said Miller.

“We want to win every single game down in Florida,” said Hung. “Winning these games will give us the momentum we need as we move closer to our home opener.” Senior outfielder Jeff Erickson is hoping to capitalize on that momentum in the regular season: “The team that is going to win the conference this year isn’t necessarily going to be the best team in the conference, I think it’s going to be the team with the most momentum.”

The trip is a chance to gain game experience in a low-stakes environment before the regular season starts. “This is going to be crucial for us because it allows us to make mistakes and to enjoy the game we all love without the pressure of a conference series,” Warners said.

“Our goals for the trip are to get a lot of playing time for our whole team and get our winning streak started,” said senior pitcher Eli Johnson. “We will play some good competition while we are there and it’s important for our team to learn how we play together and how the team holds up in tight situations and close games.”

It’s also a chance to bond as a team. “We want to go to Florida with the attitude that we’re going to beat every team we play, playing free and with confidence that we can carry into the rest of the season,” said senior outfielder Ryan Petersen. “Also continuing to strengthen our relationships, this will help build that confidence and trust in one another to get the job done no matter what situation arises in the season.”

The whole team is excited to travel and be free to play the sport the way it was meant to be played: in warm weather and with friends. “The most exciting thing is just to wrap up my last season with my best friends and enjoy every part of it,” said Erickson.