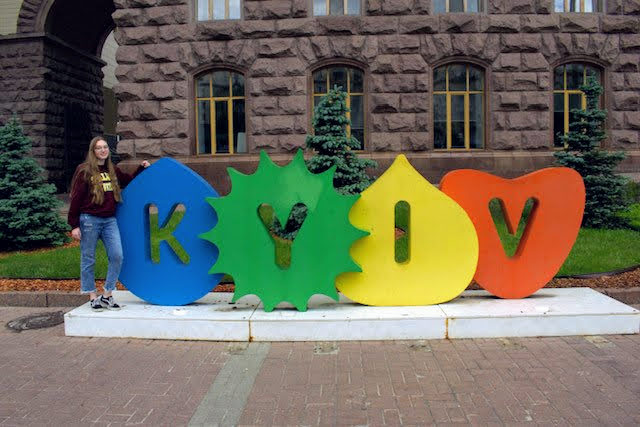 Abigail De Vuyst in her hometown of Kyiv, Ukraine.

Kyle Borror, a Calvin missionary kid who primarily grew up in Ecuador and Lesotho, described the term “third-culture kid” as “you have the culture that you’re living in overseas and then you have a culture of your parents.” These two cultures combine “to make your unique third culture … It’s your culture because you don’t fit in either one necessarily.” Furthermore, “you could be a fourth or fifth culture kid, depending on how many different countries you’ve lived in.” Having lived in Costa Rica, Ecuador and Lesotho, Borror described himself as a “fifth-culture kid.”

Unlike other missionary kids who grew up overseas, Priscilla Chang, a first-year student studying literature, chose to leave her home in California to move to Chiang Rai, Thailand, in 2017 with her family. There, her parents primarily work with the youth of the Akha people who live in the mountains bordering Thailand, China and Myanmar. Chang said she “was actually one of the only MKs I knew that was given the choice of whether or not I wanted to go.”

Since moving overseas would completely uproot the life she knew, she questioned at a young age, “Do I believe in this enough to literally give up my life for this? … If I really didn’t believe in this, then so much of my time and my energy would have been wasted.”

Though being in Thailand was not without its challenges and Chang acknowledges many MKs she knows struggle with their faith, she said she can see how much God continues to shape her faith through her experience there. “I have seen so much, especially in Thailand, that proves you know God exists and He is a part of my life and He cares for me. I think it was that leap of faith that I needed to finally kind of open my eyes and see the world in a way that God wanted me to see it.”

Borror, a sophomore studying mechanical engineering, likewise attributes his faith and perspective to his experiences as an MK. It was easy to take Christianity for granted while living overseas in Ecuador and Lesotho, Borror told Chimes. It wasn’t until he attended public school when his family moved to Idaho halfway through his sophomore year that he was presented with opportunities “to profess [his] faith or just interact with kids who are really different from [him].”

Nuri Lee, a junior studying strategic communications and media, grew up primarily in Sudan, Egypt, Kenya and Chad and is fluent in three languages: Arabic, Korean and English. “As I was born into a Christian family, especially as a missionary family, there was definitely a lot of pressure and [an] unspoken rule is that you have to be a good Christian as a missionary kid,” Lee said of his faith formation. Though he struggled with his faith when he first came to Calvin, Lee said talking to the pastor at Korean Grace Christian Reformed Church in Grand Rapids and questioning how he knows why Christianity is true has helped him “to form a relationship … with myself and God.”

Lauren Holwerda, a fourth-year nursing student, grew up in the Philippines for the first seven years of her life. Though she acknowledges that her time overseas may seem short compared to other MKs, she said the first seven to nine years of a person’s life are the most formative, and those years “had such a huge impact on my worldview.” “From the moment I was born, up until now, my family has been so active in conversations about faith.” Holwerda put her faith in Christ as a five-year old, “not just because like, oh, that’s what you do, but [because] my whole family does this and this is attractive [and] something that’s interesting.”

Today, as a resident assistant on 3rd Kalsbeek, she sees her floor as her mission field. “One phrase sometimes I have in my head is when I open my door in my dorm, I walk into the hallway and that’s my ministry.”

Abigail De Vuyst lived her whole life in Ukraine before coming to Calvin as a first-year student studying secondary education last fall. According to De Vuyst, the variety of churches in Grand Rapids and Calvin’s chapel services are a far cry from the church she attended in Kyiv. Growing up with worship in Hungarian and Russian, De Vuyst said: “It’s always super emotional for me when I first come to the [United] States, and I go to a church in English and it’s in a church building and everything has like a theme and a flow. It’s always really emotional because it’s so different and it is in my own language.”

To Chang, the worship style at Calvin is very different from the energetic style she was used to in Thailand. Before coming to Calvin, Chang had never sung hymns. She told Chimes that it was very unusual to her that in Grand Rapids, people rarely raise their hands in worship, because in California, where she grew up, “and in Thailand, everybody raises their hands.”

Borror was accustomed to energetic African worship, especially at River Valley Academy, his international school in Kenya. “A lot of the time during worship they turn up the volume to full. [Everyone is] clapping, dancing out in the aisles, not to where it felt like a party, but to where they felt like they weren’t holding back their joy.” Friday chapels are most reminiscent to him of the worship he experienced. International chapels are also familiar for Borror, who is used to worship in multiple languages.

Though there are parts of chapel and life in the U.S. that may feel familiar, culture shock can be very real. De Vuyst says that it can be hard to relate to others since, “I look and sound American … they will just [think] that I’m going to understand certain cultural cues and stuff for America that I don’t understand.”

Growing up in an international school with classmates that were continually coming and going, De Vuyst says that “you make friends quickly and very deep” which contrasts sharply with America, where a lot of the time “people make friends more slowly.”

Having attended public high school in Idaho, Borror can relate because sometimes it is easier to let others believe what they want to about him; classmates who had never been out of Idaho found it hard to relate to him, so he learned to “keep all the extraneous things [contained] in a box.”

Moving to Thailand in her early teens, Chang was surprised by how people there were much more laid back. “Everyone gets places 20 minutes late.” Furthermore, her classmates at the international school she attended were from all over Asia and Europe, a change to her previous experience living in primarily Asian-American communities in the suburbs of Los Angeles. Coming to Grand Rapids, she was once again surprised, especially since she had “never seen snow before.”

When asked where home is, De Vuyst confidently stated that for her, it’s Ukraine. However, for other MKs like Borror and Lee, the answer isn’t as clear. Borror explained that as his family is currently in Nampa, ID, that is where he considers home. “You take on more of those cultures, but you also feel a lot less attached to any singular culture,” Borror said of having lived in multiple cultures. For Lee, home is “really the place where I sleep for the night.”

Chang and Holwerda feel conflicted about one place to call home. For Holwerda, Grand Rapids and the Philippines are both home. For Chang, California is home because that is where she grew up, but she called Thailand “a secondary home” as that is where her family is.

In her experience as an MK who continually moved as a child, Holwerda said the constant change “points [her] back to Jesus and [how] this is not our home, like [how] the Son of Man has no place to lay His head.”