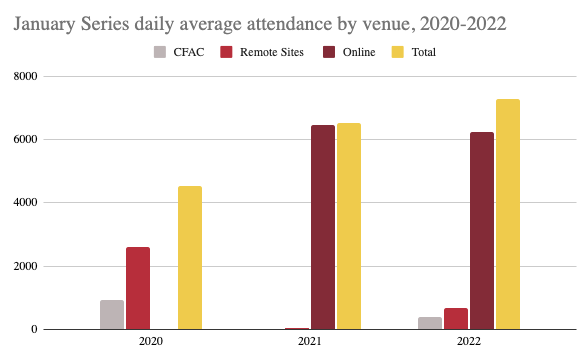 Viewership has risen thanks to a combination of remote and in person viewers.

At the conclusion of the January Series on Jan. 28, Director Kristi Potter announced that the series would reach a total of more than 100,000 viewers by the evening.

Despite a daily on-campus attendance average lower than 2020, this year’s January Series boasted an all-time high of 7,292 daily average viewers. This was thanks to a combination of on-campus attendees, those who joined in designated remote viewing sites, who watched the live video and who used the on-demand online option.

Though the majority of speakers spoke on the stage of the CFAC auditorium, some presented virtually. Beth Silvers, who presented with Sarah Steward Holland, joined their presentation virtually due to a positive COVID test while Steward Holland spoke in person. Due to travel restrictions, theologian N.T. Wright presented live from his office in the UK. The majority of viewers tuned in virtually, although the CFAC auditorium was open on each day of the Series to students and the public.

The hybrid model brought in a daily average of 395 in-person attendees, with an average 6,232 additional viewers participating online.

The in-person average marks a significant decrease from 2020’s average of 927 attendees. This year’s online average, however, is only slightly lower than 2021’s average of 6,453, when in-person attendance was not an option. Attendance at remote sites was considerably lower this year than in 2020, declining from a daily average of 2,600 to 665. Compared to 2021, viewers took advantage of the live video more frequently this year, with fewer viewers using the on-demand video.

In print, this story incorrectly stated that the anticipated viewer total was 1,000,000. The story has been updated to reflect the correct anticipated total of 100,000. Chimes regrets this error.