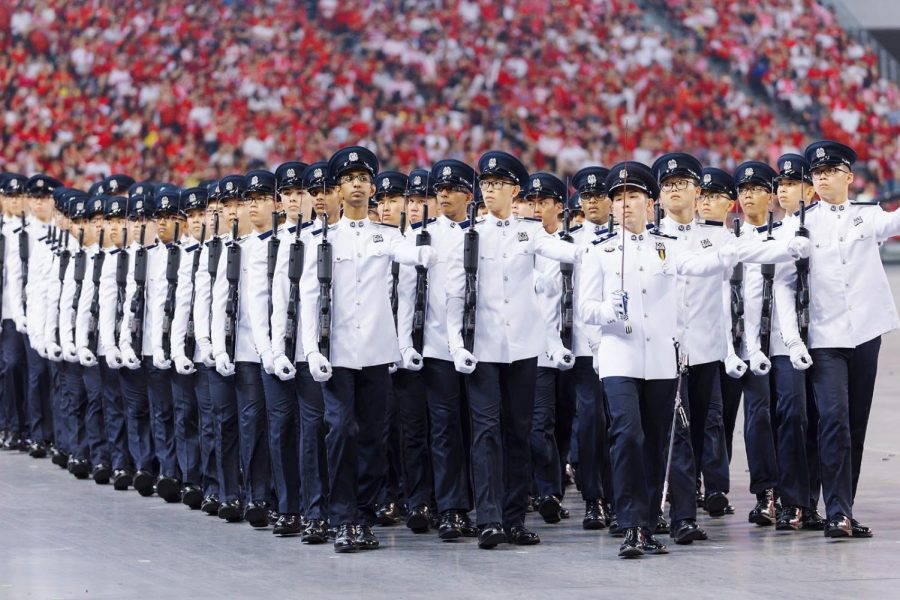 Kwik, pictured in the front row, second from the left, marching in the National Day parade in Singapore. As an 18-year old, he was commissioned as the police equivalent of first liutenant.

Personal responsibility, daily routine, stress, a long list of tasks to be completed – for the Calvin students who have completed mandatory service in foreign militaries, these features of life remained largely the same as in their college experiences. Other things, like the freedom to explore and make your own decisions, disappeared.

“You’re told you are no longer civilians, instead you are civil servants, and you’re completely stripped of your rights.” This is how Daniel Kwik, a senior from Singapore, described serving in his country’s military.

Kwik, a double major in data science and marketing, lived in Singapore his whole life and was required to complete two years of compulsory service.

Kwik described it as a rite of passage and a defining moment of his own life. “It’s something I was pretty excited for, but it’s a different way of living,” he said. “Training breaks you down and builds you back up as a soldier, it’s very intense. Identity is a huge aspect of it.”

Military training breeds uniformity, regardless of status or background. Everyone goes through similar training, has the same haircut, the same clothes; it’s the “great equalizer” as Kwik called it.

Kwik is one of several international students to have their lives influenced by conscription. Several of these students were forced into service based on mandatory military service acts.

In the United States, service is primarily optional with the exception of registering for the draft. However, many countries around the world including South Korea, Singapore and Brazil have conscription laws. Men of certain ages are required to enlist in the armed forces for a time period that varies by country, typically one to two years, but ranges from four months in Denmark to 38 months in Bermuda. Often, such laws offer an age window in which citizens must complete their service, giving them some say in the matter.

Conscription is a controversial issue because of its interfer- ence with young peoples’ education and the idea that it could compromise military quality. Countries that implement such policies see it as advantageous because it guarantees a ready supply of service members and promotes unity and citizen involvement in government. However, many countries have moved away from this type of service to a volunteer-based system like that of the U.S.

Brazil is one of the few countries that allows for exceptions to its military service requirements. All men are required to enlist to keep their citizenship, vote and keep their passport active. However, after enlisting it’s possible to apply for discharge.

Rodrick DeOliveira is a first-year student from Brazil studying public health and Spanish. He says there are two conditions to apply for discharge. “If you’ve lived outside of Brazil for a certain amount of time and if you’re going to col- lege you can apply for an exemption,” he told Chimes. “They usually give it to you, but it’s much harder, if not impossible, to do that in other countries.” DeOliveira is currently in the process of seeking an exemption which would allow him to stay and finish his degree at Calvin.

Kwik, who knew his service would eventually come, chose to complete his time before starting at Calvin. Starting out as a recruit, Kwik transferred to the police force after basic military training. He was eventually commissioned as an inspector – the police equivalent of a first lieutenant.

“It was crazy that the government put so much responsi- bility on an 18-year-old,” he said. “I was given a rank that’s higher than others who have been there for 20 or 30 years. It’s a challenge to know your place, that you’re young and new and yet still learn to command that respect.”

In Kwik’s last year of service, he was given an opportunity to lead the manpower division for the public transport security command of the Singapore police force. This division guards all the public railway and bus systems.

“I chose to do the military to be near my family,” he said. “If I just left for college, I didn’t know when I would come back so I wanted to spend more time with my relatives.”

Due to long periods of time at sea, Balaraju was allowed to go home pretty often throughout his two-year service in the Singapore navy. He lived with his grandmother in Singapore during his time off because his parents are mis- sionaries in India along with his three sisters. “It was hard with them being so far away, but I was allowed to call them often,” Balaraju said. “I also traveled to see them when I got extended holiday periods.”

In contrast, other students chose to start their college journey before completing their service.

Junior Kun Kang, studying computer science, returned to Calvin this fall after having been gone for 18 months. Originally from South Korea, Kang grew up in Africa with missionary parents. He was stationed at a special deployment base in South Korea where he worked to prevent illegal immigration. His job required frequent training and moving around the country.

Kang came to Calvin knowing he would eventually need to go into the service but wanted to experience college first. “I came into Calvin as an engineering major and changed to computer science my sophomore year and I loved it,” he said. “It was easier to leave because I knew what I wanted to do when I came back.”

According to Kung, leaving after his sophomore year was a good idea. “If you go after junior year, it’s too long of a break from your 300-level courses,” Kung said.

The COVID-19 pandemic started a whole new level of stress and change in militaries around the world. The former service members at Calvin recounted canceled missions, delayed training, and revoked vacation days. Masks were required in certain areas if not everywhere. “It was a little awkward when I first got out because last time I saw everyone, no one was wearing masks and then when I came back, everyone was,” Kang said.

Returning to college or arriving at Calvin for the first time after their experiences was a huge culture shock from what these students had encountered in their nations’ militaries. In the navy, Balaraju remembered feeling disconnected to the “normal” world. The sailors went out on the water throughout the day conducting different operations, sometimes for long periods of time. “Coming to college after that was hard in the beginning,” he said. “I was mostly learning how to get back into the social circle, different social cues and how to talk to others. It’s a different kind of stress from the strict discipline and rules I was used to.”

The transition back to civilian life meant breaking away from strict regimentation while maintaining a sense of diligence. According to Kwik, it was hard just to switch back to talking regularly. Military norms such as formal words and titles were no longer present on a college campus.

These students also have to adjust to the fact that they’re older than most of their peers who cannot relate to what they experienced. Those who left during the middle of their college journey came back and joined a different class, most of their friends graduated and gone. “It’s definitely a struggle but it’s exciting to be back,” Kang said. “I had a mentor to help, and some of my friends are still on campus just as upperclassmen.”

Balaraju calls it an advantage because he’s already gone through the process of figuring out what he wants to do before even coming here. “I had plenty of time to think; you’re not as confused about your path and it helped me mature a lot in my mind.”