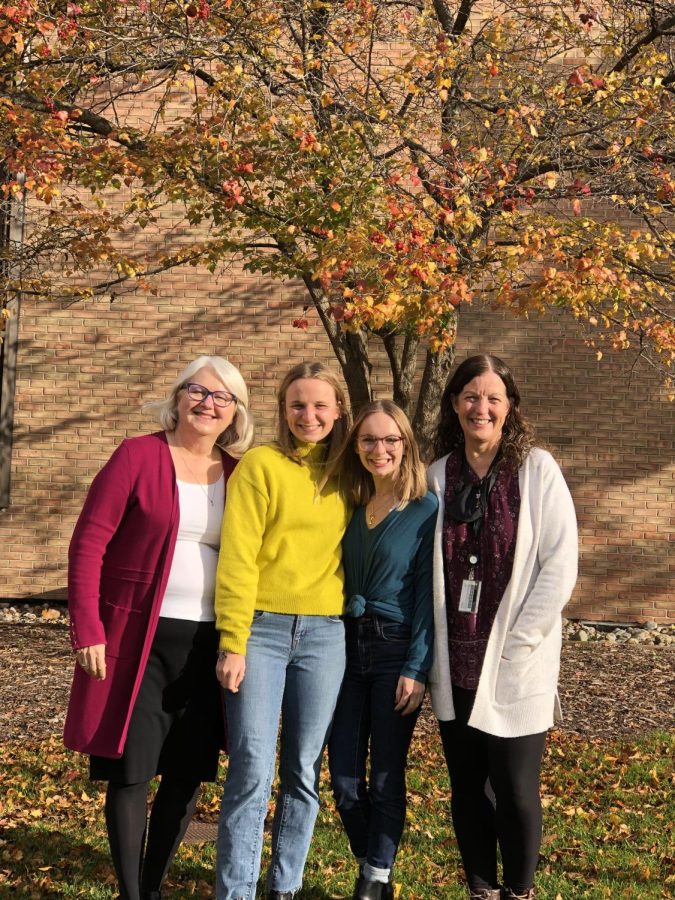 Datasha Merritt was working as a human resource manager when her life turned around: she was diagnosed with a sudden brain disease that required two brain surgeries. Unable to work due to the repercussions of the surgery, she also began battling depression. That was when her grandmother invited her to attend her first Women Supporting Women group at their local church.

That day helped Merritt finally see and understand her mental illness as she did with her physical illnesses. Merritt attended a WSW group for the first time in 2018 and has now taken a leadership role in the program.

WSW is a research program founded in 2010 by nursing professor Mary Molewyk-Doornbos and associate professor of nursing and Partnership Community Coordinator Gail Zandee. The research-based program consists of focus groups to teach about mental health resources in Burton Heights, Baxter/Madison and Creston/Belknap — three of the four neighborhoods Calvin partners with for its community-based clinical program in the nursing department.

WSW stemmed from this partnership-based approach that Calvin has had with these three neighborhoods since 2001. “Part of my role was to really listen well to residents, what residents think their top health concerns are, what they think their solutions are, and then match them with the nursing student learning experiences,” Zandee said. This approach is called “community-based participatory research,” according to Zandee. “It’s really about giving power to residents to identify their concerns and their solutions to those concerns,” she said.

In order to form their community health plan, Zandee conducted a community assessment in each one of those neighborhoods through focus groups and door-to-door surveys. She and her team then presented those results back to residents and asked them to share, from their perspective, what they thought were the top health concerns for their neighborhoods. Through that, Zandee found a pattern: “Depression and anxiety came up as one of the top health concerns in each one of those neighborhoods,” she said. Given the results, Zandee, experienced in public health, invited Professor Molewyk-Doornbos, whose expertise is in mental health nursing, to help gather the manpower and resources needed.

“I pulled my colleague together, and said, ‘Would you like to partner with me so we can dig deeper into depression and anxiety?’” Zandee said.

And off they went. They conducted six focus groups in total, in all three communities. In the Burton Heights neighborhood, known for its predominantly Hispanic population, they conducted one focus group in English and one in Spanish. Once focus groups were conducted, the research team transcribed the data and evaluated what common themes were present.

“Once we analyze the data, we go back and we share it with the women,” Molewyk-Doornbos said. Through the feedback the women gave, Molewyk-Doornbos and her team identified factors such as social determinants of health that influenced the women’s mental health in those neighborhoods. “We’re aware that where one lives and one’s poverty and housing and food insecurity kinds of issues, those things drive health outcomes, far more than any health care, nurses or other members of healthcare team are going to come by,” Molewyk-Doornbos said.

Molewyk-Doornbos and Zandee also made sure to ask the women who were part of the program what solutions they saw necessary. “A common theme that came up is women wanted a place where they could come together and get education and support around the topic of depression and anxiety,” Zandee said. “So that’s where Women Supporting Women was born; it was born from the women in our communities.”

Given this need, Molewyk-Doornbos and Zandee developed a model where nursing students, under the supervision of faculty, did the teaching based on a curriculum tailored for what mental health tools the women wanted to learn about.

“I always say to people that was our mandate: The women told us what they wanted to learn. And so I created a curriculum that did that specifically,” Molewyk-Doornbos said.

According to Molewyk-Doornbos, the curriculum includes: symptoms and causes of anxiety and depression, coping mechanisms through cognitive behavioral therapy, including positive affirmations, the use of art and breathing techniques. WSW also teaches about the use of medication for mental health.

The program has now been ongoing for over 10 years.

Woodrow did not know of WSW until her junior year, when Zandee, who was her advisor, invited her to join the team. She accepted the position of research assistant with hesitancy  at first, but shared that it has become the highlight of her Calvin experience.

Woodrow has been actively using her Spanish through her position for WSW. According to her, she is responsible for all the communication with the Spanish-speaking residents of the Burton Heights neighborhood. “I’m the only Spanish-speaking team member, so any communication that goes to a Spanish speaking client, that’s on me,” she said. She has also worked on translating materials that are sent out to participants as well as course material to accomodate for language differences.

“We approach health care in a very unique way, and I think using our nurses training in the world of research has the opportunity to really make a big difference,” Woodrow said.

Of WSW, Woodrow said, “It’s not just work, it’s not something we have to do; it’s a program that has been created out of love and out of concern for the community.”

“Women are really able to open up and share a lot in this space,” Bjelland said. “For many of them, it’s like their only space that they’re able to be open about anxiety and depression, especially because there’s just so much stigma around it. So I guess that’s one of my favorite things.”

Bjelland was also impacted by how many women who participated in the program wanted to use the tools they learned to instruct their neighbors and help them just like they had been helped.

This desire to give back was true of Merritt’s experience. After Merritt completed the WSW program, she decided to return as a Community Health Worker.

“These are individuals drawn from those communities employed by Calvin, who are helping with clinical experiences for nursing students to help understand cultural diversity and cultural sensitivity,” Molewyk-Doornbos said. “They’re going where we can’t go.”

Merritt was inspired to take on this role after the loss of a family member last year: Merritt’s cousin was one of the 38 victims of homicide in Grand Rapids in 2020. The tools she acquired through the program were essential as she was going through her own grieving process, according to Merritt. “The great way that Women Supporting Women has helped me is the more educated I became about mental health, the more I was able to help myself,” she said.

Merritt said that her role entails going out into the neighborhood once a week and serving residents by giving blood pressure checks, visiting nursing homes and providing resources to people. “So just to make sure that we’re serving the inner city community and getting the word out that this program is out there. Even if you don’t know how to go and get resources we will bring you information so that you have resources at your fingertips,” she said.

After years of research, the results show WSW works; this evidence-based supported program has, in fact, caused an effective decrease in the symptoms of depression and anxiety of its participants.

Now, Zandee and Molewyk-Doornbos have submitted a grant that would enable them to expand the program beyond women to local clinics in what is called “integrated care settings” where patients could have check-ups for both their physical and mental health. This would be a step in breaking the stigma, according to Molewyk-Doornbos.

Zandee told Chimes that health equity requires listening well with everybody at the table, “because you don’t want power dynamics to happen where someone from the outside is deciding what should be done and how it should be done,” she said.

“I feel like all the credit for this program goes to the women in these neighborhoods, because they’re the ones that have the idea. We just brought our strengths to the table as well,” Zandee said.