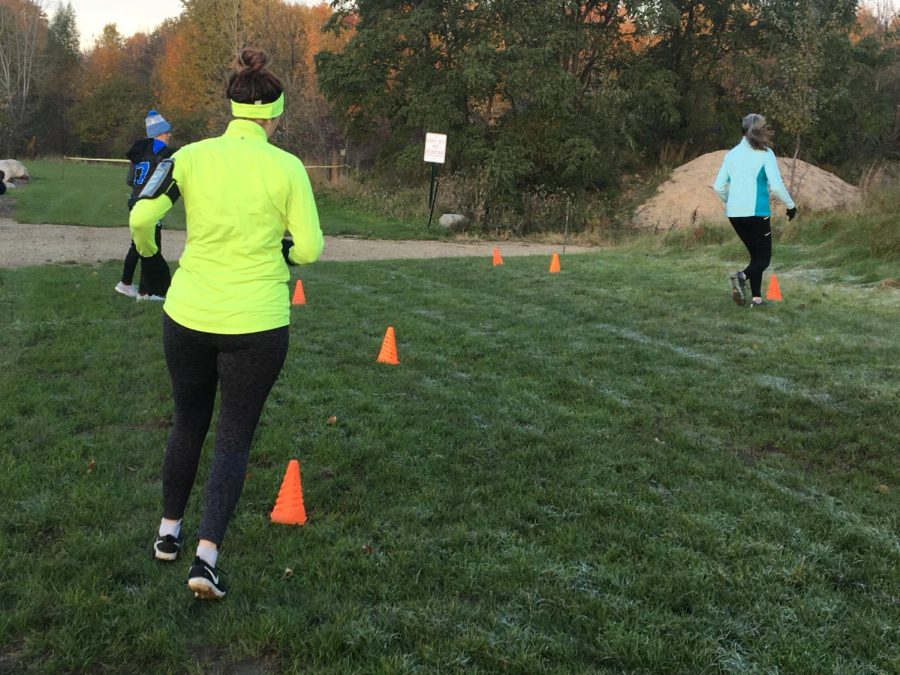 A race participant completes one of the football drills incorporated into the 5K on Saturday.

On Nov. 6, runners of all ages gathered on a chilly, sunny morning at Calvin’s Gainey Athletic Complex to participate in a 5K fundraiser for the Grand Rapids Tidal Waves, a local women’s football team.

Besides raising funds for the team, the goal of the 5K was to familiarize people with different types of football training. No knowledge of football was required beforehand. There were four different drills placed throughout the course. The first was a W-drill, which hones direction-changing skills by requiring individuals to run forward and backward from cone to cone. The second was a shuffle drill. This exercise helps athletes work on their left and right movements. An agility ladder to work on footwork and a punching bag tackle drill was the third challenge. The fourth and final drill occurred at the end of the race: the women’s football players stood shoulder-to-shoulder holding up pads and the participants ran through them.

The race was the brainchild of Elisha Marr, a Calvin professor and linebacker on the Tidal Waves team. She approached Rob Hyde, an assistant coach for the Calvin cross country team and RunGR, to put on this race. Marr and Hyde went to the same high school and both attended Calvin. The Tidal Waves had previously volunteered and fundraised at a race that Hyde had organized this past March: the Winter Wolf 5K at Prairie Wolf Park in Caledonia.

According to Marr, each player on the Tidal Waves has to pay $450 each season to cover the cost of equipment and game fees. The team organizes events and opportunities for players to earn some money to reduce that cost, such as selling raffle tickets and volunteering at the concession stands at Michigan State University.

“It’s sad to me that a woman’s professional football team has to serve pizza at the boys college football game in order for us to be able to play,” she said. “And you see all the things that they have — all the equipment, all the practice areas. We’re just hoping to make enough money so that we can actually play somewhere. It really shows the gender inequality.”

She hopes that they can continue this 5K in the future and get a few more participants each time. If they could get a hundred people in a few years, they could completely finance the playing expenses of three or four players.

“I just hope it’s something that we can keep growing every year and who knows, maybe some athletes or alumni get involved with the women’s football team because they either see this race or they hear about it,” Hyde said.

One of the race participants, Beth Ames, enjoyed the race and was enthusiastic about supporting its cause.

“I would definitely do this again,” Ames said. “We need to support women’s sports whenever we can.”

To stay up to date with the Tidal Waves, follow them on Instagram @grtidalwaves and to help finance the team as they gear up for their next season, visit https://tidalwavesfootball.com/sponsorship-opportunities/.