Planting sequoias: Calvin’s trees provide clues to the past, hope for the future 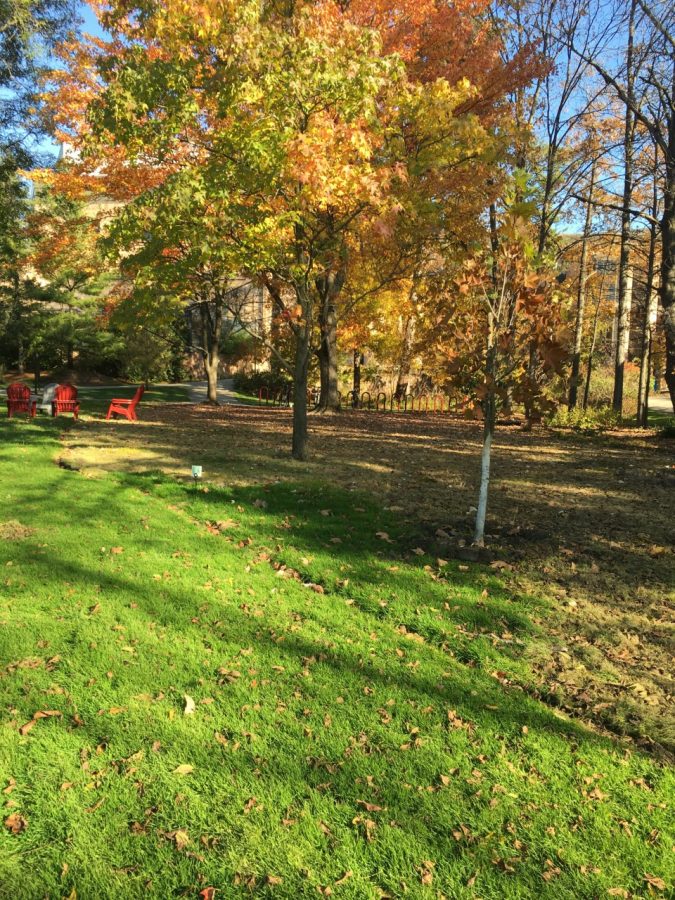 A new forested area, set aside and planted by the Plaster Creek Stewards in 2021, is growing behind the Spoelhof University Center. (Photo by Sarah Gibes)

When the oak stem pushes up from the steaminess of the forested ground, the foliage of the surrounding atmosphere covers its effervescent leaves. Fed by carbon flowing from fungal networks of its mother, the sapling stretches towards the sky, until its crown flowers so that it too can pull carbon from the air to build its trunk. For decades, as the forest around it capitulates to encroaching saws elbowing away the forest to make room for cornfields, the tree stretches its crown further out into the sky and pushes roots deeper into the earth. It seeps knowledge and nutrients through the soil to the plants that surround it.

Eventually, most of the trees around it fall before bulldozers building the grassy lawns and red-brick buildings of a college campus. Yet the great oak tree remains, fed by and feeding into the knowledge of the soil and the atmosphere.

Although Calvin isn’t a forest any longer, the trees that grace Calvin’s landscape, from centenarian oaks to baby sequoias, are remnants from the place’s past and the keys for the institution’s future.

Roots of the past

Many on-campus trees provide hints of what the ground Calvin currently stands on looked like before a student of Frank Lloyd Wright decided to cover the landscape with red brick buildings.

Some of the most obvious tree architecture comes from Calvin’s farm days. When Calvin’s land was part of the Knollcrest farm, trees were planted along fence lines. Most of Calvin’s fence line trees are Douglas firs, a large non-native West Coast fir tree. Today, these fence line trees are massive and form Calvin’s west boundary between parking lots 1-6 and the neighborhood adjacent to campus. Another remnant line of Douglas fir trees stretches along the west side of the Spoelhof University Center.

According to Warners, much of the campus was forested during its farm days. The nature preserve was one such space. Although cows grazed the forest shrubbery and people harvested wood from the forest, it wasn’t ever completely cleared. As a result, there are multiple trees in the preserve today that are between 150 and 200 years old.

Before Calvin became a university, the oldest tree on campus was a red oak right beside the Spoelhof University Center. When the Spoelhof College Center was built in the 1970s, the construction severed the three northern roots of the oak’s buttress root system. Rotten tissue slowly leaked through the rest of the tree until it fell over in a windstorm in the summer of 2019.

“It’s amazing that it took 50 years for that decay to work all the way through the tree,” Bob Speelman, supervisor of landscape operations and resident Calvin tree expert, said.

However, a few years before the tree fell, ground workers grew saplings from the tree’s acorns. Two of these saplings are currently on campus, one behind the Prince Conference Center, the other near the chapel, commemorating the work of recently retired provost Cheryl Branson.

Warners noted that the oldest tree on campus today is also an oak tree. It stands behind the field house, is taller than the surrounding trees and can be clearly seen from the north side of campus.

Besides providing shadows of Calvin’s land usage history, trees on campus also serve as memorials to important members of the Calvin community. According to Speelman, there are a total of 32 memorial trees on campus.

One of them is the sunset maple on the outside of DeWitt manor. The tree was selected to honor Queen Beatrice of the Netherlands, who visited Calvin in the 1970s. In the fall, its leaves turn bright orange, which is the color of the Netherlands.

Other trees memorialize students who have passed away during their time at Calvin. A tree outside of North Hall memorializes Olivia Haverkamp, who passed away in January 2020, during her first year at Calvin.

The shagbark hickory that stands outside the south side of DeVries Hall is a tree that was memorialized long after it was planted. It’s one of the older trees on campus, and is a favorite of many biology professors. When DeVries Hall was built, late biology professor John Bebej and Calvin’s facilities department worked hard to ensure that the tree would survive the trauma of having a large lab facility built right next to it.

“I remember drilling holes in the soil to keep it aerated, to ensure the survivability of the tree,” Speelman said. The facilities and biology departments monitored the tree, working to make sure the construction equipment didn’t compact the soil, giving the tree additional water and shielding it with a protective wall. Bebej watched the tree with extreme care, often going outside to guard it when construction workers or equipment got too close.

“Hickories don’t like to be distrubed, but that tree didn’t skip a beat,” Speelman said.

Today, the tree is still doing well. It stands in a protected, miniature forested area, and it’s multiplying: Underneath its leaves, there are even more Shagbark hickory seedlings growing.

“These are witness trees to show us what happened here,” Warners said. “They are the past, and it’s a good reminder for us, since people are so present-minded.”

Reforesting for the future

According to Warners, trees are exactly what the earth under Calvin’s lawns want. Every day, tiny trees pop up out of the soil.

“The land here wants to be a forest,” Warners said. “You have to work against the land if you don’t want a forest.”

Planting more forests is one way that Calvin invests in a future that is increasingly defined by climate change. “When you’re looking at a tree, you’re looking at carbon that used to be in carbon dioxide in the atmosphere,” Warners said.

Planting forests on campus also decreases the amount of lawn space that needs to be fertilized and mowed. According to Warners, fertilizer carries a huge carbon footprint, as do lawn mowers and leaf blowers. Native trees don’t need to be fertilized, because they produce enough nutrients in their leaves. When leaves fall, the nutrients enter the ground, and the tree can reabsorb them. And leaves are carbon-free.

“Let the leaves stand,” Warners said. “The mowing, blowing, fertilizing and chemicals all have carbon costs.”

Branching out for generations to come

In the past two decades, Calvin’s trees have faced major threats from the university’s facilities expansion and building construction. According to Warners, the expansion of the Field House and the construction of the van Reken resident hall were particularly brutal, because they resulted in eliminating almost a third of the forest on the north side of campus.

In order to mitigate the effect of cutting down the older forest, new forests were planted. The Field House mitigation resulted in two new stands: one along the perimeter of van Reken Hall and one along the Burton Street entrance.

One particularly important tree for the new Burton entrance forest is a large tulip poplar. Originally planted as a free-standing memorial tree, it now supports the growth of more than ten younger trees.

For Warners, the tulip poplar demonstrates how trees have a life philosophy that all of the other organisms on campus can benefit from. “Trees are so important because they have time that’s different than ours,” Warners said. “They stretch to both the past and the future.”

Another new forest, planted in 2021, stands along the west side of the Spoelhof Center. The mitigation crew killed the lawn and planted new oak and birch saplings. Even if it looks scrawny at the moment, over the next decade, it should start to flourish, according to Warners.

“Just like we go a middle school stage, trees and forests go through their adolescents, too,” Warners said. “It’ll look pretty in a few years, even though it looks scrawny right now.”

Despite the natural beauty of Calvin’s newest forests, Warners noted that the aesthetics of the natural landscaping sometimes clash with that of the lawn. Some people think that the woods look messy, or that they give the impression that the institution doesn’t care about what it looks like.

For Warners, however, the forests represent how much Calvin does care about the environment. “That’s why the forest is so important — we actually really do care about it. We don’t need to get rid of all the lawn. We just need to recognize the cost of it.”

“Trees are so righteous,” Warners said. “They have all these benefits: their leaves fall and fertilize the ground. They make seeds for birds, they provide shade, they put water into the air for precipitation. There’s nothing wrong with a tree, unless it’s invasive.”

Warners recognized that investing in trees might not seem to make sense at the moment. Trees don’t produce benefits quickly: A newly planted sapling doesn’t grow into its full potential for at least one human generation, often two or more. But for Warners, the transgenerational nature of trees is precisely what gives them their value.

“Trees stretch backwards in time and forwards in time,” Warners said. “They connect us to something greater than ourselves.”

And Calvin’s tree people have done precisely that, by planting one of the most slow-growing and long-living trees on the planet: a giant sequoia.

Speelman planted Calvin’s single sequoia. It stands along the beltline on the north end of campus. Originally, a computer science professor donated a one-foot sequoia sapling to the university; today, the tree is about three feet tall.

“I’m hopeful it will keep growing,” Speelman said. “It’s a tree that’ll be there for centuries.”