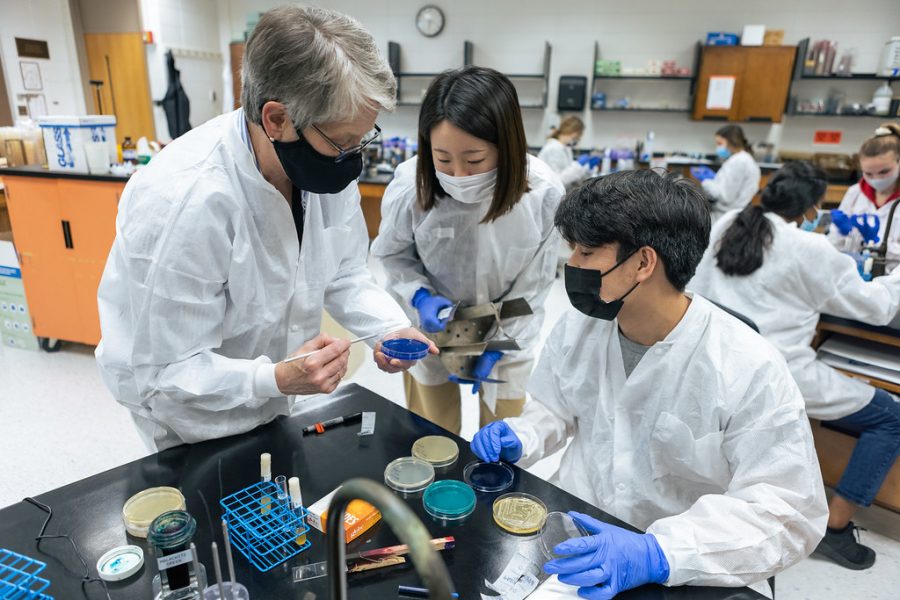 When military veteran and biology and nursing major Anthony Sickman first took general chemistry, he was completely amazed. He was in his mid-twenties, surrounded by 17 and 18-year-olds.

For Sickman, chemistry and physics posed some of the greatest challenges. When he first enrolled at Calvin, he hadn’t taken a chemistry course in 10 years. He took a circuitous route to Calvin: After graduating high school, Sickman joined the Marines. Although he found his work in the military fulfilling, it was physically taxing.

“After a while, it really starts to wear on your body,” Sickman said. While still on deployment in Japan, he bought a house in Grand Rapids and enrolled at Calvin, where he worked to start a new career in healthcare.

Sickman isn’t the only student in Calvin’s STEM division who returned to formal education after a first career.

For Gabrielle Billow, a speech pathology graduate student, Calvin is the seventh institution she’s attended. She completed her freshman year of undergraduate coursework at Alma College, during which she met her husband. After a year commuting weekends to see him, she transferred to a closer community college for a year. The next year, her husband joined the military, and she moved with him to North Carolina.

Billow found it hard to complete her degree as a military spouse, so after completing her associate’s degree online, she decided to start a career that required less education. She worked in the insurance and investment industry for a couple years.

However, her husband was later injured. After his injury, they decided to move back to Grand Rapids so that Billow could complete her education. She finished her bachelor’s degree at Grand Valley and then enrolled at Calvin.

Joshua VanZeelt, a mechanical engineering major, got his first Calvin degree in psychology and youth ministry. After a couple of years in different psychology master’s programs, he realized that counseling and psychology weren’t what he wanted to do. After consulting with his wife and other family members, he decided that what he really wanted to do was engineering.

Ted Duncan, a current science secondary education major, graduated with his degree in architecture from the University of Texas. After working as an architect for several years, he raised his kids as a stay-at-home dad. Eventually he decided to re-enter the workforce — as a teacher.

“I’d thought about teaching for a long time, even when I started college in 1987,” Duncan said. “I decided it was now or never.”

STEM coursework is hard, particularly after a long hiatus.

“I love chemistry, I love physics,” Sickman said. “And I hate them with a passion. They don’t come naturally. But they are still some of the coolest things I’ve ever learned.”

“I don’t really love studying [calculus],” VanZeelt said. For his first undergraduate degree at Calvin, he came in as an engineering major, but switched to psychology during orientation because he wasn’t interested in the workload. As an adult, he has found the coursework is challenging, but has determined that engineering as a career is worth the effort.

Billow told Chimes that one of the greatest challenges she faces is navigating technology systems. When completing her Bachelor’s degree at GVSU, she got accustomed to Blackboard and the Google suite as online learning platforms. At Calvin, she had to learn to use Moodle and Microsoft Office software.

“I had figured it all out at Grand Valley, and then, switching over to Calvin, it was all different,” she said.

Duncan, too, has found the technology to be some of the most challenging aspects of returning to school. But despite the challenges of navigating a technology-driven university, he’s always felt supported.

“The fellow students have been wonderful,” Duncan said. He has always had support in navigating the information technology systems at Calvin. For example, his lab partners helped him learn to use his graphing calculator.

VanZeelt remembers a group project for his Engineering 101 class, during which his fellow students — who were traditional freshmen — didn’t know that he was an older, married student.

“We had been doing this project for a while, and we got along pretty well,” VanZeelt said. Then his phone went off, showing a picture of his then-infant son. Some of his group members were surprised by the photo.

“I’m obviously old enough to have a kid,” VanZeelt said, “but I had to explain to my group that I was older and already married, so they didn’t think it was a high school mistake.”

For Billow, being older feels different, although it hasn’t prevented her from making friends. “I always feel like the grandma of the group,” Billow said. “But I get along with everybody.”

For Sickman, connecting to campus has meant connecting with other non-traditional students.

“When I first started, taking classes with 17 to 19-year olds, it was really difficult,” Sickman said. “Finding other people who are adult learners is really important.” Often, he finds that older students have the work ethic necessary to succeed in school, while also navigating the necessary parts of life. “You have to have the hunger,” Sickman said. “If you don’t have the ferocity to get in and network and have that drive and desire to learn, it’s going to be a difficult ride.”