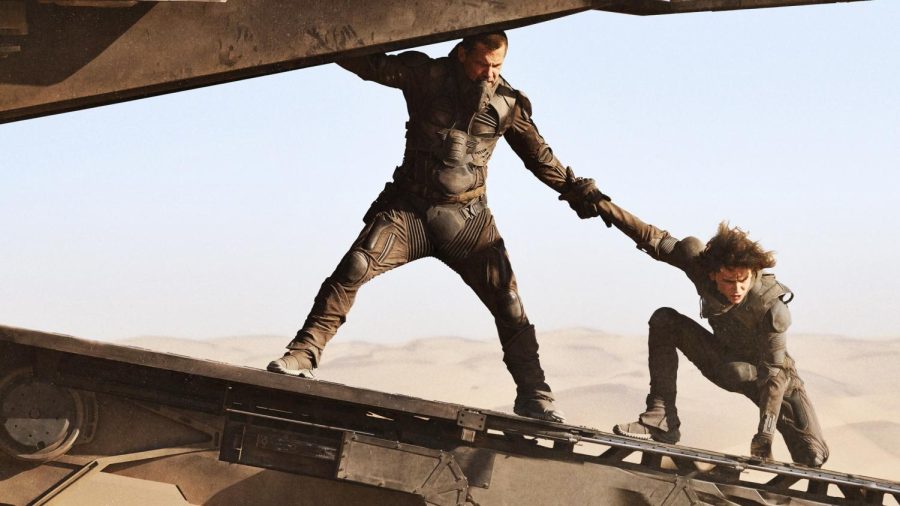 Adapting "Dune" to film has historically been a risky endeavor. Did Denis Villeneuve's star-studded effort pay off?

Denis Villeneuve’s “Dune” was always going to be an ambitious project. The film is based on Frank Herbert’s acclaimed novel of the same name, which has garnered attention from a variety of notable filmmakers, such as Ridley Scott and David Lynch, since its release in 1965. The source material is dense and complicated, resulting in several attempts at lengthy screenplays, with some approaching fourteen hours in length. Lynch’s adaptation made it through production at an initial four hours, but was forced down to half of that by the studio and released in 1984. As a result, audiences were given a pamphlet that contained a glossary of terms so that they could follow the story. All this to say, “Dune” has always presented a time-consuming and expensive challenge to even the best filmmakers and difficulty for viewers.

This intriguing and complicated history, as well as the rumors of a sequel, made me eager to see “Dune.” While in many ways “Dune” is a noteworthy example of grand-scale worldbuilding, it fails on many of its finer points. However, to view this movie as a singular event would be an unfair disservice to a story that was always going to require time and patience. “Dune” cannot be holistically critiqued until Villeneuve’s work is complete.

“Dune” takes place in the year 10191, in which the galaxy has been collected under an imperial administration. The brutal Harkonnen family has been expelled from the lucrative desert planet of Arrakis, where a valuable spice is harvested. House Atreides has been sent by the emperor to continue the harvesting operation, though they quickly realize there is much more afoot on the planet, and abroad in galactic politics, than they first anticipated. The film follows Paul, heir to House Atreides, as he combats threats to his family and the weight of his future.

Though deserving of grace due to the difficulties addressed above, “Dune” comes short in several areas. The first is technical. Recently there has been a trend in filmmaking of heavily layered audio, mingling rising pulses with sweeping scores, usually overlaid with onscreen action in order to create a broad, epic feel. While this often works well with the gorgeous desert scenery of “Dune,” it also sneaks loudly into critical scenes in an attempt to build intensity. However, this frequently makes dialogue utterly incoherent. At times, the poor audio mixing  means moments of exposition are lost that were key to the rest of the movie, and as a result viewers may be totally lost at critical points in the film.

A second issue is related to one of the first things taught in most film courses, a simple, but crucial filmmaking tenet: “show, don’t tell.” This film almost never shows, instead subjecting the audience to literally forty-five minutes of exposition awkwardly shoved into conversations that are also supposed to be emotional or meaningful. For those who have read the book, these scenes may seem natural or easily grasped, but for someone who is unfamiliar with the source material, they will find themselves hammered by vague lectures that are often incomprehensible due to the previously mentioned audio issues.

A third and final significant complaint is the lack of relatable characters. Despite a brilliant cast that delivers competent performances, the film fails to offer three-dimensional characters, instead offering familiar, and frankly boring, archetypes. While some of these characters may not be important or remarkable in the long-term scope of “Dune”, the film carelessly and instantly sidelines most of the characters after they have fulfilled their basic role in the story, leaving them forgettable and vague.

Despite these complaints, “Dune” is not unlikable. On a surface level, it’s a cinematic masterpiece, featuring top-notch production design, a vibrant score and incredible camera work. Its visual worldbuilding is brilliant and beautiful, and the overall narrative leans on a well-established, classical structure. “Dune” is consistently and easily absorbing, maximizing its epic qualities for an engaging and immersive experience.

The movie is also undeniably flawed. While on a grand scale it is impressive, the effort it must exert to establish the technological and political context of the world leaves little room for attention to finer details or to create characters that are meaningful or memorable. The characters are empty, the story often convenient for the sake of speed, and the dialogue frequently unintelligible. For those looking for a sweeping, masterful epic, “Dune” does the job. But for an insightful, emotionally engaging or unique story, we may have to wait for the sequel.