‘Luminous’ tells the story of a Calvin astronomer’s risky prediction 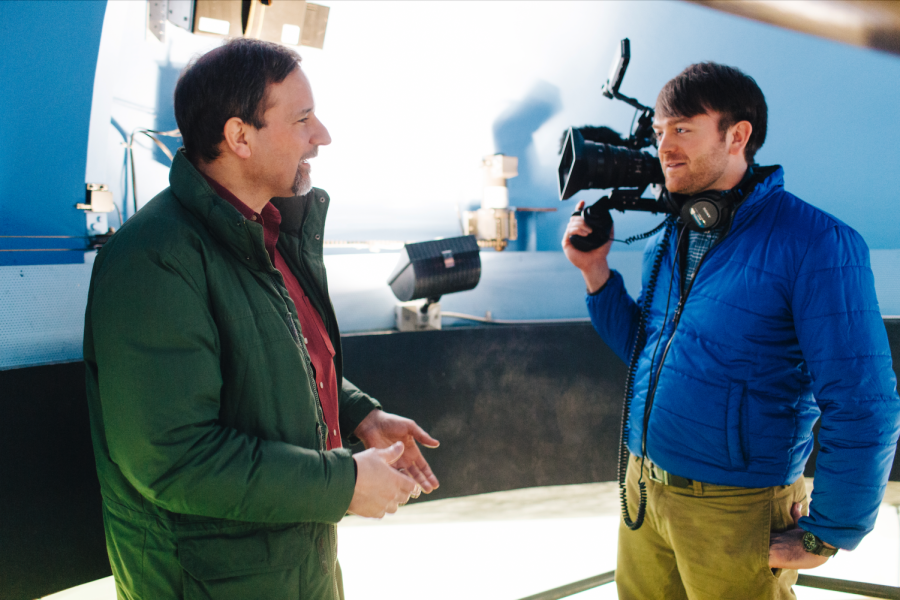 "Luminous" documentary, directed by professor Sam Smartt and about professor Larry Molnar, finally makes it to the Calvin community after seven years of production.

In the fall of 2014, then-Calvin physics professor Matthew Walhout pitched an idea to a new film professor, Sam Smartt: a documentary about the first astronomer to publicly predict an explosion of a star in the near future. It was an underdog story packed with risk, uncertainty and wonder — and it happened to be about Calvin astronomy professor Larry Molnar.

After about seven years of production, the nearly completed film documenting Molnar’s quest for knowledge will be playing on campus this Saturday, Oct. 23, in the Covenant Fine Arts Center, no tickets required.

“It’s really exciting to have a finished film at last!” Molnar wrote in an email to Chimes. “I think the story had more twists and turns as it unfolded than Prof. Smartt could have imagined at the outset.” He noted that this portrayal of the scientific process’s complex and satisfying nature is a key element of the film.

Molnar also reflected on his experience as the subject of the documentary. “Having a filmmaker follow one around for five years, tracking both private and professional life, is disconcerting to say the least,” he said. “However, Prof. Smartt was clear from the outset that his purpose was to portray a whole person, not just a particular side of me.”

“It’s gonna be a celebration,” Smartt, the director and co-producer of “Luminous,” said of the showing. The production team has been doing small showings here and there, but this is the first time the larger Calvin community will be able to see it. Smartt said that the film will be particularly special for the Calvin community because it deals with “some of the things [the university has] been through as an institution.”

“It makes a statement about the kind of institution that allows this kind of work to be done,” Smartt said, noting that many universities wouldn’t have taken on Molnar’s higher risk astronomical research. The film is also relevant in light of the astronomy minor being cut last summer: “It asks a question about whether this is something we will continue to do.”

The documentary highlights the involvement of undergraduates, especially at a school with no astronomy major and no graduate students to assist with research.

Michaela Blain, a 2020 graduate, first became involved in Molnar’s project while working at the on-campus observatory. As an underclassman, she learned to measure changes in the brightness of contact binary stars (two, very close together stars that have the potential to merge or explode). By the summer before her senior year, Blain was in charge of creating 1.7 million computer models of contact binaries using Calvin’s supercomputer, called “Borg.”

Blain attended a virtual screening of the film with others who had been involved. “It was a really meaningful experience,” she said. “I have a much better understanding of how my work and time at Calvin fits into the bigger story of Professor Molnar’s contact binary research.”

The undergraduate involvement extends behind the scenes as well. Daniel Baas, who graduated in 2016 with a video production degree, began working on the film in 2015 as a McGregor Fellow. He worked as an assistant editor, ran sound and even traveled to New Mexico and Wyoming with Smartt for shoots. His involvement continued even after graduation.

“It’s rare to find the opportunity to experience working on a doc of this scope, so to get that chance still floors me,” said Baas. “Being able to finally see ‘Luminous’ as a completed story is still a bit surreal. The fact that I’ve been involved, directly and indirectly, for over six years is something that still surprises me.”

Smartt hopes the film will stir conversations about faith and science. In contrast to the troubled relationship many Christians have with science, Molnar’s story as a Christian and astronomer shows how many of the virtues of faith are compatible with science.

“This is a story about intellectual humility,” said Smartt, who connected the themes of the film to his own experience creating it. Just like Molnar can’t predict exactly what he’ll discover as a scientist, Smartt can’t control every aspect of the stories he tells as a documentary filmmaker — something he’s shared with his students in class. “It gives me an opportunity to exhibit the virtue of faithfulness.”

The screening will be followed by a Q&A with Smartt and Molnar hosted by philosophy professor James K. A. Smith. More information about the event can be found on the SAO website.