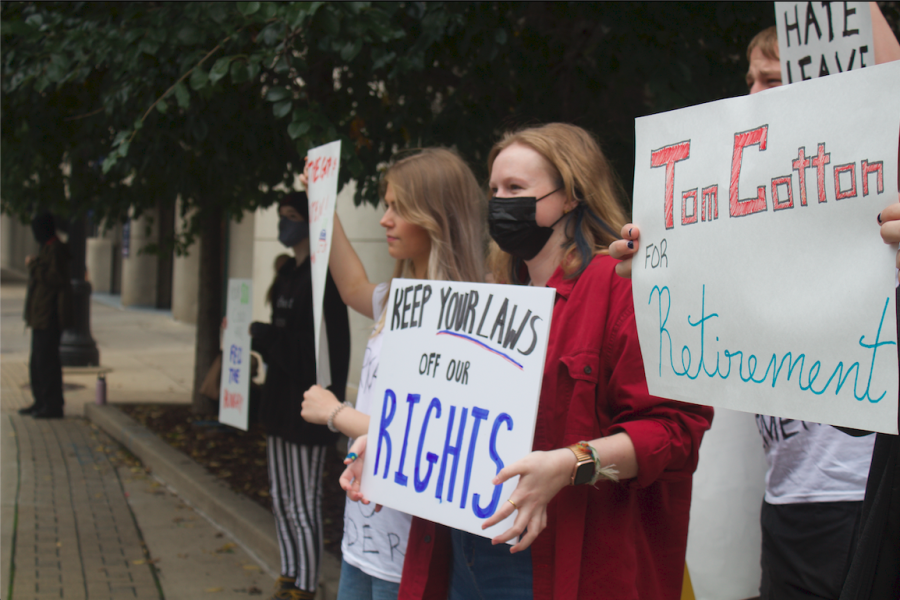 Protestors stood outside one of the most prominent fundraising dinners for the Kent County GOP.

A group of Calvin students gathered to protest guest of honor Senator Tom Cotton outside the Kent County GOP’s Lincoln Day Dinner on Thursday, Oct. 14, shouting “Hey! Hey! Ho, ho, ho! Tommy Boy has to go!” and “From Arkansas to Michigan, you better not come this way again!” outside the JW Marriott in downtown Grand Rapids.

In addition to customized chants, the protest, led and organized by six student members of the unchartered Calvin Left student organization, featured hand-painted signs and customized shirts with phrases like “Tom Cotton for Retirement” and “Get Your Hate Out of My State.”

Cotton, an incumbent senator of Arkansas, has come under fire for a number of his views. The Calvin Left highlighted a variety of critiques of his positions in a recent Instagram post, including opposition to immigrant amnesty and support for the Muslim ban. Protesters said they were critical of the Kent County GOP for choosing Cotton as the dinner’s guest of honor and main speaker.

The protest was peaceful, with protestors conversing and even joking amongst themselves between chants. As dinner attendees walked by the protest, most did not engage, but some did snap photographs, with one passerby even going so far as to take selfies with the protestors and signage. Protesters also interacted with drivers who came up to them with questions.

Although most bystander interactions were peaceful and educational, one was confrontational, in which one man (not associated with the dinner inside) took issue with the signage and swore at the group.

For junior Ella Pastoor, Senator Cotton’s presence in Michigan hits closer to home. A resident of Arkansas, Cotton goes “against everything” she stands for. With Cotton being a key actor in the advocate for anti-abortion legislation, Pastoor worries for womens rights and the overall “damage he has caused in Arkansas.”

Junior Mica Walter-Rooks, a resident of Grand Rapids, emphasized a similar sentiment on a more national level when they outlined some of Senator Cotton’s other controversial policy decisions and media statements to an interested bystander, such as the fact that Senator Cotton opposes President Biden’s most recent bill regarding immigration reform.

Despite not being from Arkansas, sophomore Jonathan Cooper voiced concern about Cotton’s actions on a state and national level, echoing Pastoor’s concerns about rights. “Even though he’s not a senator from my state, he’s a very important senator in the GOP with a lot of influence and a lot of things he’s said and done I find reprehensible, particularly a lot of the comments he’s made about protestors fighting for racial justice and sending in the military to deal with peaceful protestors.”

The Calvin Left, which aims to provide a space for all students who identify to the left of the Democratic Party as well as advocate for and educate about leftism hopes to be chartered for the spring semester and will continue to participate in politics here in Grand Rapids.

Disclaimer: Jocelyn Nuñez-Colón is the roommate of one of the protest’s organizers. Chimes has vetted the story to preclude bias and ensure accuracy.