Congregational and ministries studies: A look inside the department with no full-time professors and no major 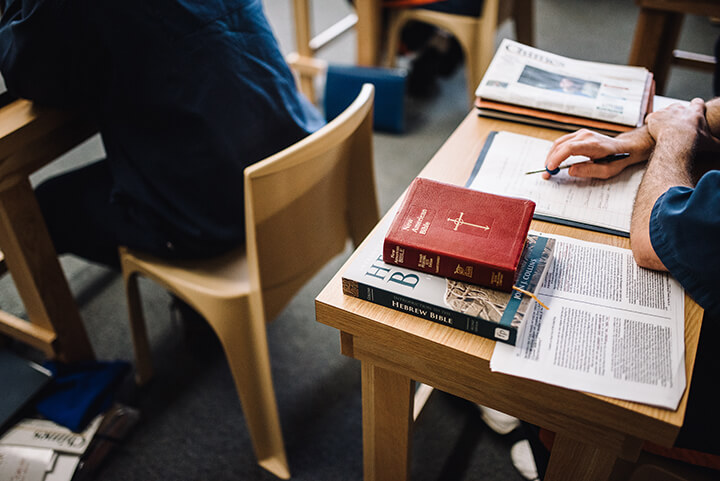 Since the start of the Calvin Prison Initiative, the CMS department has had no full-time staff. Cioffi shares his time between CMS and directing CPI. Photo courtesy calvin.edu

“I came to Calvin specifically to help start the CMS department,” said Professor Todd Cioffi. The job description stated that Calvin was starting a new department focused on interdisciplinary teaching about the role of the church. And they would only hire one-full time faculty. Cioffi was drawn to what this role would entail. “I’ve always kind of worked in areas where I’ve kind of had a foot in a church, and then a foot in something else. Literally, when I saw that I’m like, wow, what do you know; somebody finally made a job for me. I couldn’t have written the job description better,” Cioffi said. That was 13 years ago.

Cioffi is an associate professor in the department of congregational ministry studies and the director of the Calvin Prison Initiative. He came to Calvin as the only full-time member of the CMS department. Other staff would be “affiliate faculty that would draw on the different departments here at the university,” he said.

“The idea behind the department’s kind of conception was that this was an opportunity for students to think about how to pair a sense of calling to church leadership with anything else they’re doing,” Cioffi explained. “If the church is kind of what God has established as really the center of gravity for Christians, well then, how does that intersect?”

The CMS department is the only department at Calvin that does not offer a major. Cioffi said that was the goal from the beginning. “There was never interest in offering a major. And so what we needed is a lot of interdisciplinary courses and people involved. So that’s why all the affiliate faculty,” he said.

Professor Mark Mulder from the sociology and social work departments is one of the affiliate faculty for CMS. He co-teaches CMS 151: “Church in Society” with Cioffi.

“It’s been a great experience. It’s a rare opportunity to actually engage in interdisciplinary teaching,” Mulder said. “Having another [professor] in the room from another discipline allows us to engage in provocative conversations that challenge us and force us to reflect in new ways about our own disciplines.”

“So I teach as a theologian, he teaches as a sociologist and basically we are looking at the church together,” Cioffi said. The course focuses on how different disciplines see the church, which represents the foundation of the department. “That’s really kind of what the department has been about all these years,” Cioffi said.

This connection between different disciplines and their roles in the church is what called Cioffi’s attention the most back in 2008.

“When they described the department, this opportunity for interdisciplinary activity; yeah, you’re in the church but you’re also involved in different parts of the world, so to say. That was me,” Cioffi said.

During his college years, Cioffi knew he wanted to get ordained and become a minister.  “At the same time I had a lot of interest outside the church, but I never wanted to leave the church behind. And so throughout my academic career, I’ve always tried to blend the two,” he said.

Cioffi was hired as the only full-time faculty for CMS, but his position changed to half-time with the start of the Calvin Prison Initiative.

“So now, CMS doesn’t have any full time professor … which in some ways as you can see now makes a lot of sense, that there’s not one of us who only wears one hat.”

It all started with Calvin Seminary offering one course a semester at a prison in Ionia, Michigan. “I had actually done some prison work back in seminary, years ago,” Cioffi said. He was invited to teach a course there: an experience he enjoyed. “So I taught there one semester and loved it, of course, and eventually they said ‘Hey, we’re gonna turn this into a program,’” he said. “Well eventually it came down to, ‘hey would you want to help direct this program?’”

Since then, Cioffi has shared his time between his responsibilities in the CMS and CPI. “So now, CMS doesn’t have any full time professor … which in some ways as you can see now makes a lot of sense, that there’s not one of us who only wears one hat,” he said.

Cioffi’s responsibilities range from working with CMS students, to teaching in the prison, helping develop new courses and meeting with faculty or donors to meeting with politicians about prison reform.

“I literally have three offices right now … So, that symbolizes how it looks. Literally, there is no one day the same,” Cioffi said. “Eventually we’ll get it down to one but that is so symbolic of my career here so far at Calvin. And, again, I love it. Makes hectic days some days.”

Cioffi learned how to exercise rest and balance to manage those hectic days through his experience working in Atlanta years ago. “I lived in a Christian community in Atlanta that worked with homeless people. And we would offer a breakfast every morning that we could serve 250 people,” he said. As the one responsible for working the door, Cioffi had to learn when to quit for the day. “That taught me a lesson that there does come a time when you have no more resources, when you got to shut the door,” Cioffi told Chimes. He also acknowledged that developing this ability has been important given the ongoing needs of the people he serves in ministry, calling it a “spiritual exercise.”
“We’re probably going to lose some faculty due to budget cuts. But let’s not lose sight of the fact that those who are here, they’re awesome.”
“It’s also a lesson in learning that you’re finite and you’re mortal and that you’re the created,” he said.

This spiritual exercise has also trained Cioffi to view his role as a team player. “Michael Le Roy, the president, described what I do one time. I’m not a baseball guy, but he used the baseball image. He said, ‘There must be a person in a baseball team who can play multiple positions.’ … I’m kind of that person,” Cioffi said.

Cioffi recognized that a foundational aspect of his work is the people he works with and acknowledged the loss caused by faculty cuts. “That’s the bad news. The good news is there are some faculty here that are awesome. There’s so much hard work that goes on behind the scenes,” he said. “We’re probably going to lose some faculty due to budget cuts. But let’s not lose sight of the fact that those who are here, they’re awesome.”

One of the people Cioffi admires is John Witvliet, chair of the CMS department. “He does so much for this university. He sits on so many committees. And it’s all behind the scenes. Students would never know. So again, he embodies CMS; that’s why it works,” Cioffi said.

Cioffi described this support among the staff he works with as “church-like.” “In the church, eventually we rely on others,” he said.

The same way, Cioffi found his joy through his work with students.

“There is no greater joy than seeing a student flourish. And to know you had a hand in it. You didn’t do it; you had a hand in it,” Cioffi said. “That’s true here in the main campus, true in the prison … when a student begins to get clear on what God’s calling them to do, honestly, I think that’s what for me, that’s it. That’s really it.”

Cioffi also realized some of his hardest moments through the years have been with students. “It breaks my heart, every time I see a student really have a sense of call to ministry but a parent or parents are worried about finances, that doesn’t pay well. And they get talked into getting a well paying job,” Cioffi said.

He understood the motives behind it yet believed in the importance of taking the risk. “I think God’s calling in our lives is very risky. And so I’m not a fan of caution. not a huge fan of safety,” he said. “And yet, we’ve kind of domesticated God’s calling. And we’ve made it more manageable, you know, more middle class. And I just hate that.”

Looking to the future, Cioffi believes there is a need to raise more church leaders in Christian institutions like Calvin. He said that the impact of seeing fewer church leaders is a generational one.

“You need to tell your child that God may be calling him or her. Can you imagine that today? Can you imagine if that was said in chapel? I think you’d have a lot of mixed reactions. Some people would almost be offended perhaps,” Cioffi said.

Thinking of his own career, Cioffi realizes he has been led by people’s needs and what he could to do address them. And he invites students to do the same.

“I think Christians ought to be ready to say ‘yes,’” he said.