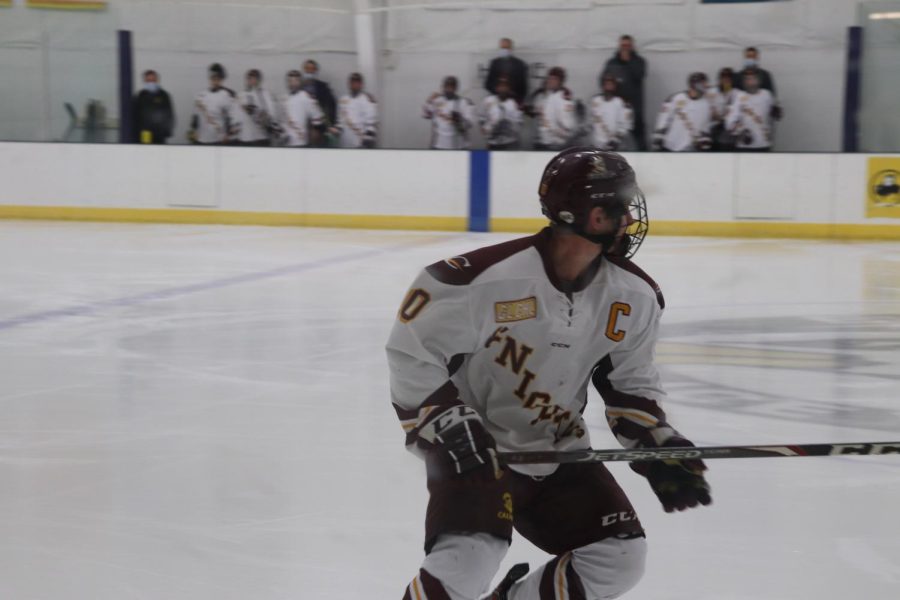 Calvin and Grand Valley State will face off on Thursday in the programs' first meeting as ACHA DI rivals.

Grand Valley State can look to Calvin as a model for reaching quick success after stepping up to hockey at the American Collegiate Hockey Association Division I level. Five years after Calvin made the jump to the DI level, the Lakers are making the jump on their own, as 2021 marks their first season competing as a DI program. The rising Lakers will seek to establish themselves on Thursday when they take on the Knights at Eagles Ice Center at 6 p.m.

Although they’ll be rivals on the ice Thursday night, Calvin Head Coach Mike Petrusma and Grand Valley Head Coach Carl Trosien have exchanged friendlier messages as the Lakers seek to follow Calvin’s path. “When they were looking to make the change, he and I talked quite a bit,” said Petrusma, who has served as Calvin’s coach for 17 years. Starting in 2021, Grand Valley will field an ACHA DI and ACHA DIII team, just as Calvin has since 2017.

The ACHA operates independently from the NCAA, which is the primary organizer for most collegiate sports. Unlike sports like basketball and football, hockey doesn’t have a high number of schools with participating NCAA teams, especially at the Division II and III levels. The ACHA offers a place for talented athletes to play at schools located close to one another so that schools like Calvin don’t have to travel great distances to play against NCAA schools.

“It’s an extremely high level of hockey,” Petrusma said, noting that many ACHA athletes would play at a high level in the NCAA if the institution simply had more teams. “The guys that are coming into our program now, they’re extremely talented,” Petrusma added. “It’s fun to coach them.”

Despite the high level of competition, Calvin has experienced considerable success. Last year, the team made the national tournament, finishing 13th in the country. In the previous season, the Knights were ranked in the top 20 heading into nationals, which were cancelled because of the COVID-19 pandemic.

Grand Valley enters Thursday’s game coming off of back-to-back blowout wins over Eastern Michigan, who they defeated 9-1 and 8-2 in games last Friday and Saturday. “They’re a good team right out of the gate. It should be a really good contest,” Petrusma said.

Thursday’s game won’t be the last this season between Grand Valley and Calvin. The Knights are set to face the Lakers four more times in the regular season, with games on Oct. 29 and 30 and Jan. 14 and 15.

The four games will be a large part of a grueling conference season for the Knights. “Every team on our schedule is good,” Petrusma said. “It’s a challenge each and every week.”