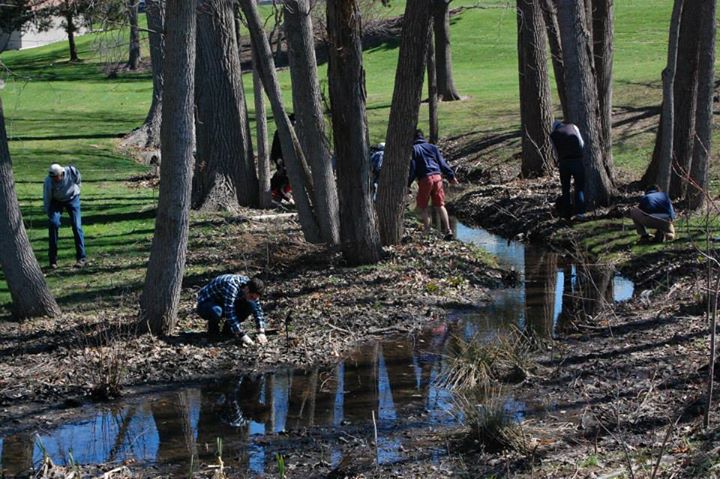 A “code red” for humanity, as UN Secretary-General Antonio Guterres described, was issued on August 9 when the Intergovernmental Panel on Climate Change released the first document of its sixth Assessment Report, “Climate Change 2021: The Physical Science Basis.” According to Calvin students and professors, the warning ought to be taken seriously by both Calvin as an institution and individuals.

Based on assessments of over 14,000 scientific papers and on terms approved by all 195 member nations of the IPCC, the 234 scientists who authored the document stated that it was “unequivocal” that human influences have caused major unprecedented and irreversible changes to Earth’s climate. Haley Weesies, a senior majoring in environmental science and interning with Young Evangelicals for Climate Action, said that for scientists to describe a conclusion as “unequivocal” was scary, as it indicates the presence of overwhelming evidence.

According to the IPCC document, new models, methods and data have improved scientific understanding of human influence on a “wider range of climate variables” since the AR5 2013 report. The document finds that unless immediate and large-scale reductions in greenhouse gas emissions are made, it would be “beyond reach” to limit global warming to the critical threshold of 1.5 or even 2 degrees Celsius. Human actions have already caused 1.1 degrees Celsius of global warming since 1850-1900, and it is expected that 1.5 degrees Celsius of warming will be reached or exceeded over the next 20 years.

Biology professor Dave Warners pointed out that while warming of one to two degrees in the global average doesn’t sound like much when added to our sense of temperature, it will be catastrophic in effect. Many rapid changes to climate, including sea level rises, intense rainfall and drought, heatwaves, and loss of polar ice caps, have already become irreversible. Additional warming, according to the report, will only increase the severity of the changes we experience.

Many at Calvin have already felt the effects of climate change. Unprecedented heat waves have intensified West Coast wildfires in 2020 and 2021, with 2020 being the largest and worst wildfire season in California’s modern history. For Calvin students from the West Coast, the record-breaking loss and destruction hit hard as communities also struggled with the pandemic.

Because of a “wildfire season exacerbated by climate change,” Isaac Spackman, a senior majoring in chemistry and mechanical engineering and former president of the Student Sustainability Council, said his family’s hay farm in Oregon was affected by some of the worst air quality in the nation. Extreme heat has also caused droughts leading to regional water shortages and irrigation rationing. Water rationed for the Spackmans’ farm has dropped to only 50 percent of usual volumes, and the local reservoir has dried to 1 percent of its total capacity, which is the driest it has been since 1949.

It was, for Spackman, disheartening to read the warnings of the IPCC report. Knowing that the IPCC reports have been released since 1988 with no great effect on policy, he said that he found it hard to believe that the report will receive a different reception.

“It’s a matter of environmental injustice,” Warners said. Warners added that these injustices in the effects of climate change ought to wake Christians up to their responsibility to love their neighbors as themselves.

“The proper Christian relationship to nature is to delight in, protect and preserve this amazing world God has allowed us to live in … as we far too infrequently remember the privilege of living here,” Warners said.

For Weesies, being a Christian means that we should consider ourselves in “kinship with the rest of creation” and love creation just as God loves what he created.

As a Christian institution, Calvin has been deeply committed to reaching carbon neutrality by 2057 and includes sustainability through Christian stewardship as a commitment in its core curriculum. Warners, however, believes that Calvin needs to take a stronger stand. The biology professor was frustrated that despite commitments to carbon neutrality, Calvin does not currently have recycling on campus. Calvin, Warners said, was sending “mixed messages.”

The changes called for by the IPCC report require drastic change to energy consumption and policies on institutional, national, and international levels. In his statement on the IPCC report, Guterres called on leaders from government, business and civil society to combine forces.

At Calvin, professors and students have also stressed that individuals, especially Christians, have the responsibility and opportunity to act.

“There are opportunities to learn on campus … and I encourage students to listen and seek out those opportunities,” Weesies said. As part of her work with YECA, Weesies is excited to be planting more trees on campus. More trees, Warners said, will reduce energy consumption from lawn space, and also absorb more carbon.

Spackman emphasized that combating the climate crisis is something every student can make a contribution to, no matter their major. “System change ultimately falls on individuals — we need to be those individuals.” At the same time, Spackman urged provost Noah Toly and the Presidential Search Committee to make sustainability and the climate commitment a priority going forward. “Calvin not only has the power to make a change in its own energy consumption, but by continuing to develop students with the capacity to think deeply about this issue and act justly in response … Change happens from the bottom up, but also from the top down.”