The Downsize Pt. I: ‘If you can leave, please consider doing so’ 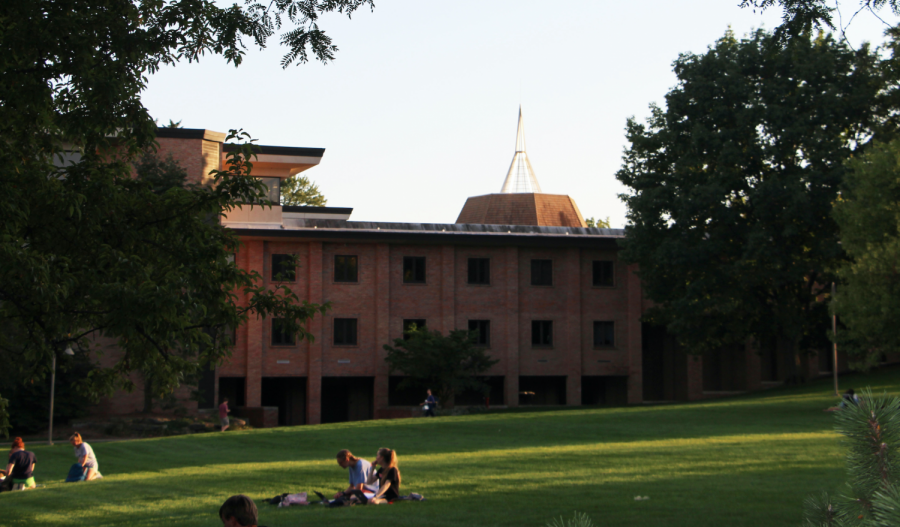 As faculty morale decreases in the wake of two years of layoffs and increased budget cuts, Calvin is giving experienced professors a way out.

In its latest move to cut academic program costs, the university is offering to pay professors with 15 or more years of experience to voluntarily resign next fall.

Provost Noah Toly announced the Voluntary Exit Incentive Program on Monday, Oct. 4. Under the new program, regular faculty members who have worked at Calvin for longer than 15 years are eligible for up to 75 percent of their annual salary in severance if they choose to resign, according to a human resources information packet given to Chimes by faculty members.

The program is part of a larger plan designed to address current and predicted decreases in revenue and enrollment in the next five years. Toly’s letter introducing the program also says it will serve to “minimize the prospects for involuntary separations.”

“This sends a pretty negative message to faculty members about our jobs and the state of the university, and it raises all kinds of questions about what’s coming next,” biology professor David Koetje told Chimes.

Koetje, who’s worked at Calvin for 23 years, said it would be too difficult on his family if he were to resign. His high school-age son hopes to attend Calvin someday, and if Koetje were to leave, his son would lose the opportunity for a tuition waiver. Still, the idea of the decision weighs on him.

“It’s an awful place to be. You’re trying to balance between the needs of your family and the institution,” Koetje said.

The type of faculty targeted by the VEIP are experienced and thus expensive to the university. Professors with long histories at Calvin typically have higher salaries reflecting their deeper academic knowledge and teaching skill. Other institutions are less likely to invest in hiring these older professors, according to Koetje.

Though the VEIP is completely voluntary, it’s not without its pressures.

“There will be people who are going to leave simply because they’re concerned that others might be let go if they don’t,” said Gary Schmidt, an English professor eligible for the program. “… It’s a really awkward place to put a faculty member in, because it makes it seem as though the faculty member is responsible for someone else’s job or is making a decision that means someone else goes.”

Approximately 120 of Calvin’s 183 regular faculty members are eligible for the program, according to Andy George, director of human resources. It’s too soon to tell how many are seriously considering the option.

According to the provost, the plan wasn’t designed with a specific numeric goal in mind.

“The goal of the voluntary exit incentive is not to generate a specific number of faculty departures or a specific reduction in expenses. Rather, the goals include achieving a greater percentage of our budget adjustments through voluntary departures, generating the budgetary space we would need to make other changes less abrupt, and gaining traction and valuable information early in our planning cycle,” Toly told Chimes.

“It does send the message that if we don’t get people taking advantage of this, then yeah, there will be some further layoffs,” said Koetje. “They’re saying, ‘If you can leave, please consider doing so.’”

Of the 13 professors Chimes spoke to, none were seriously considering the program at this time. Many said they had briefly looked over the information packet, dismissed the idea as unfeasible or undesirable and moved on.

Faculty members who do elect to participate will be expected to separate from the university on Aug. 31, 2022. However, if more than 40 percent of a department’s eligible faculty decide to leave the university under the VEIP, their exits will be staggered over multiple years, giving preference based on seniority.

Severance packages will be equivalent to two weeks’ pay for every year of service or 75 percent of a faculty member’s total salary, whichever is lower. These benefits will be paid out semi-monthly until Aug. 31, 2023.

Insurance coverage will also be available through Aug. 31, 2023, and faculty children at Calvin will be able to finish their education under existing tuition waivers.

A deadline of Oct. 29 gives eligible faculty just under a month to decide about their future at Calvin.

“It emphasizes the sense of crisis that Calvin is in,” said history professor Frans van Liere. He added, “There has been a great sense of loyalty of faculty to the college, and my fear is that that will be eroded with the rather short-term and haphazard nature of offers like this.”

Toly admits the program is a sudden announcement.

“I recognize that this program may come as a surprise to many, even if the realities it addresses are well enough known,” the provost wrote in his letter announcing the VEIP.

Those well-known realities include the COVID-related budget shortfalls and decreasing enrollment that have led to two rounds of program cuts and layoffs in the past two years.

The process was repeated in 2021, when the Board of Trustees moved to eliminate two tenured faculty members, five major programs and seven minors.

Twelve other faculty retired or resigned in 2021, and their positions were not refilled. The university also outsourced its facilities labor.

Departments have replaced many retiring full-time faculty members with contingent faculty in years past. A number of other positions simply haven’t been refilled. Contingent faculty are often cheaper for the university, vary in levels of experience and education, and do not take on the added responsibilities of committee membership or performing research.

“I’m incredibly grateful for the contributions of all our faculty — their transformative teaching, their wonderful scholarship, and their tireless and joyful service,” said Toly. “It is always sad when we have departures — even voluntary ones — but we trust that God will provide for Calvin and for our colleagues even in the midst of this change.”

As this series continues, Chimes will explore the impacts of increases in contingent faculty, the roles regular faculty play in decision making, the reasoning behind the cuts and layoffs of the past year, and the administration’s plans for the future.