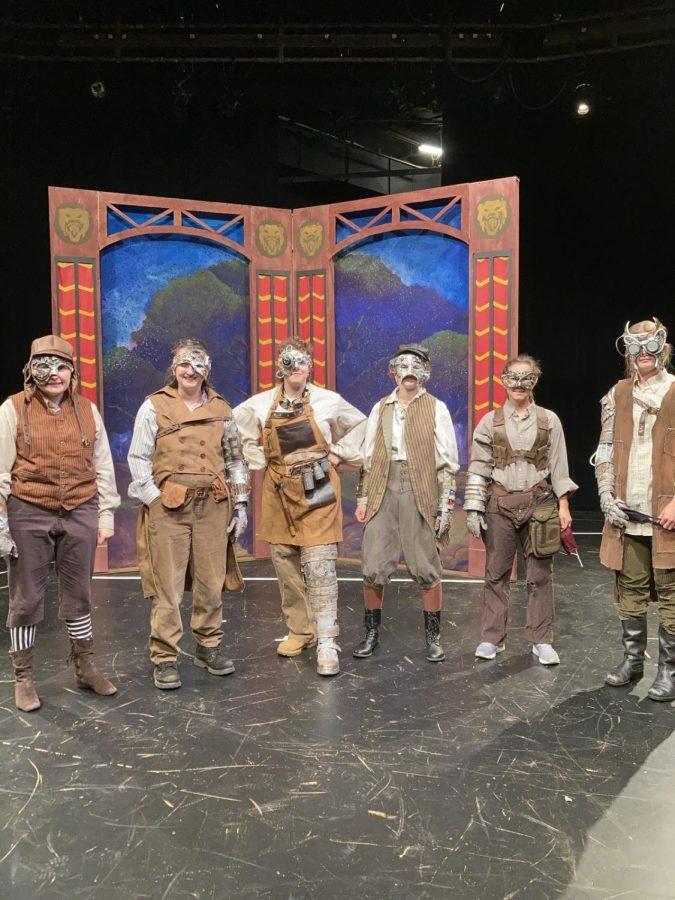 Rehearsals have looked a little different for the Calvin Theater Company this fall. As they practiced for their steampunk version of “A Midsummer Night’s Dream” on the chapel patio, the actors and crew were interrupted by pouring rain, noisy helicopters and the occasional longboarder. But the show must go on — in fact, this one’s been going on for almost a year.

The idea for the show came after CTC’s spring 2020 production of “The Tempest” was cancelled due to COVID, according to sophomore and head stage manager Emily Steen. The company intended to perform it in the following fall, but it didn’t work out. In lieu of rebooting that show, CTC opted to plan “Midsummer” for the spring of 2021 in the spirit of renewal.

But just before the show went into tech week, a few actors went into quarantine. CTC leaders made a collective decision to cancel the show and, according to Steen, they didn’t promise that the show would be performed this fall. Steen cited the emotional rollercoaster following the cancellation and re-cancellation of “The Tempest” as a reason.

“We hit rock bottom as a company,” Steen said. The cancellations came on the heels of Calvin cutting the theater minor and laying off theater faculty. “We could only go up from there.”

Despite the setbacks, CTC leaders eventually decided to plan on doing the show in the fall, this time with a few changes. According to sophomore and assistant stage manager Molly Reimers, six roles had to be recast in September — some actors graduated, others quit. Crew personnel shifted, including Steen being promoted from assistant stage manager to lead. And rather than performing in the Gezon Auditorium like usual, the company settled on a new outdoor location where actors could perform without masks.

“Where there’s a will in theater, there’s a way,” Steen said. “Even if there’s nowhere for us to perform but the chapel pavilion.”

The show’s set designer Brian Goodman said that shifting from the Gezon to the chapel patio has been a challenge.

“We modified the set immensely,” he said. Originally, Goodman and the production team had created large archways and Victorian-style columns to frame the stage. “That all went away.”

In addition to changing the set, the team has had to adapt to new lighting conditions since there’s not enough access to electricity on the chapel patio to recreate their prior vision. Instead, as the sun goes down during their evening shows, actors gather closer and closer under the glow of a single light. What began as a logistical challenge turned into a tool to direct the audience’s focus.

When the cast returned after the summer, they hit the ground running. The six empty roles were all recast with first-year students, who learned their lines in under a month.

“With the support I received from the rest of the cast and crew, stepping into a role in a few weeks was a lot less stressful than I was expecting,” said first-year student actor Gwendolyn Fulkerson.

For other actors, the show represents a long-awaited return to the stage. Hannah McNulty, who graduated last spring and now works full time at Eerdmans Publishing Company, is still performing in the show. She wanted a sense of closure, especially after rehearsing for “The Tempest” and watching it get cancelled twice — an experience she called “heartbreaking.”

“I just needed to finally perform some Shakespeare at Calvin,” she said.

After all the setbacks, the show means a lot to members of CTC, according to Steen.

“This is their moment of victory,” she said. “It’s a reclamation of what ‘The Tempest’ could have been.”

“We’re starting to joke that Calvin has a Shakespeare curse,” said McNulty. Pivoting in a different direction, the company is performing “It’s a Wonderful Life: A Radio Play” later this fall.

“The course of true love never did run smooth,” the Bard writes in “Midsummer.” Why should the love of theater be different? The show, which opened this past weekend, will be performed again this Friday and Saturday. Tickets can be purchased through Calvin’s box office website.