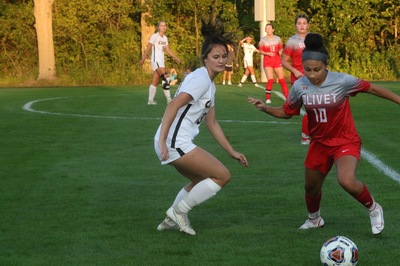 Calvin capitalized on two second-half goals to notch a win in its first conference matchup.

Though the Knights had the majority of possession and shots, the game remained scoreless into the second half. Sophie Mueller broke the deadlock in the 54th minute, scoring off of a corner kick. Mueller added another goal in the 83rd minute to put the game away.

Calvin tallied an impressive 42 shots, with 16 of them on target. Olivet managed to get five shots off in total, and Calvin goalkeeper Sarah Hoekwater made saves on all three shots on target.

Olivet entered Tuesday’s match having played only three games all season after six of their games were cancelled between Sept. 4 and Sept. 25. The Comets played one game after the lengthy pause, beating Mount St. Joseph 4-2 before facing Calvin.

The Knights enter the conference season with high hopes for the year, having been picked to win the league in the preseason MIAA coaches’ poll. The win over Olivet puts the Knights on a three-game winning streak in which it has outscored its opponents 9-1.

“Every conference win is important as each school is trying to win the conference title,” said Head Coach Emily Ottenhoff following Tuesday’s win. “We take each opponent as they come and aim to give them our best effort and focus.”

Calvin’s aim has been on target so far this season, as has the aim of Mueller, whose two goals against Olivet continue a string of stellar performances for the sophomore winger. Mueller leads the Knights with 11 goals and is tied for the team lead in assists with four.

“We love having Sophie on our team. She competes very hard and is willing to do whatever needs to be done to help the team win,” Ottenhoff said. “… Happy she could put two more in the back of the net to help us get a result on Tuesday.”