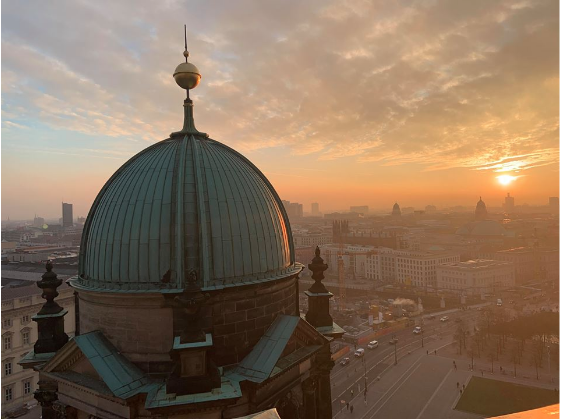 When senior Esther Lagerwey got an email this summer telling her that the German major was being cut, she was nervous. Lagerwey is a double major in German and political science, and had only ever taken German courses from Professor Corey Roberts, who lost his job due to the cuts. She had no idea what finishing her degree as her program was being phased out would look like and didn’t have Roberts to advise her through the transition.

Senior German major Luke Norvell found himself in a similar situation. “When I first heard that Calvin had cut a section of its foreign language program, I was worried as to whether I would be able to graduate or not, ” said Norvell. “After all, a Christian college with a good language program was my goal from the beginning. That was why I came to Calvin, and I’m all the way from Oklahoma.”

But finishing her degree in German hasn’t turned out to be a problem for Lagerwey, or any of the other Dutch or German majors Chimes spoke to. Dutch also saw its major program eliminated in June. Calvin continues to offer the German studies minor and German education minor, as well as core offerings in Dutch.

Norvell’s fears of not being able to graduate with a German major have also since been reassured. Although he would have been able to attain the necessary credits through course substitutions and independent studies if necessary, Norvell did not end up having to change his schedule at all because he already had fulfilled most of the German major requirements.

“I had been very vigorous in taking as many German courses as possible—before Calvin ever hinted that the German program would change,” said Norvell.

Students in the German and Dutch departments were notified of the program cuts in an email by department of world languages chair Otto Selles.

“The second day of school, I got together with Professor De Vries and he reassured me … and also figured it out for me,” said Lagerwey. German 300-level course offerings have been reduced, but the ones that Lagerwey planned to take are still being offered. “They’re really keeping their promise of letting people finish out the major.”

“It’s demoralizing to see your colleagues let go, one after the other, and to realize that your discipline is only marginally valued at the institution,” De Vries said. “At the same time, like all my colleagues, we love what we do; we believe in its value; and we are tremendously encouraged by all the wonderful students in our courses. I plan to give it my all to maintain the Dutch language courses and also a robust German minor.”

“I really appreciate Professor De Vries’ work; he took on a lot more than he normally has,” said Lagerwey.

Senior Joshua Smits, an accounting major and German minor, was also initially alarmed by the announcement of the program cut. “Before registering for this year I had five credits left that I still needed to fulfill for the German minor. And then I found out that the only classes that were available were classes I’ve already taken, so that was really a panic moment,” he said.

Like Lagerwey, Smits met with De Vries to figure out how to complete his German degree.

“Professor De Vries was great with working with me on it. We got everything worked out. I was able to retake a class for different credit,” Smits said.

To complete his German minor, Smits will be retaking German 390 as German 362, with a different set of assignments and responsibilities.

No such scheduling changes were required for Dutch minor Peter Mouw, a junior. Since he had already completed Dutch 101 and 201, the only traditional classroom instruction that Calvin offers in Dutch, Mouw planned to complete his Dutch minor through independent studies regardless of the status of the program.

“We in the department are working double duty to make sure that the students have the opportunities that they assumed they would have,” De Vries said.

Lagerwey praised the department’s perseverance.“We had our time of mourning over the summer and since then the professors and students have really just been trying to make it work the best they can,” Lagerwey said.

Smits was saddened by the news of the program cuts, but not upset with Calvin.

“I don’t want to bash on Calvin because I understand at the end of the day they have to make decisions, and yeah, it sucks that I was kind of affected by it…[but] that’s what they have to do,” he said.

Norvell is less happy with the administration’s decision to cut the German major. “Calvin has made decisions whose consequences have nearly eliminated the reason why I attended Calvin in the first place,” he said.

“I am deeply disappointed in Calvin’s administrative decisions to repeatedly reduce staffing in World Languages,” said De Vries. “It’s a strategic mistake, since Calvin had a robust offering of World Languages like almost no other peer institution.”

“Calvin was one of the few universities in the U.S. that offered degrees in Dutch and it is disturbing and sad that it is so willing to part with its unique and important linguistic heritage like this,” he said. “I don’t want to be the first generation that doesn’t know how to speak Dutch in my family, and I’m really glad that Calvin provided that path.”