Mind the gap: How students made the most out of their time off school in 2020 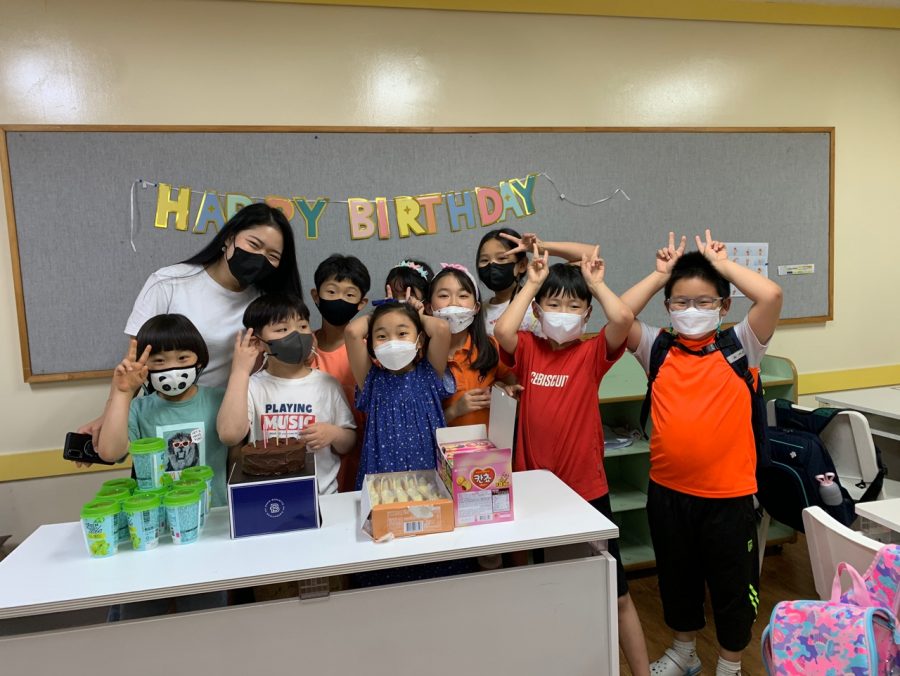 Jenny with students from one of the classes she taught in Korea. Photo courtesy of Jenny Shin.

“It was a year for growth,” said Isabel Post, looking back to last year.

Post, now a first-year student, took a gap year in 2020 before attending Calvin. “I knew that if I did go to Calvin straight away, I’d have to be in my dorm room … by myself and secluded, which no one does well when they’re isolated,” she said.

Unsure of what degree she wanted to pursue and concerned about COVID restrictions, Post followed a friend’s suggestion to join a one-year program called One Life Bible Institute. The Christian gap year program would take her to South Carolina, where she could earn 30 college credits, travel, develop community and grow in her faith alongside 30 other students.

Students in the program lived on a college campus where they were required to quarantine together for two weeks and live as a family unit throughout the year. “I was stationed at Southern Wesleyan University, and I lived in a dorm, went to classes … So I got kind of like the college experience,” Post said.

The main differences, however, were in the basic life skills Post learned through the year — things like budgeting, cooking for large groups and managing her time well. She was also affected by the classes she took. “One of my favorite classes was called ‘life calling’ and it really changed my perspective on … what it means to live out a life for Christ. Before I thought it was, you need to take these steps: you graduate high school, you go to college and you just work on the job for the rest of your life. And it was at that point where I found meaning in every single area of the workforce.”

In addition to classes and developing community, Post had the chance to go on three backpacking trips through Cumberland Island, West Virginia and through the Foothill Trails. She also traveled to Turkey, where she studied about the seven churches of Revelation for 10 days. “It kind of made the Bible come alive,” she said.

“I think one of the trips that really impacted me the most was when we went to Clarkston, Georgia, and we worked with refugees. In high school they talk about refugees and then Trump talks about refugees and … I don’t know, it’s just a word, and then it was there that I felt like it became a person. These people actually have whole stories,” Post said. “… It really brought the center off of me, onto other people.”

Throughout her gap year, Post kept wondering whether going to college was the right next step for her, but eventually concluded that it was. “I discovered that I really loved learning and so that’s why I chose to come to Calvin,” she said.

First-year student Sarah Kwon decided to defer two years before officially enrolling at Calvin. After graduating from high school in the U.S., Kwon attended community college in the 2019-2020 school year. When classes went online during her second semester, she decided to go back to South Korea to be with her family and finish taking the classes remotely.

“My grades weren’t that good and I didn’t find myself motivated enough in community college. So I just talked a lot to my parents about what to do next,” Kwon said. Her initial plan was to take science classes in community college and then pursue a chemistry degree in university. She soon realized that was not the path she wanted to follow. “I was trying to figure out my major,” she said. By November of 2020, Kwon knew she wanted to major in classical studies, so she focused on studying Latin in 2021.

During her gap year in Korea, Kwon met with a tutor to study Latin, worked at a coffee shop and spent time with her parents whom she hadn’t seen since high school, as well as her friends.

“I got to celebrate my birthday, my mom’s birthday and my dad’s birthday together. That was really nice,” Kwon said. After coming to college, Kwon did notice a change, however. “The downside, well, I do feel kind of behind. My friends who are in school are like juniors now,” said Kwon. “I’m okay but I kind of feel like people don’t let me be okay with that.”

Senior Jenny Shin also spent last year in Korea. She went home in the summer of 2020, but her parents suggested that she not return immediately to the U.S. due to how fast COVID-19 was spreading. Shin struggled with online classes when they went remote in the spring, so she decided to wait a year to come back to campus and attend classes in person.

She took that time to re-evaluate what she was studying, noticing that she lacked motivation and passion for studies in her major, human resources management.

“I wasn’t sure if I liked my major or if I could, you know, pursue it in my future career. So mostly I thought I’d take a time off to think about that and take a rest from my studies to … relieve the stress and revive the passion to study again and find what I’m actually interested in doing,” she said.

Throughout that year, Shin taught at a small Christian international school in Korea. “The highlight was being able to get work experience while I’m still a student,” she said.

Other students, like junior Delvin Fernando, chose to take only a semester off due to the pandemic. He realized online classes were not going well for him, so he went back home to Indonesia. “I decided to just save money because all my siblings were also coming home and I just didn’t want to burden my parents and I decided to work instead. So I took a gap semester,” Fernando said.

Fernando started with teaching at his local high school and ended by starting an educational business with his friends. “Basically we reach out to schools to cover for their extracurricular classes because no one’s teaching life skills like thinking skills, networking skills, communication skills … we have a deal now with one school which is why I’m teaching at midnight to 1 a.m. in the morning here,” Fernando told Chimes.

Fernando acknowledged that it would not have been possible if he hadn’t taken the semester off. “I have two partners and one investor. They’re all in Indonesia and they’re my high school friends,” Fernando said. “We reconnected because I took the gap semester.”

Looking back, Fernando said he has no regrets: “I feel like the highlight was I learned so many lessons that can’t be found or taught at universities.”

In retrospect, Post related to Fernando’s experience. “I think my goal was to figure out what I wanted to do with the rest of my life. But it became so much more than that when I went.”