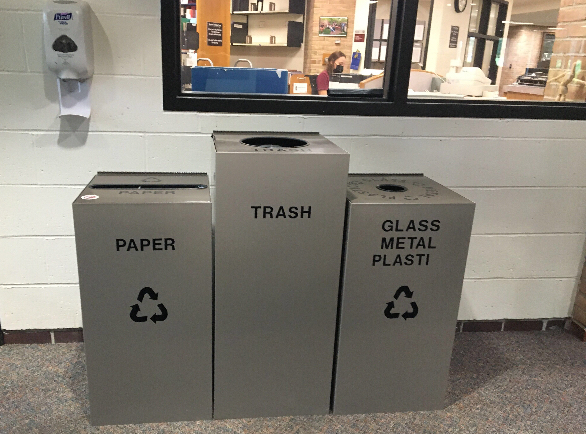 The Calvin community is ready to bring back recycling, but facilities contractors don't have specific dates or plans.

During the pandemic, recycling on campus came to a standstill. National Management Resources Corporation, the company to which Calvin outsourced its facilities management during the summer, is looking to soon reverse that trend and help make Calvin more sustainable again.

However, Earl Casto, the new facilities director, admitted that he doesn’t “have any specific dates on implementation and what exactly will be implemented” in regard to recycling.

Like many other companies right now, NMRC is facing a shortage of workers. At the start of the semester, the grounds crew was at 85 percent capacity, maintenance at 75-80 percent and housekeeping at 50-60 percent. But hiring has picked up recently. To help close the gap, NMRC decided to employ a number of students.

Although there are currently recycling bins around campus, recycling is not being collected on a regular basis yet. According to Casto, NMRC is currently waiting for Arrowaste, a local full-service garbage and recycling company, to place four more recycling bins at different key locations on campus in around the next week. Arrowaste will also be responsible for taking those bins off site when they are full. This is how Calvin handled recycling before the pandemic.

To handle shredded paper and the cardboard generated from numerous boxes on campus, NMRC is switching to a new company, Grand Rapids Iron and Metal. GRIM will pay Calvin for the use of its corrugated cardboard, and this money will help reduce the bill from Arrowaste.

The Calvin community is ready for the transition.

Melissa Smith, director of operations for Dining Services, said that she and her team are excited about resuming recycling efforts. They had to pause recycling during the pre-vaccine phase of the pandemic.

“We have a new production manager, and he hates seeing all of the cans and the plastic going in the trash,” she said. “And so he takes them home and he recycles them.”

Likewise, Linda Naranjo-Huebl, professor of English, says that some faculty are taking paper home to recycle.

“Paper is very recyclable — and abundant at an academic institution — so it stings all the more that we are not even recycling paper,” she said.

In the meantime, Casto urges students to do their part by making sure trash doesn’t get into the recycling.

“My experience in higher education is that a lot of times recycling’s mixed with food and other garbage. And at that point, it’s no longer recyclable. Some places won’t take pizza boxes, because it’s got the oil and the grease and food on there,” he said.

Eva Heetebrij, a student sustainability coordinator, has a few suggestions of her own.

“Get reusable containers. Try not to order a whole lot of stuff online. A lot of times, companies will put a little recycling sign on their packaging, but it’s not actually recyclable. So it kind of tricks consumers,” she said.

She also reminds students to use their voice and make their concerns known if they care about sustainability and are unhappy with the current situation.

“Bug the administration to make [recycling] a priority,” she said. “The biggest thing you can do is just go straight to the top.”