Concerts are back on campus. Proof of vaccination required 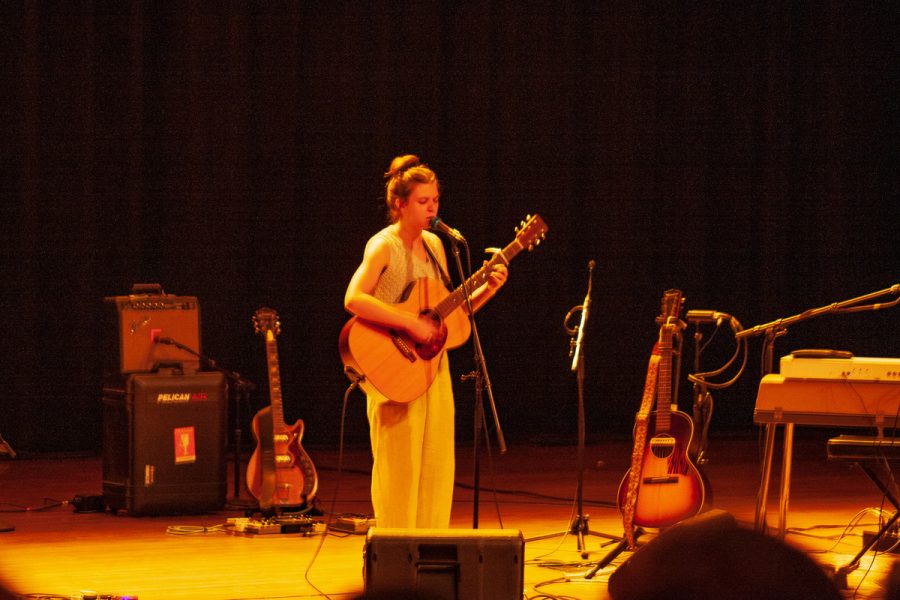 Tomberlin kicked off the first in SAO's concert series.

Concert-goers gathered in the Covenant Fine Arts Center lobby last Wednesday, just as they have since the Student Activities Office was founded over 25 years ago. But this time, they had to produce both a ticket and proof of COVID-19 vaccination in order to enter.

As the first SAO concert open to the public in a year and eight months, the show, headlined by singer-songwriter Andy Shauf, set the stage for the routine to come. Either a vaccine card, a picture of a vaccine card or proof of a recent COVID test will be required at every show this semester. Artists may opt to only allow vaccinated guests and not recently tested unvaccinated guests, as Shauf did.

It’s been a tough season for live music. Last year, before vaccines were widely available, five of SAO’s concerts were canceled due to COVID complications, according to SAO student worker Timothy Stephens. The few that did happen were only open to the Calvin community and several that had been in the books since 2019 and early 2020 were postponed.

“It’s a very gut-wrenching thing,” Stephens said about cancelling shows. But SAO staff have learned from the experience. “This is no longer our first rodeo.”

Wednesday’s concert brought in about 200 people, including about 50 Calvin students, according to SAO director Jack Droppers. The opening act was singer-songwriter Tomberlin, who named the surrealness of performing again after stretches of quarantine.

“Wow, talking in front of people again is wild,” she said between songs.

Quiet at first, the crowd became more responsive by the end of the headliner’s set, eventually giving Shauf and his band a standing ovation and calling for an encore. The musicians obliged. For several students, the show was a celebratory return to live music.

“This is my first concert since the pandemic,” said first-year student Shawna Stoneburner. “It feels amazing.”

“It’s really refreshing,” said first-year student Grace Poortenga. “We haven’t really had that in a while.”

Sophomore Josiah Elstrom approved of SAO’s COVID precautions. “I think the way they’re doing it is very careful and informed,” he said.

The feat of keeping the concert series going hasn’t been simple, though, according to Droppers.

“There are a lot of barriers in the way of putting on shows,” Droppers said, noting that the event services department has less staff than usual. He also said that restrictions like checking for proof of vaccination will inevitably hurt turnout. “The right thing is not always the easy thing,” he said.

Nevertheless, SAO has six more concerts lined up this semester, including one this Saturday with folk rock band Dawes.

One highlight of the lineup, according to Droppers, is Joy Oladokun, who’s performing at Calvin on Oct. 28 and has nearly two million monthly Spotify listeners.

“When Phoebe Bridgers came here three years ago, only 24 Calvin students purchased tickets for the show,” he said. “If they don’t want to miss out on the next Phoebe Bridgers, they should show up for the Joy Oladokun show.”

For Calvin students, all SAO concert tickets cost five dollars, no matter how much they cost for the general public. They can be purchased on the university’s box office web page.