Changes to enrollment strategy a step in the right direction; efforts continue 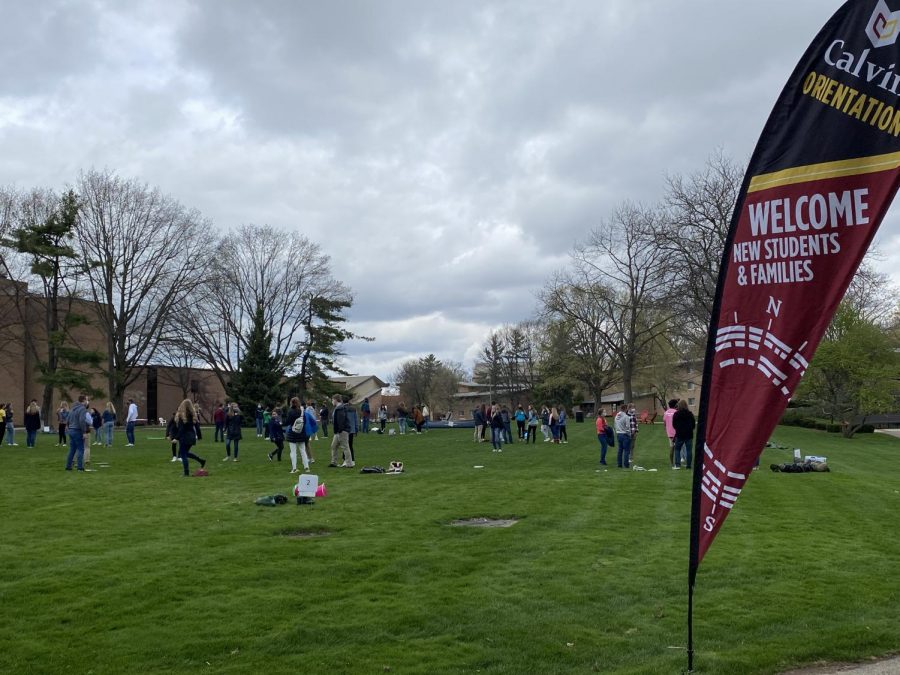 Members of the class of 2025 gather on campus for one of the few in-person admissions events last year.

This year’s recruitment cycle saw a record number of applicants and a growing first-year class for the first time in eight years. But the future is anything but certain. Members of the enrollment division are working hard to ensure this year’s success will be repeatable.

“There’s no silver bullet,” said Lauren Jensen, vice president for enrollment strategy. “Our team is looking at all the little indicators that move the needle just a little bit, and together those lead to growth.”

Among the “little things” are the decision to make applications test-optional, financial aid initiatives like the Calvin Promise, and a new philosophy behind campus visits.

At the height of the pandemic, COVID-19 made it difficult for high school seniors to take standardized tests like the ACT or SAT.

“We didn’t want people to not apply or be stressed about applying if they didn’t yet have their test scores,” Jensen told Chimes.

So, the enrollment division got permission from Faculty Senate to waive test scores for the high school classes of 2021 and 2022. It’s worked so well that Jensen hopes to propose a more permanent shift sometime this winter.

The division also introduced the Calvin Promise, which guarantees at least $21,000 a year in financial aid to applicants with a high school GPA of at least 3.8.

To follow through on this promise, the university increased the size of its merit scholarships.

“What is especially great about the Calvin Promise is that it clearly showcases our best offer to a student — no guessing about how much they’ll get — it’s simple and generous,” said Melissa Rousseau, director of undergraduate admissions.

COVID-19 forced the enrollment division to reconsider all of its standard practices for campus visits. The most successful events during the pandemic weren’t informational; they were entertaining.

According to Jensen, Discovery Days are all about experiencing life on campus.

“If they want more information, they’ve either already gotten it or they’re going to get it from us in a different setting,” she said. “So, we don’t want to repeat what they’ve learned by reading our emails or watching our videos.”

Instead, prospective students sit down with coaches and professors, attend practices and tour spaces like the Center Art Gallery or the university’s makerspace.

“We strategically built events that were smaller, bite-sized experiences that helped them learn and feel the right amount at the right time,” said Rousseau. “We also used a variety of in-person and virtual programs that provided schedule and safety flexibility and also served our out-of-state and international populations in a more accessible way. Recruitment for 2022 will look much the same.”

Internally, the enrollment division also made some changes to the way it operates.

Two years ago, the division was renamed from Enrollment Management to Enrollment Strategy, a significant shift in how team members and leaders thought about recruiting prospective students.

“In many ways, the success this year is about that shift to focus on strategy,” said Jensen. “Calvin’s enrollment team set a series of strategies and tactics in place and tracked regular progress on those goals.”

In addition to focusing on populations where Calvin is well known, the division worked with analytics experts to target locations where Calvin might be an entirely new name. The intent of the new strategy was to increase applications and interest at the top of the enrollment funnel.

With an all-time record of 4,000 applications this year, the strategy paid off.

Senior leaders within the division also began meeting weekly to assess their progress towards boosting enrollment.

“They all thought I was crazy when I said we were going to grow this much, but we set some clear goals and they came along and did fabulous work,” said Jensen.

Concerns for the future

Growth, however, doesn’t guarantee every program will have the enrollment it needs to thrive. Despite increasing first-year enrollment, the university still cut programs this summer, including German and classical studies.

In a conversation with Chimes, Averie Wright, who left Calvin this June after two years as an admissions counselor, cautioned the university to keep a careful eye on where and how it’s growing.

“The enrollment numbers can increase, but if they increase in such a way that certain departments still have to be cut, then we can have a successful enrollment goal but fail to uphold the liberal arts image that Calvin has formed for itself,” Wright told Chimes.

According to Wright, smaller departments often have higher yield rates due to their uniqueness. For instance, a few years ago, nearly all students who expressed interest in Calvin’s Japanese program on their applications wound up coming to Calvin.

“Calvin’s Japanese program was so unique that when students were interested and they applied, they were pretty much set because they didn’t want to go anywhere else,” the former admissions counselor said. “… There’s a lot more agency to what we can do about the cuts in departments rather than just saying there weren’t enough students.”

The Japanese major and minor were eliminated in the summer of 2020 due to budget and enrollment concerns.

It’s a problem Jensen is aware of. There’s simply less demand for niche programs, even in the new populations the university is targeting. Once prospective students are on campus for a visit, admissions staff work hard to connect them with the faculty and programs they’re interested in, and the enrollment division recently optimized Calvin’s website to be more accessible for students simply searching for programs of study.

“If you’re interested in something specific, we want it to lead you to Calvin. We don’t want you to just find out about it once you’re here,” Jensen said.

But Wright thinks there’s more to be done for small programs in terms of targeted recruiting strategies, saying: “We have to actively look at what we’re doing to make sure that we’re supporting these departments properly.”

Though Wright admitted that the number of students interested in specific programs at Calvin can be a limiting factor, he recommends the university be even more strategic in connecting students and departments.

As the division looks to the year to come, it’s aiming to again increase the number of applications received, though Jensen declined to give specific goal numbers.

More than 20 international students are also expected to join the class of 2025 in the spring, Jensen said. These students had difficulty obtaining the required visas and paperwork from their home countries in time for the fall semester. Admissions staff hope it will be easier for international students to come to Calvin as pandemic restrictions wind down.

One of most notable trends in the Day 10 report released last week, according to Jensen, was a decrease in the percentage of alumni children at Calvin despite a growth in number. This means that students from non-traditional populations are coming to Calvin at a faster rate than from alumni families, even though both are growing.

The enrollment division hopes to continue this trend in the next cycle by reaching out to schools in current markets, like the state of Michigan, that haven’t traditionally been part of Calvin’s audience, like Catholic and public schools, which became an important part of last year’s strategy.

Jensen was also excited by the work of the two diversity recruitment and engagement coordinators in the division. These positions were introduced over the past two years and help other admissions counselors think about ways to recruit more diversely.

“This could not have happened without a whole team of people really looking under every rock and considering everything and being willing to do a lot of heavy lifting,” Jensen said. “This growth is surrounded by a phenomenal team in the enrollment division that rose to the challenge.”